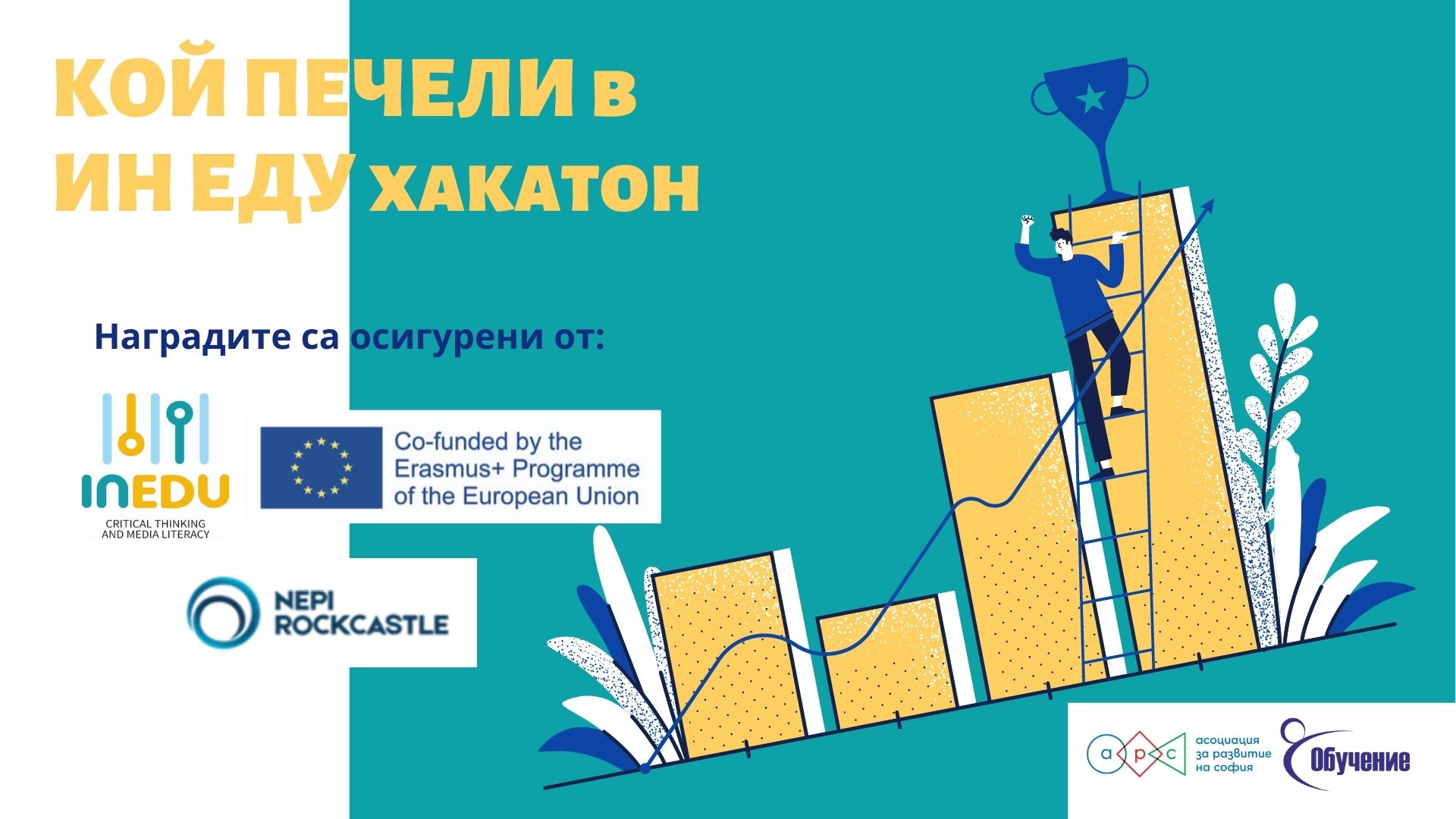 After the official opening of the Hackathon and the special welcome by the well-known in Hollywood Bulgarian actor Dimitar Marinov, the students immersed themselves in the topic of media literacy and its importance. They spent the next 4 days in meetings with inspiring mentors and hard work. On the finals, all 14 teams presented innovative solutions to the problems of fake news, online communication, hate speech, critical thinking and information chaos.

Nearly 100 students from all over Bulgaria, full of enthusiasm to gain new knowledge and to win, took part in the competition. Not only did they want to create meaningful campaigns with interesting and creative content, but they also showed that they had the skills to do so. 14 diverse and meaningful projects were presented attractively and convincingly to a competent jury. The teams have developed digital, meaningful and colorful distribution materials, strategies for engaging target groups and most importantly great ideas.

For the members of the jury it was much more difficult to decide which the best projects are than to train the participants how to develop them. However, they performed both tasks. Nadia Obretenova from the Bulgarian National Television, Yavor Gochev from the Rinker Center for entrepreneurship and training, Natanail Stefanov from SofiaTech, Ana Aleksieva from Fine Acts, Georgi Apostolov from the National Center for Safe Internet, Denitsa Lozanova from the Sofia Development Association and Ivaylo Ivanov from DZZD Obuchenie were the experts in the field, which had to make the hard decision.

The hearts of the audience were won by the team "Messengers" from the National School of Finance and Economics, Sofia. They are the favorite of over 1,200 voters and due to this reason won a prize of BGN 1,500.

Although the Media and Information Literacy Hackathon is over, we have yet to reap the benefits. The won funds will be used by the teams to carry out their campaigns in the period February 5, 2021 - May 5, 2021, and then the best realized campaign will win BGN 3,500! Good luck to all!

Follow the facebook pages SofiaLab и IN-EDU project to learn more about the development of the campaigns.

The hackathon is organized by Sofia Development Association and DZZD Obuchenie in the framework of INclusion Communities through Media Inclusion and Critical Thinking EDUcation (IN-EDU) project, co-financed by the EU Erasmus + Programme. 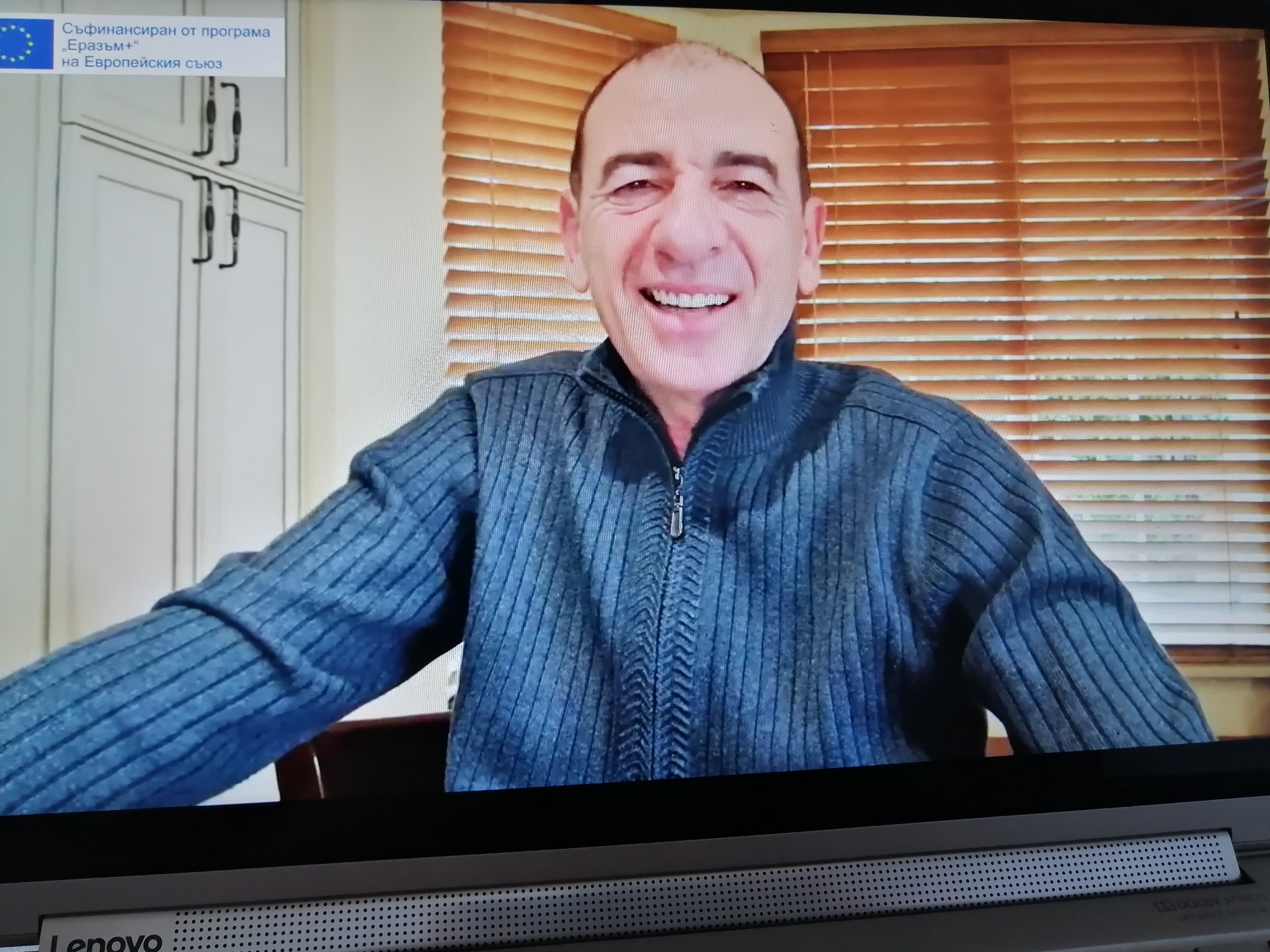 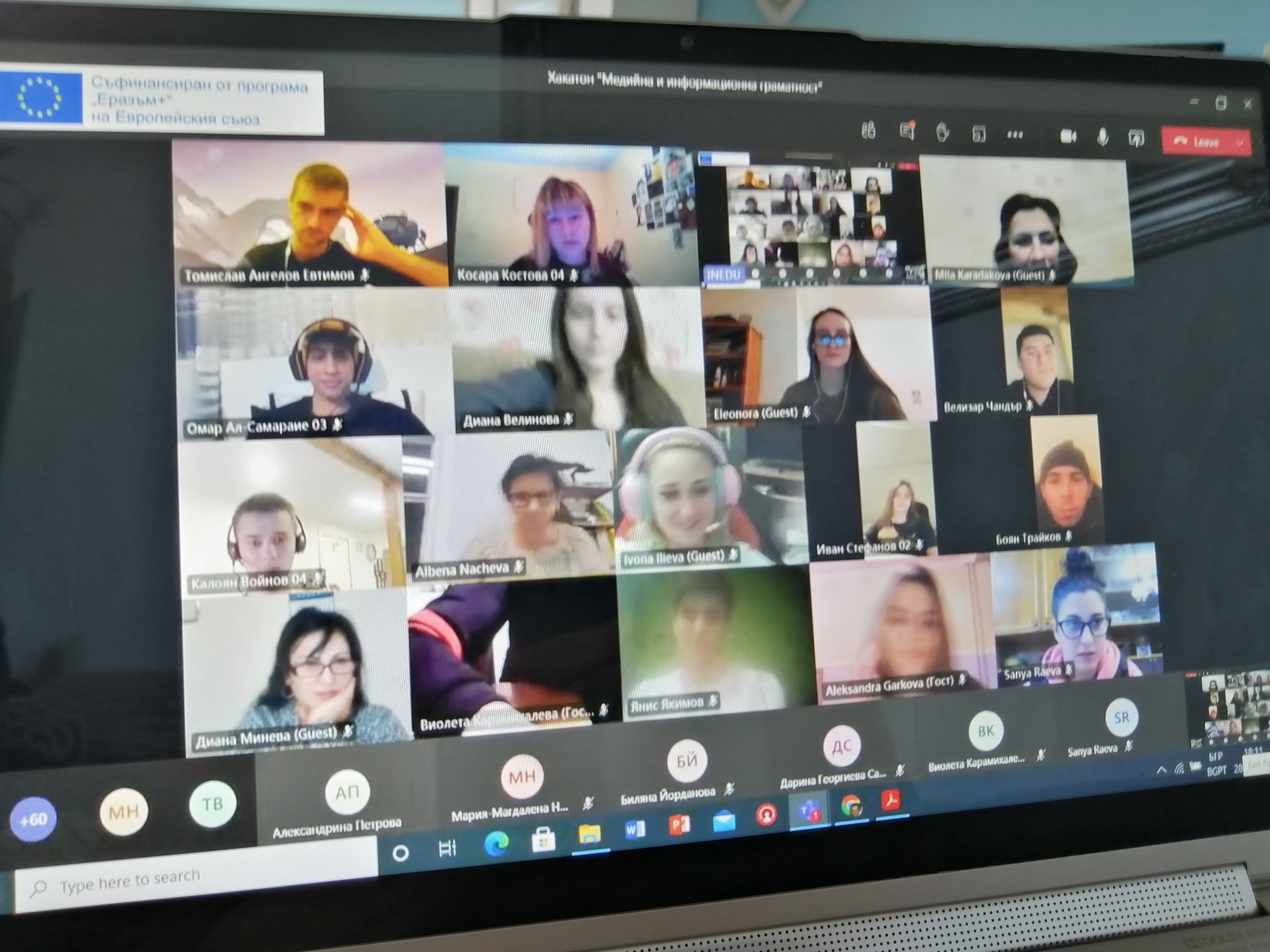 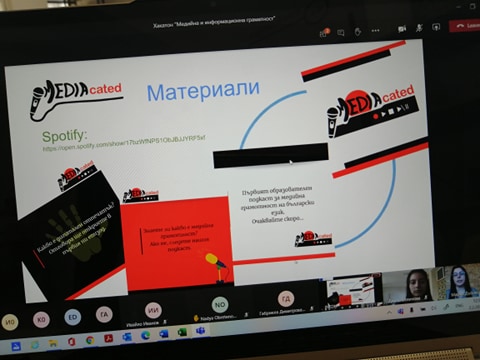 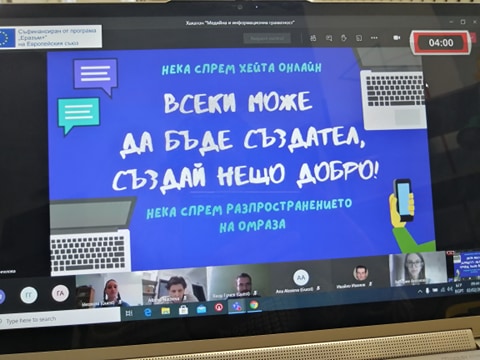 THE "TOPLOCENTRALATA" PROJECT AROUSED THE INTEREST OF THE AGORA PROJECT PARTNERS

On January 29, 2021, a training seminar was held in the framework of AGORA project, during which Sofia shared its experience in regeneration of urban spaces. Sofia Development Association introduced the partners to the project "Toplocentralata", which is implemented thanks to the Sofia Municipality.

The aim of the project is to turn the former heating plant of the National Palace of Culture into a center for contemporary arts, which will provide conditions for a wide range of artistic events (theater, music, dance, visual arts), as well as for educational and social activities. It will support independent artists by giving them more opportunities to collaborate with foreign colleagues. The idea for "Toplocentralata" comes from the artists themselves and its aim is to become a good practice for creation of independent cultural spaces in Sofia, which can be replicated elsewhere in Bulgaria.

The partners were impressed not only by the success of the grass-route initiative and the bottom-up approach , but also by the great interest in the international architectural competition for reconstruction of the building, through which the project "Toplocentralata" was selected.

AGORA is going to help to clarify the functions of the site, to identify potential users and audiences, to give ideas for smooth and effective integration of the space in the surrounding park and to generate ideas for programming and promotion of the future cultural center.

If you would like to learn more about the “Toplocentralata” and AGORA projects, you can watch the video HERE. 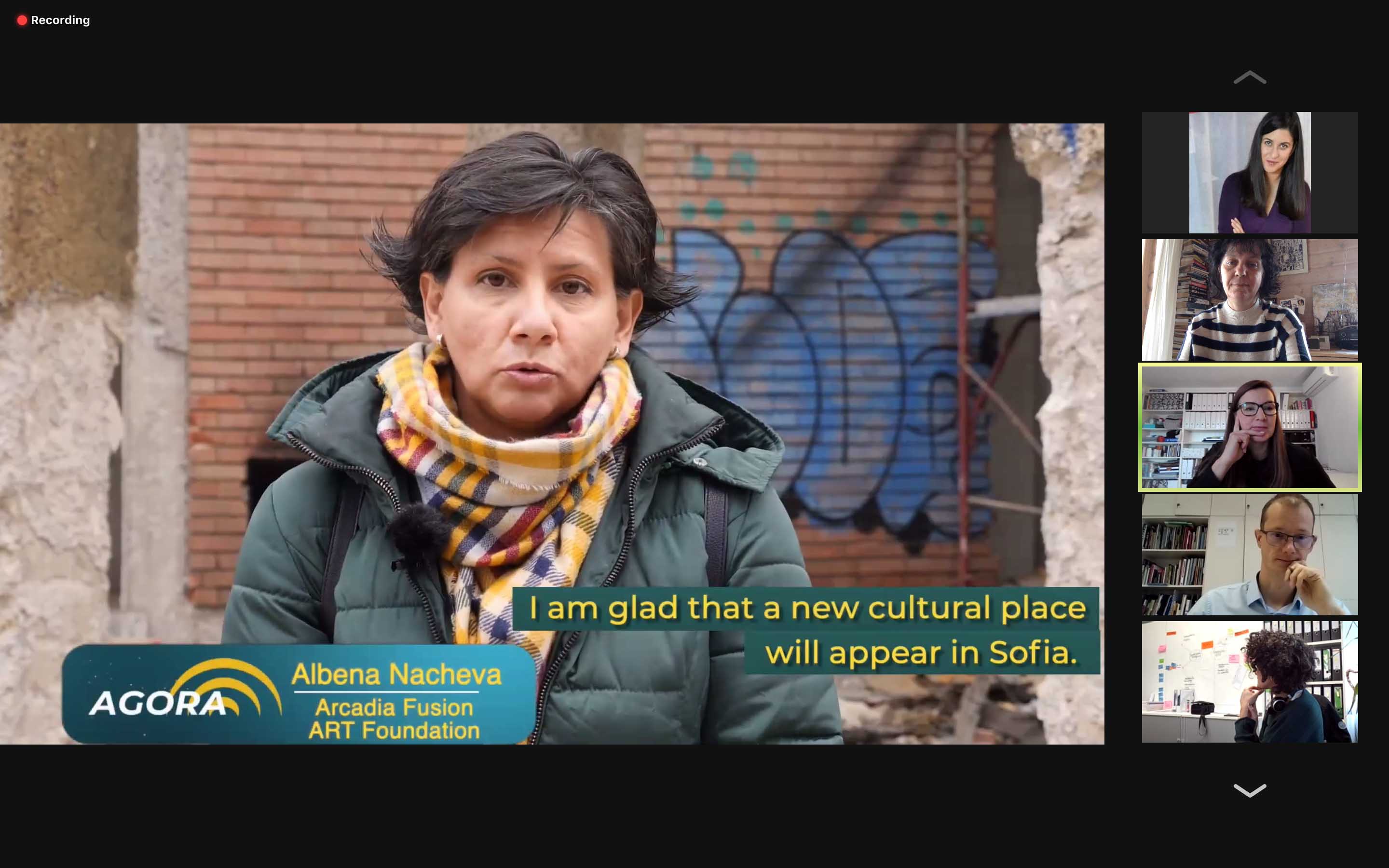 Responsible Research and Innovation in Territorial Governance and Leadership

What does it mean to integrate the principles of responsible research and innovation (RRI) in long-term strategic visions for territorial development? How can public bodies, research organizations, civil society actors ensure that local and regional development policies are inclusive, anticipative, and responsive? The importance of leadership in territorial governance innovation and taking responsibility for future policies, tackling existing challenges and consolidating societal actors’ knowledge towards a shared policy goal and a coherent action plan, and much more, is at the center of the new project RRI Leaders, which SDA will be implementing in the next three years. Sofia is one of four “territorial partners,” together with cities from Greece, Spain, and Switzerland.

The 2-day kick-off meeting of the project took place online on Jan. 26-27, 2020. RRI Leaders is funded by Horizon2020, and is implemented by a consortium of 9 partners from five countries, led by the ARC Fund in Bulgaria.

What other advantages will bring you the participation in the Bulgarian Hackathon for Media literacy? 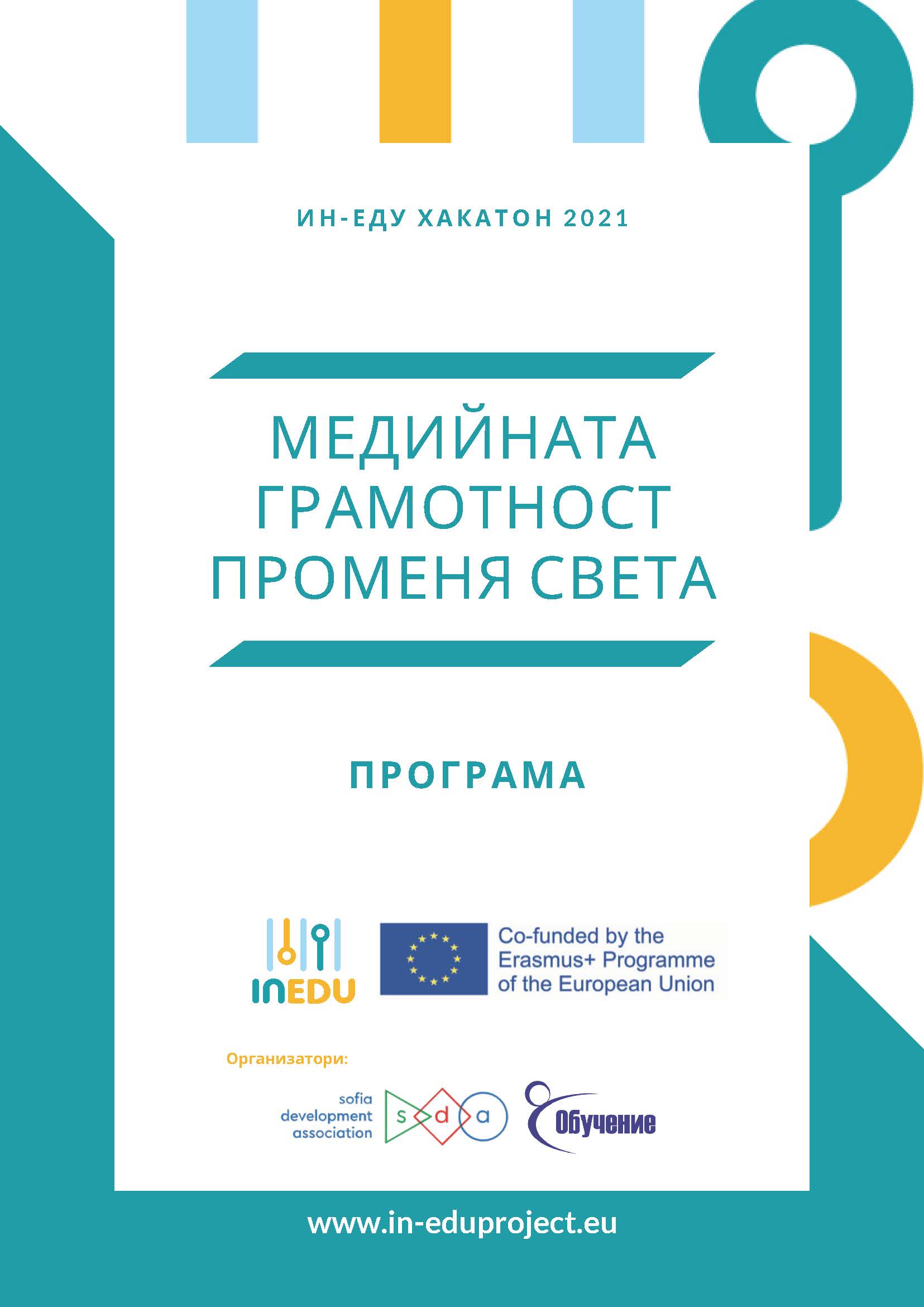 In addition to the opportunity for your team to win a prize fund of 9,000 euros, to implement a campaign and to help more people become information and media literate, each of you will receive another opportunity that is not to be missed. By participating in the Hackathon, you will become part of a mentoring program with well-known experts on the subject. And what is more important and useful than acquiring new knowledge and skills?

The hackathon will be officially opened on January 28, 2021, by the famous in Hollywood Bulgarian actor – Dimiter Marinov. He is going to share his opinion on the importance of media literacy nowadays. The next days we continue with mentorship program with experts on the topic.

Ana Aleksieva from Fine Acts is going to give you advice on how to create truly creative campaign and what resources to use. Nadya Obretenova – a journalist from the Bulgarian National Television is about to inform you how to detect and fight fake news and propaganda. Yavor Gochev from Rinker center for entrepreneurship and training is going to help you develop pitching skills, which you may use not only for the hackathon, but later on in your daily life. Georgi Apostolov, a specialist from SafeNet is going to present you the dangers in the network and how to overcome them. Last, but not least – you are going to learn how to make technologies work for you while supporting a social cause by Natanail Stefanov, Deputy Chairman of the Management Board of Sofia Tech Park.

The big final is coming. After 4 days of training, on the last day of the hackathon (February 2, 2021) the 14 teams, consisting of 94 participants from 7 towns in Bulgaria are going to present their projects to the jury and compete for the awards.

In order for the evaluation of the projects to be most accurate, they are going to be evaluated by a jury consisting of the trainers from the mentorship program.

The full program of the hackathon you may find HERE.

We wish you luck!

The hackathon is organized by Sofia Development Association and DZZD Obuchenie.

A Look into the Future – INNOAIR and Innovative Public Transport 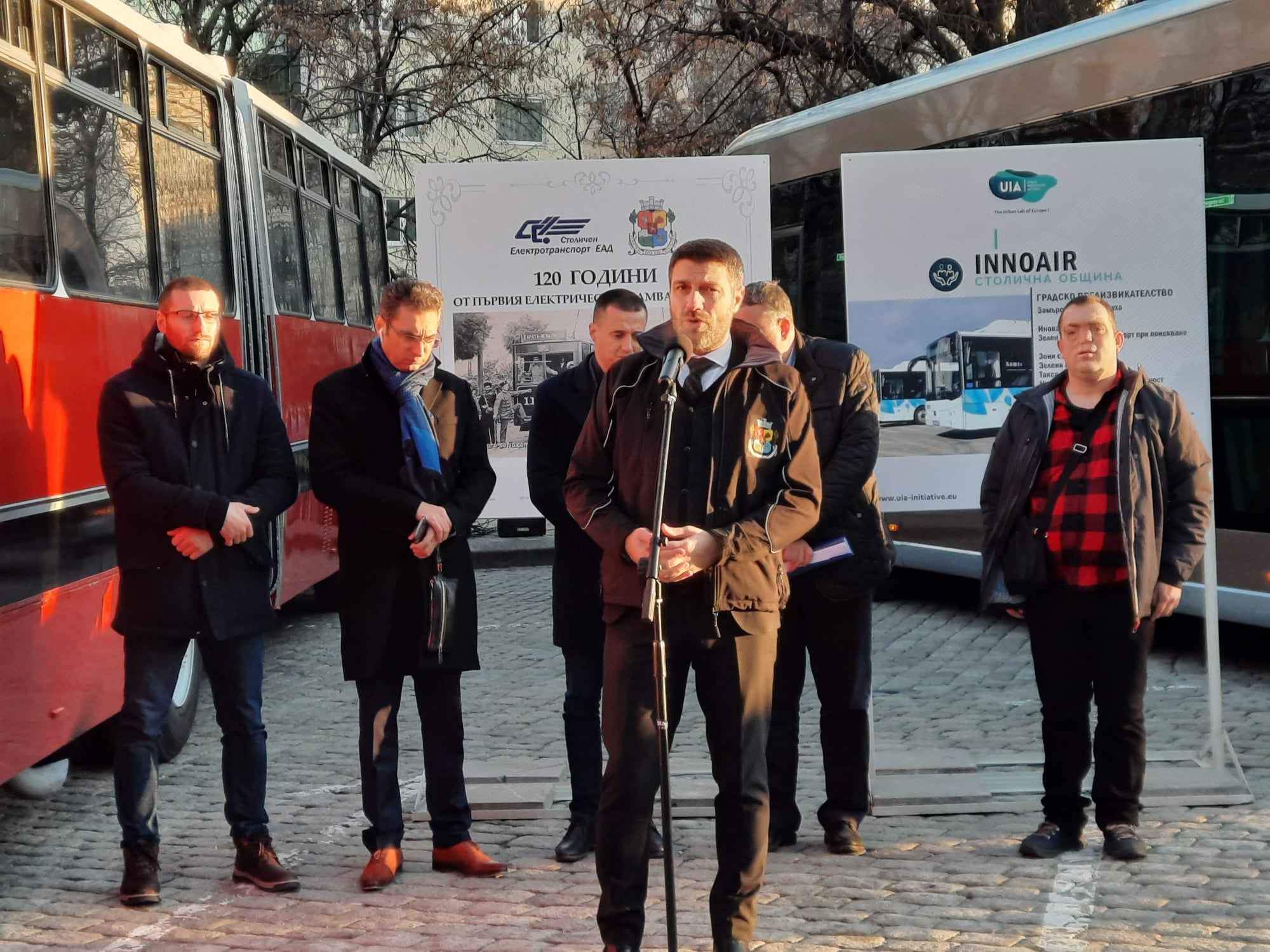 On January 14, 2021 an exhibition of vehicles was held on the occasion of the 120th anniversary of public transport in Sofia. Along with the stories about the transport from the past, the audience also got acquainted with the innovations planned for the future. The Deputy Mayor for Transport of Sofia Municipality Kristian Krastev introduced the attendees with the INNOAIR project and the activities that will be carried out within its implementation.

The most impressive among the activities is the provision of the service for an environmentally friendly public transport "on request". Instead of driving on pre-defined routes, the new e-buses will create route map based on citizen demand submitted via mobile application. The app will leverage machine learning and advanced data analytics to create the most efficient path for each ride, collecting as much passengers as possible.

This urban transport service will be tested for the first time in Europe and will be implemented together with a wide range of initiatives: low emission zones, green corridors, congestion charge, promotion of active mobility. This coordinated effort of the city administration, scientists, business and citizens will form a holistic approach to reducing air pollution and will change the way our public transport looks today. 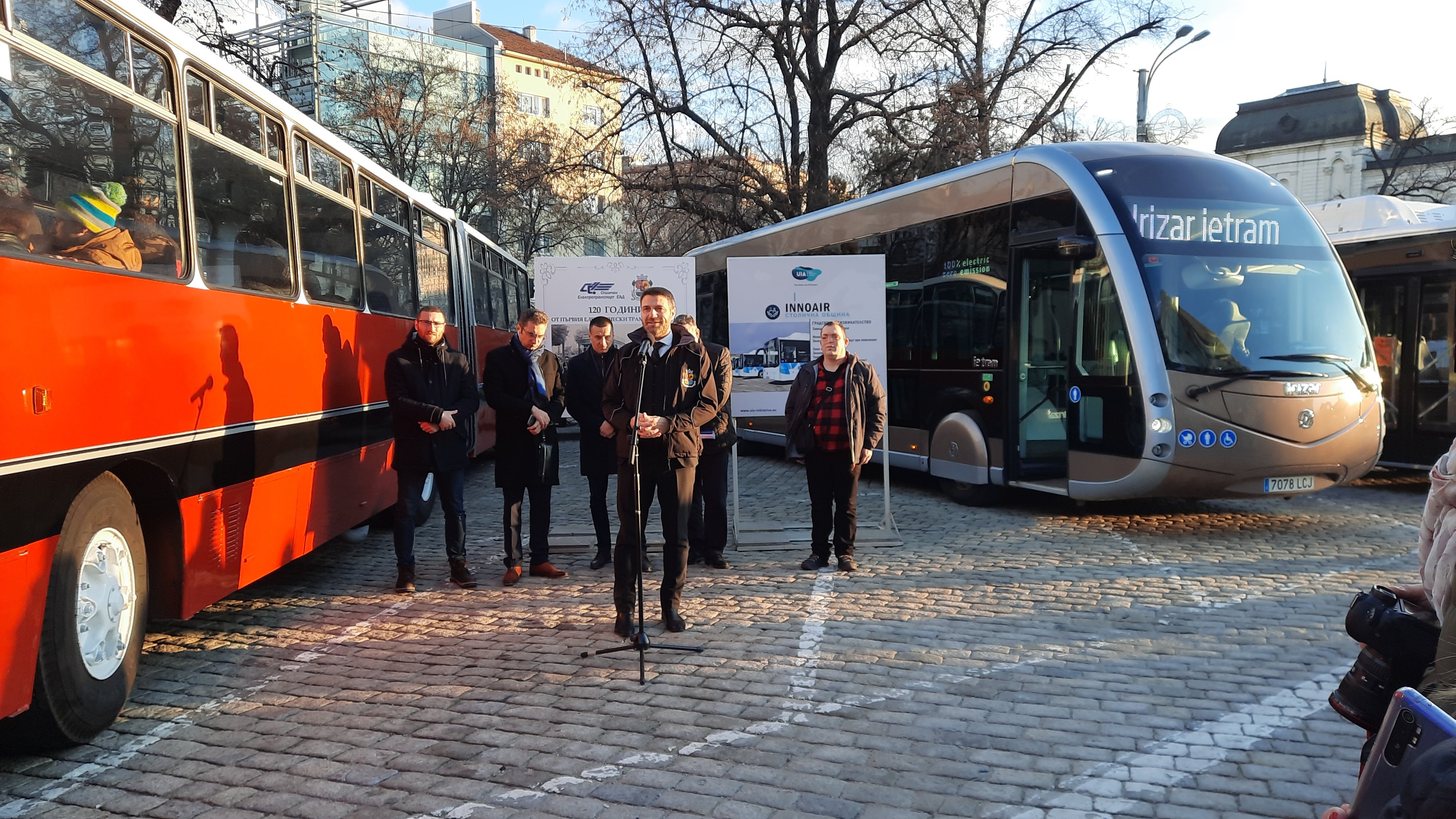 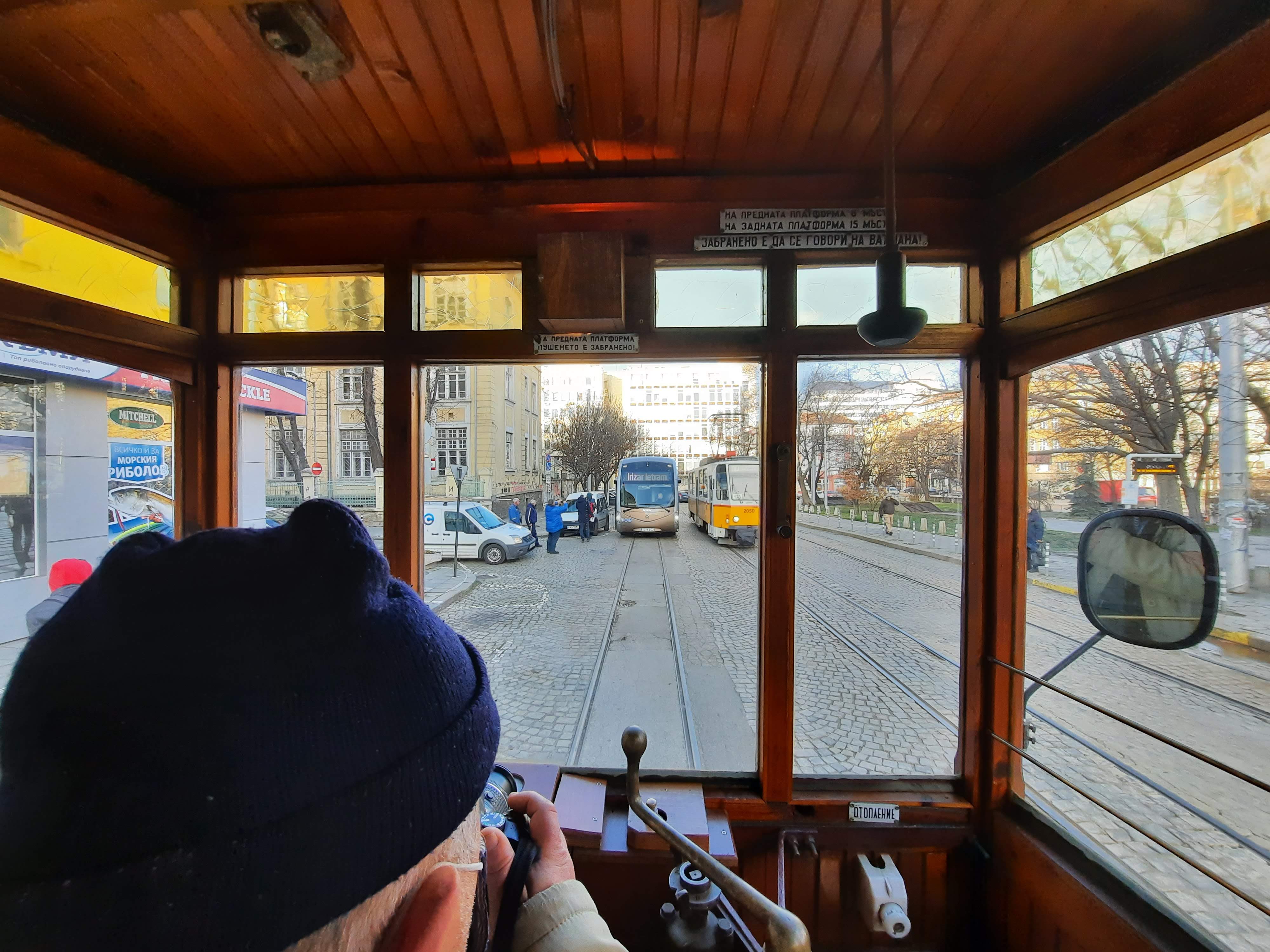 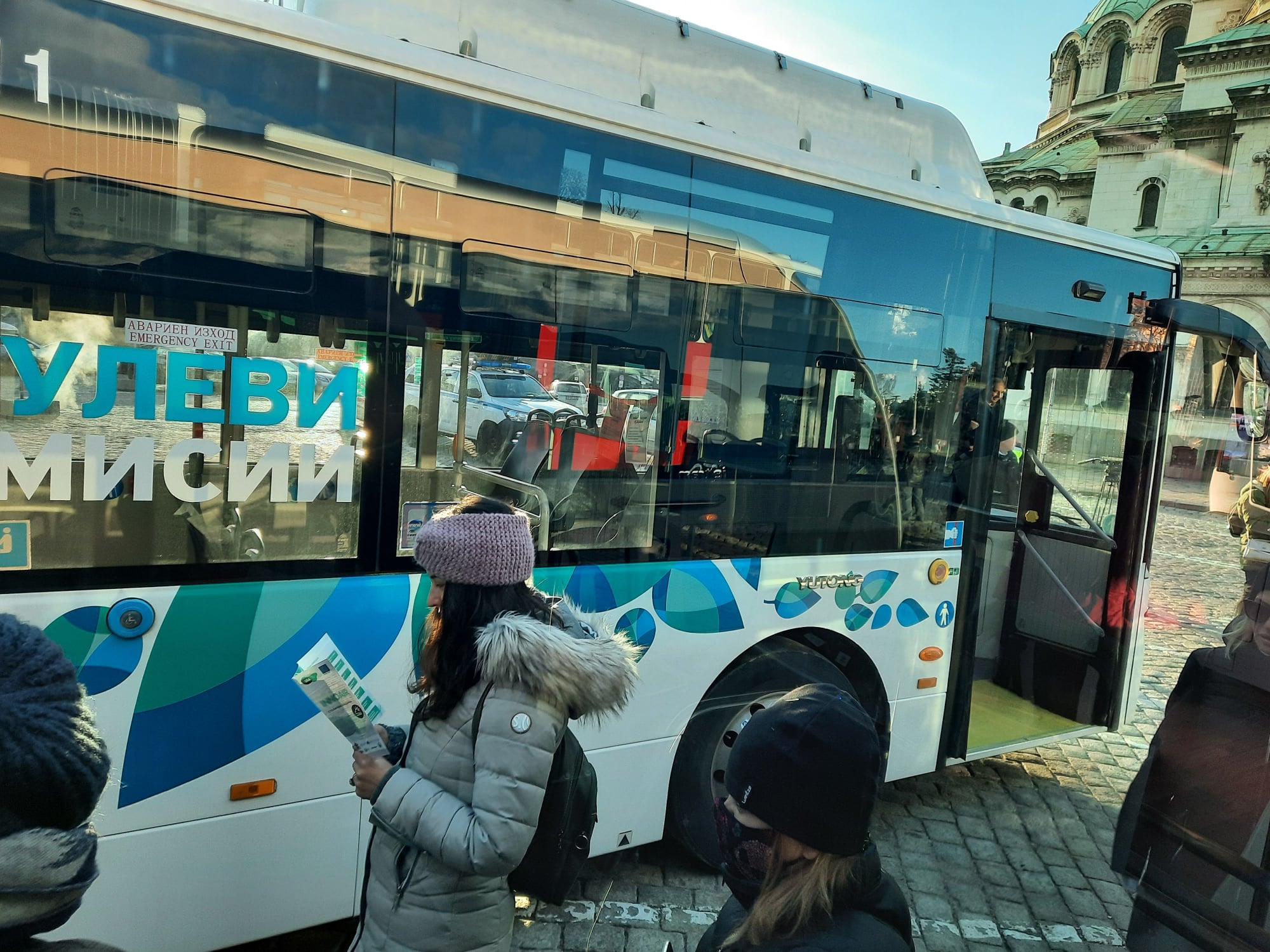 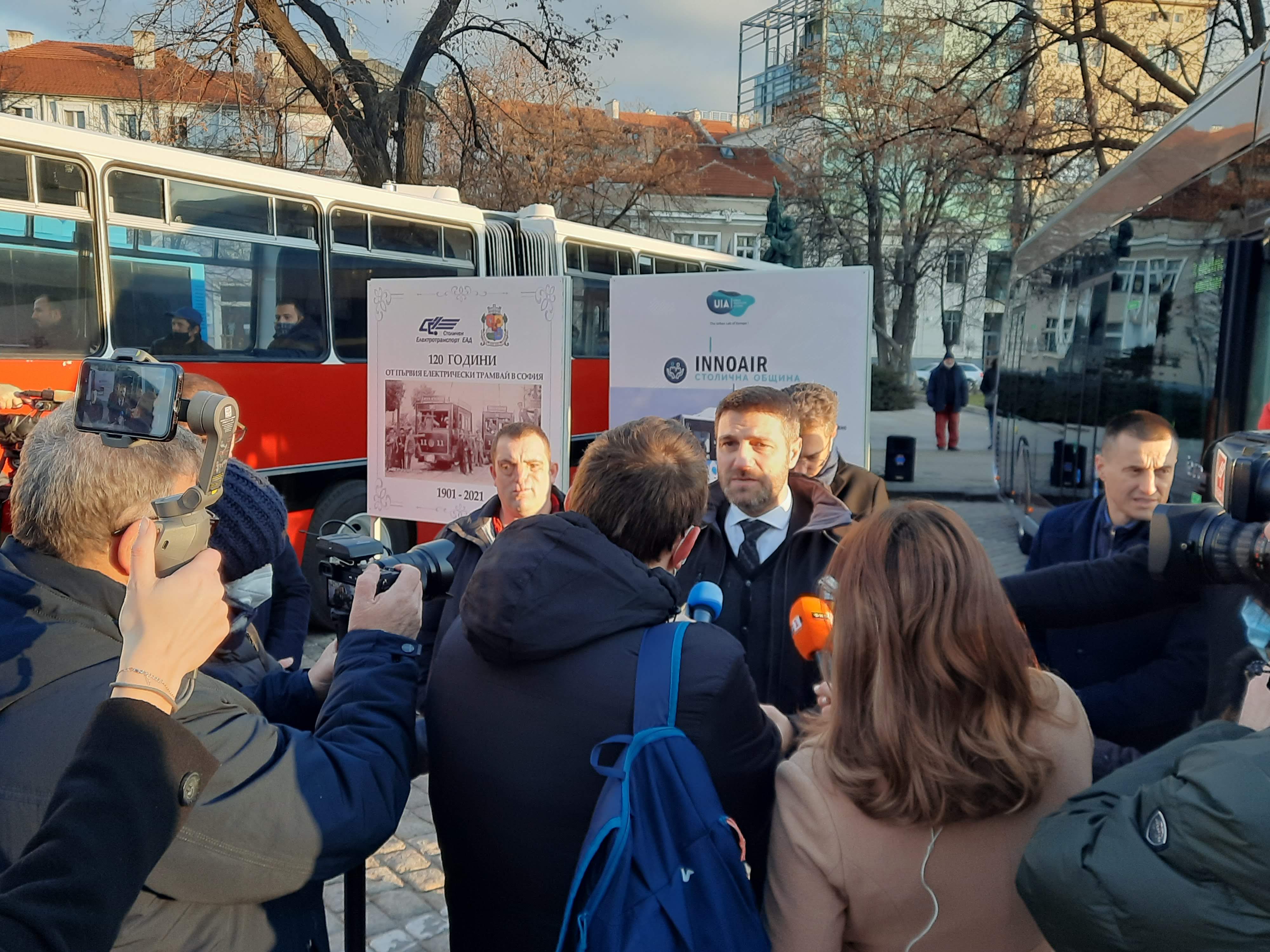 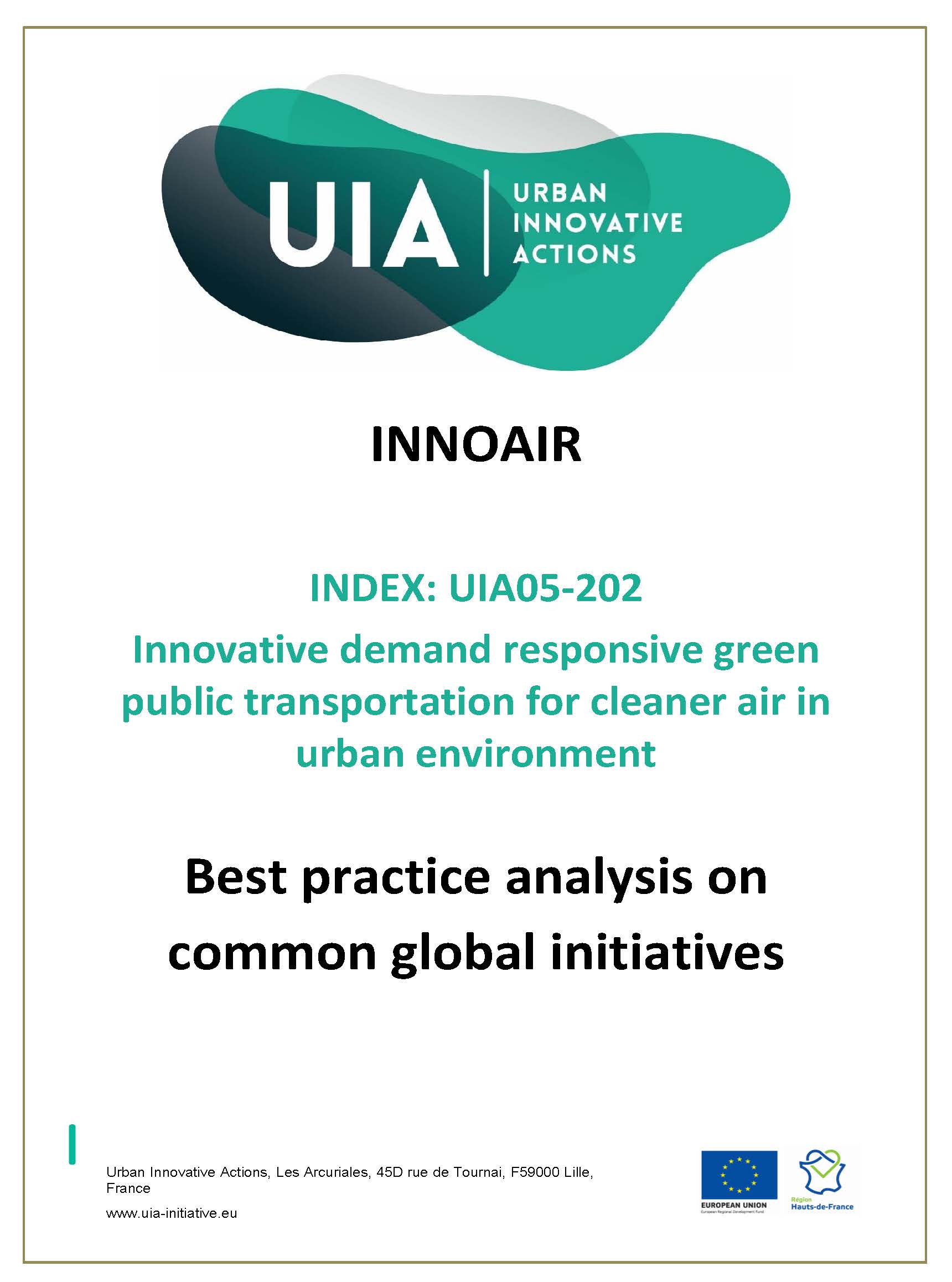 The INNOAIR team has produced an innovative research paper and it is pleased to share it with the public. The Best practice analysis on common global initiatives is now published and can be downloaded here. The analysis evaluates on-demand transportation initiatives and “transport as a service” approach in Europe and on a global scale to provide project partners and the general public with guidance on lessons learned and help them avoid mistakes during the project implementation.

This document, prepared by the National Association of Municipalities in the Republic of Bulgaria (NAMRB), contains a review of the trends in mobility solutions, related to the main innovation of INNOAIR, namely on-demand transport (with electric minibuses) combined with “mobility as a service” like technologies, low emission zones and congestion charging model. The analysis provides guidance for tested solutions, the challenges they address, main findings and results. That way interested parties could avoid past mistakes and use the information provided for further guidance and enhancement of the INNOAIR model.

The analysis starts by giving an overview of the general trends related to the main innovation of INNOAIR and continues by providing concrete examples of already established such innovations mainly in cities in Europe and around the world. The document ends by giving the main findings and lessons learned based on the already processed information in the previous sections.

For more information on INNOAIR’s outputs, including the recent publication of the Guidebook on air pollution interdependencies for various stakeholders, please check the project website www.innoair-sofia.eu.

INNOAIR is co-funded by the European Regional Development Fund through the Urban Innovative Actions Initiative.