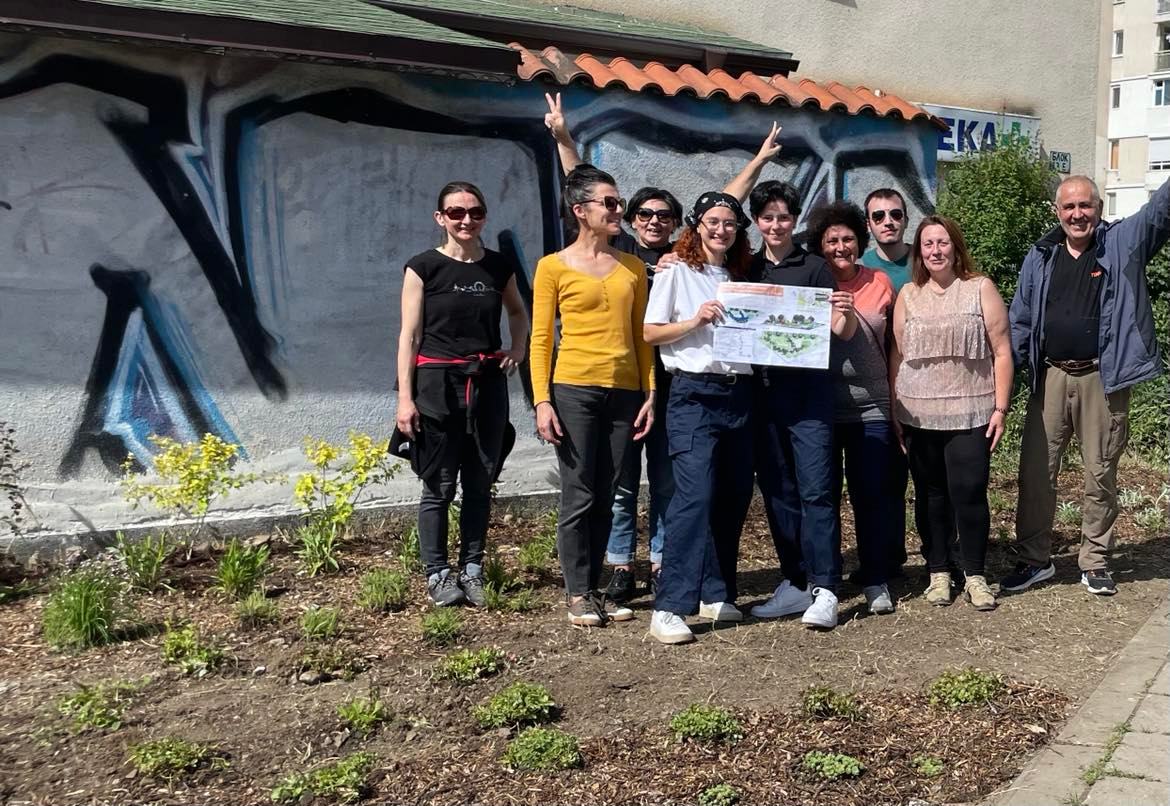 Even the best project would remain in the shadows if it is not implemented. That is why the Sofia Municipality and the Sofia Development Association provided appropriate conditions for the implementation of the project, which won first place in the student competition "Landscaping for cleaner air", held under the INNOAIR project together with the University of Forestry.

The students from University of Forestry had the difficult task to create a concept for the green area of ​​the newly built part of Todor Kableshkov Blvd., which includes diverse, easy to maintain vegetation that effectively purifies the air, helps protect local biodiversity and arouses year-round interest.

Simona Novoselska and Merlin Nezhdet presented a project for a beautiful flower space, which is further developing an already planted flower bed by the residents of the Triaditsa region. The plants selected by the students are gas- and drought-resistant, with dust-retaining ability and year-round decorative effect. For this reason, their project was ranked first among the worthy competition in the student competition.

On May 20, 2022, the project became a reality! The students took part in the planting and now the residents of the region have an expanded green area around Todor Kableshkov Blvd. The event was also attended by representatives of the Sofia Development Association and Sofia Municipality. 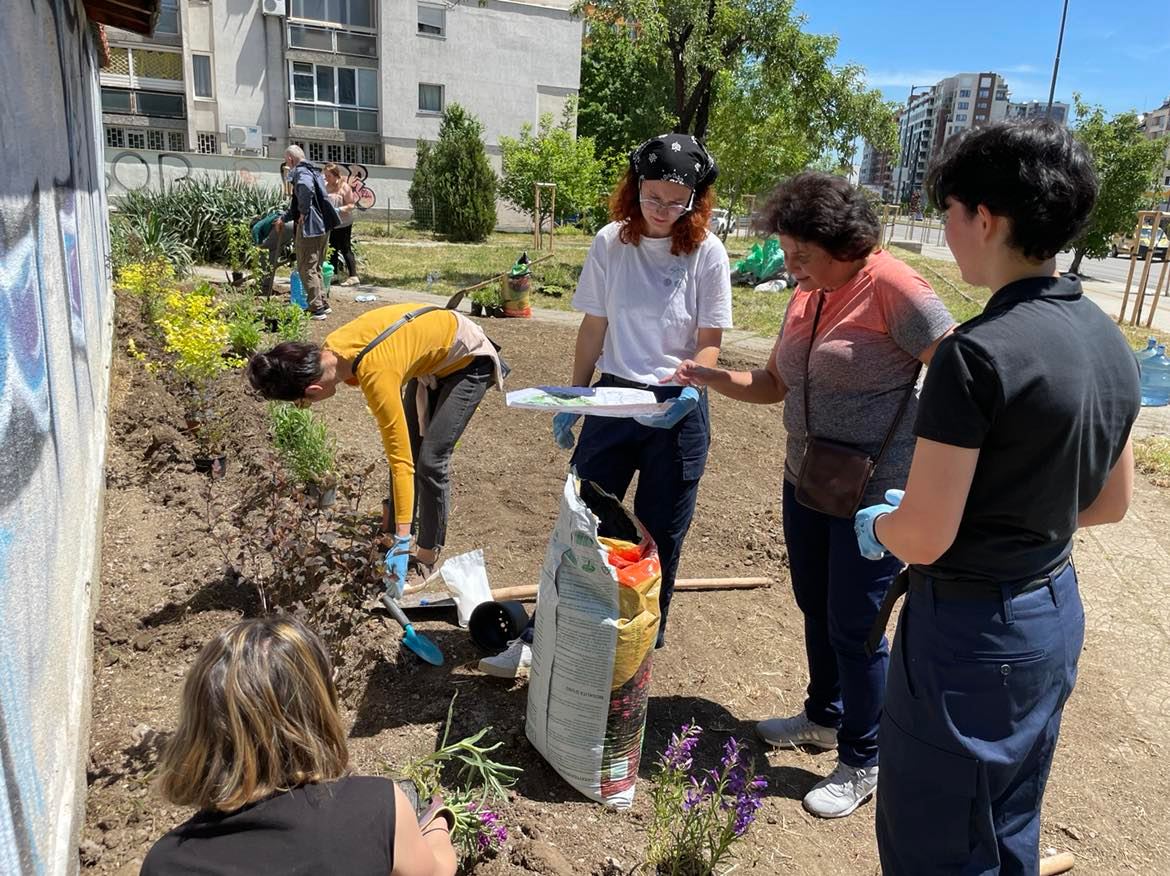 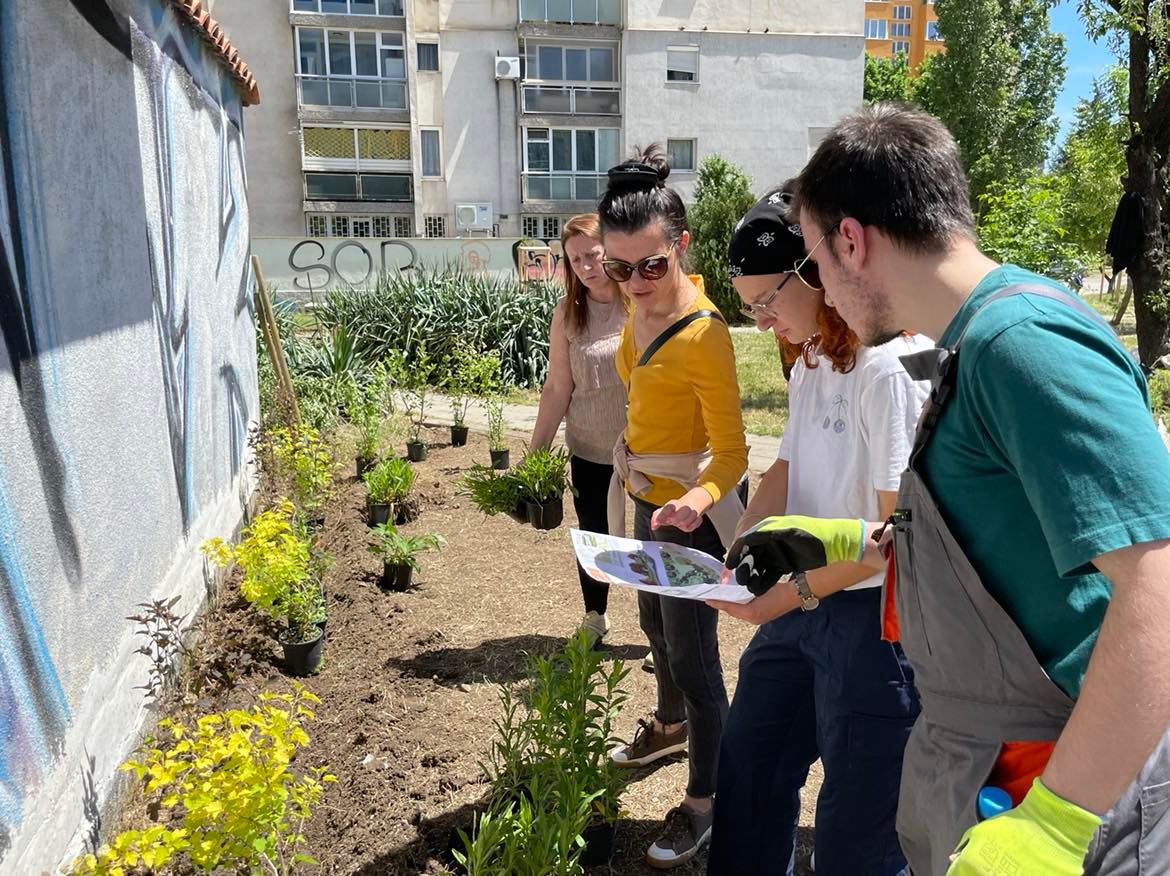 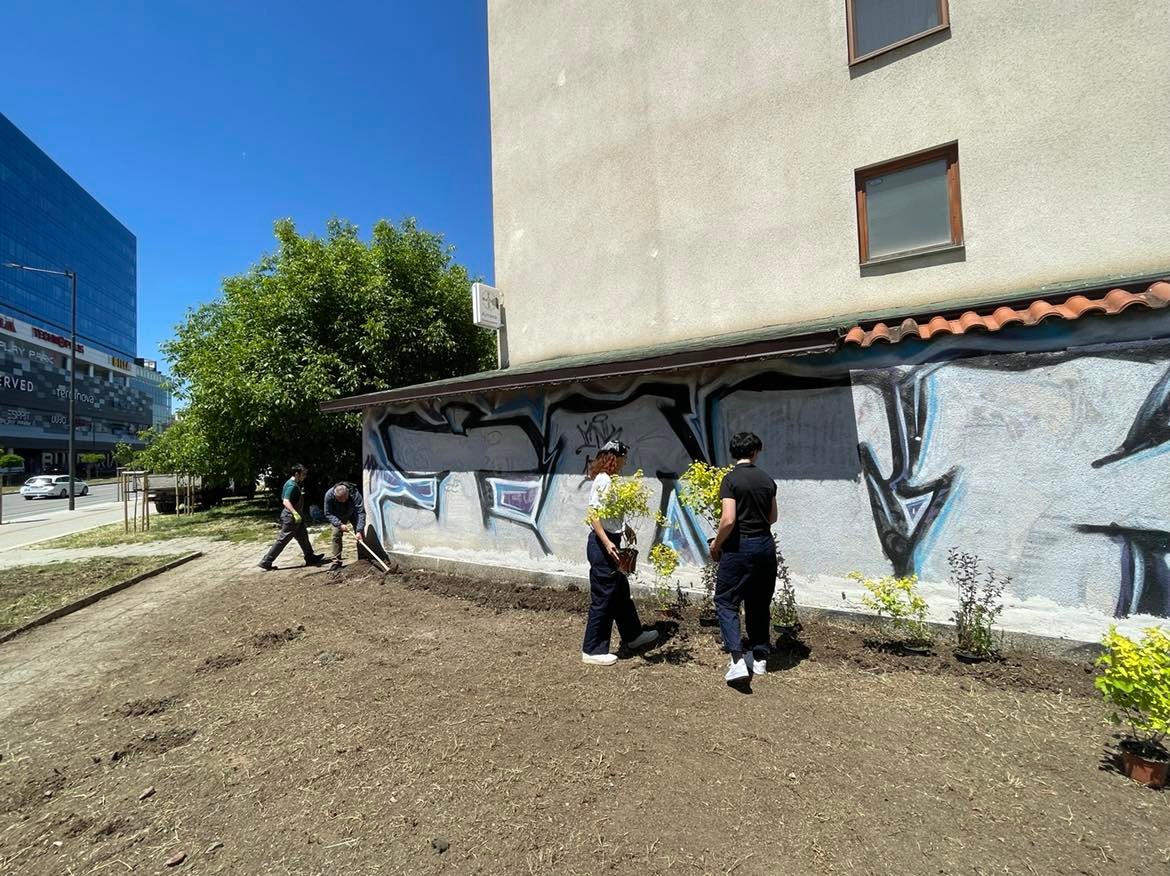 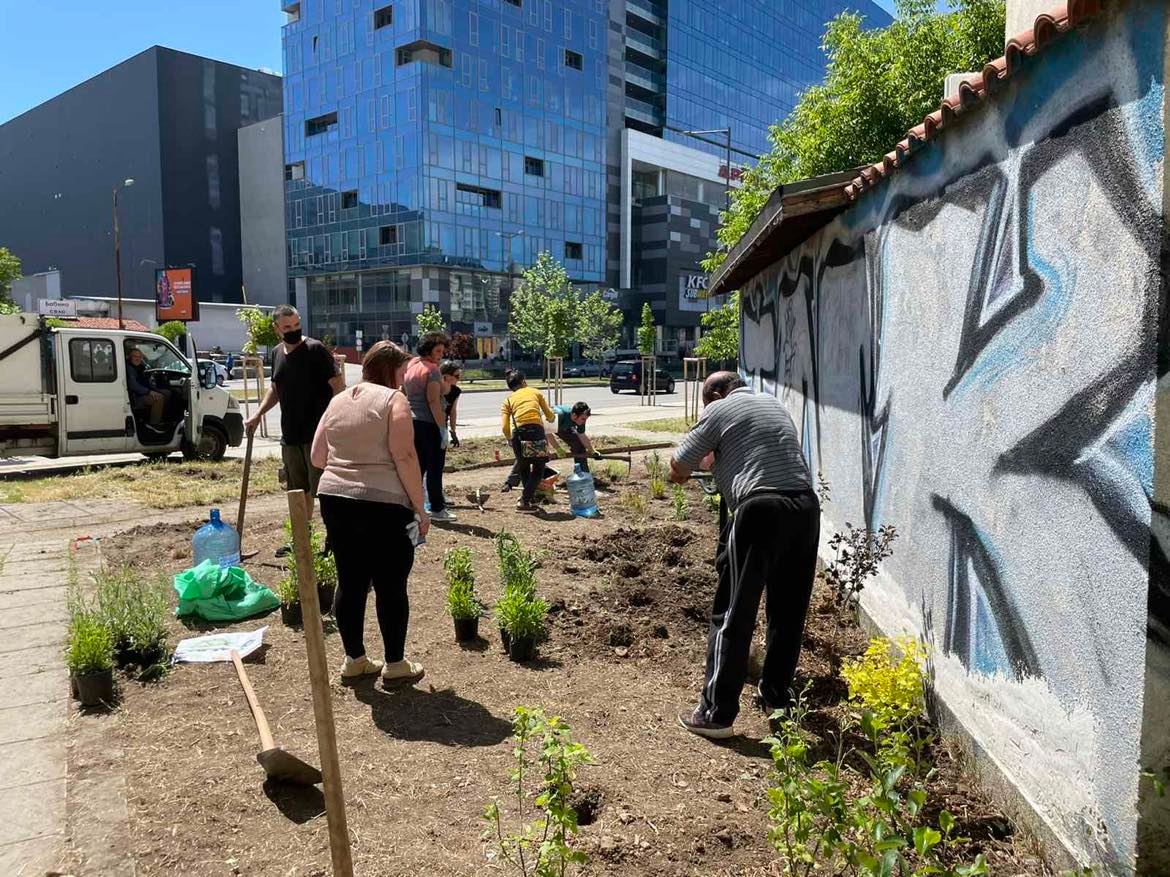 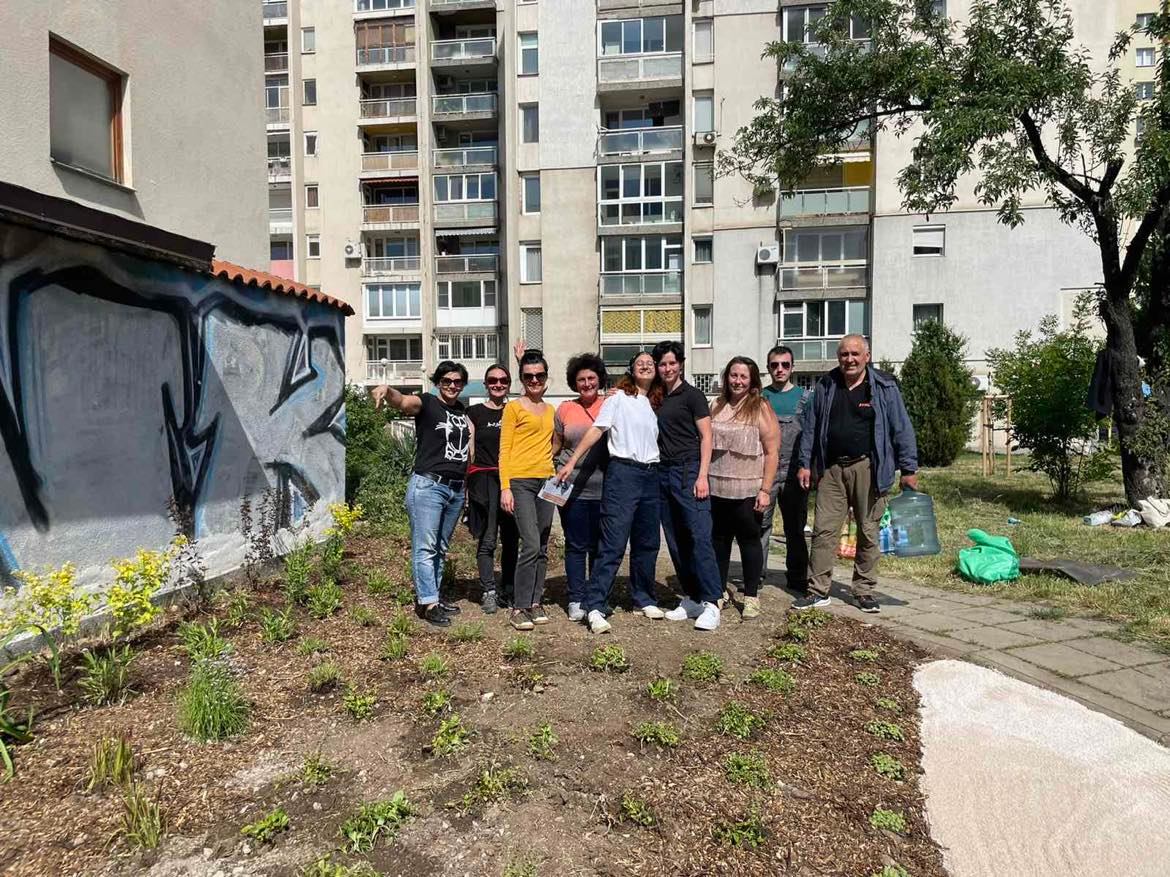 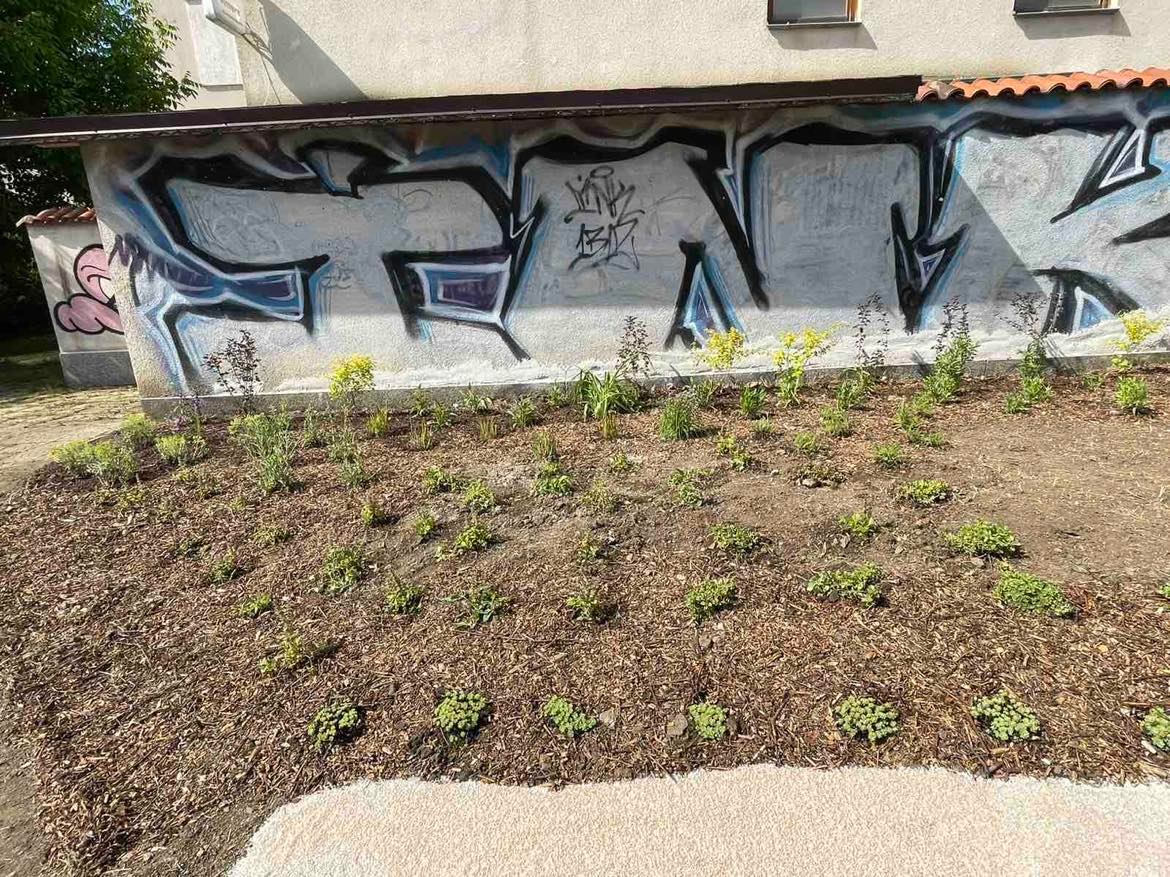 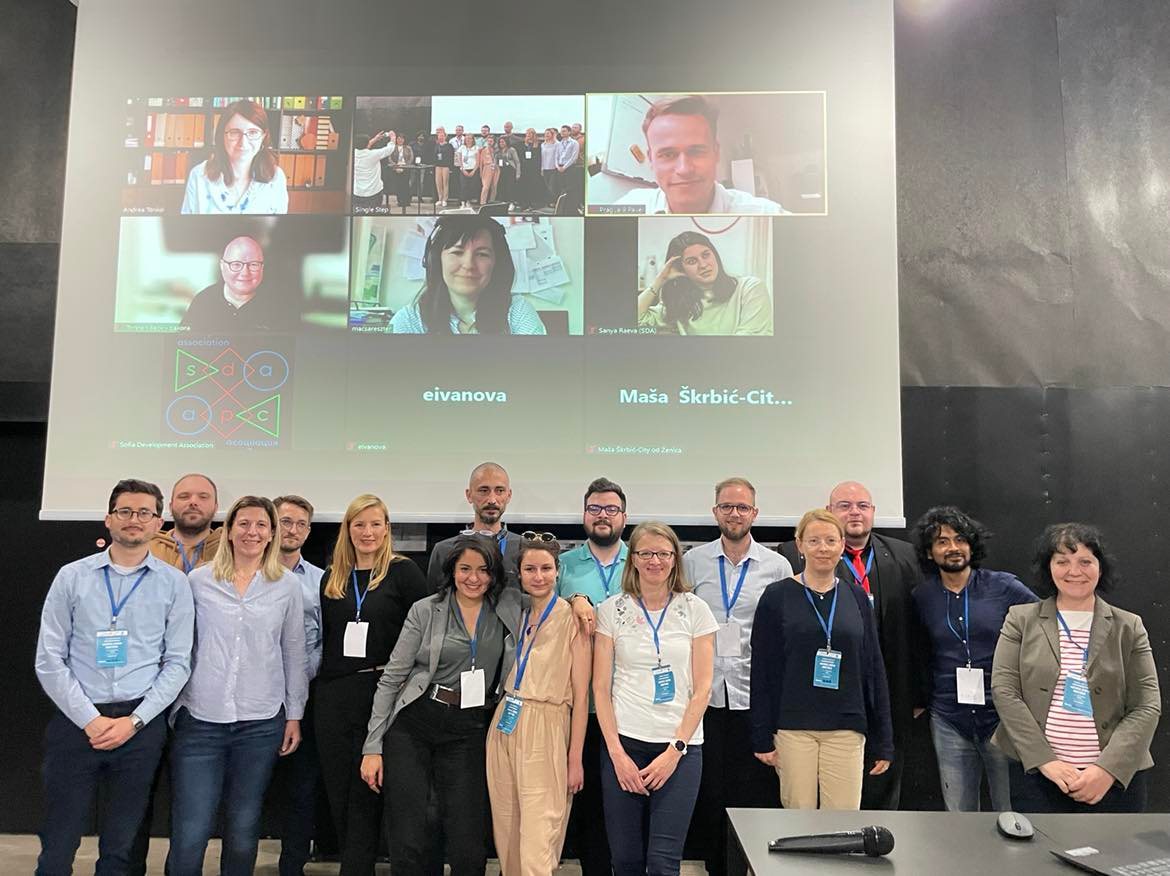 After over a year of travel restrictions, now AGORA project is up to speed with the physical meetings. Sofia Development Association and Sofia Municipality hosted the second physical meeting, the meeting of the Steering Committee and a transnational capacity building seminar in the Bulgarian capital on May 11 and 12, 2022. The partners from Chisinau, Moldova, Cluj-Napoca in Romania, Koprivnitsa in Croatia, Kranj in Slovania, Neckar-Alb Region in Germany, Prague, Czech Republic, Slavonski Brod in Croatia, Szarvas in Hungary and Zenica in Bosnia and Herzegovina convened physically and online.

The consortium meeting was filled with intense partner exchange, mutual learning about diverse co-creation processes, different cities Regeneration Agendas, their pilot renovation projects and initiatives to activate the stakeholders. More than a meeting, the partners visited Toplocentrala – the Sofia pilot project, met with the team there and saw the river that needs to be integrated into the usable area.

The transnational capacity building workshop was also joined by representatives of other Bulgarian municipalities, stakeholders and other INTERREG Danube projects in the area of culture and urban regeneration. Participants worked together on the pillars of the AGORA capacity building toolkit that will be developed later in the project, varying from financial and business models to stakeholder engagement, from fair spatial planning to sustainability.

AGORA project is implemented under the INTERREG Danube program and is co-financed by the European Union funds (ERDF, IPA II). 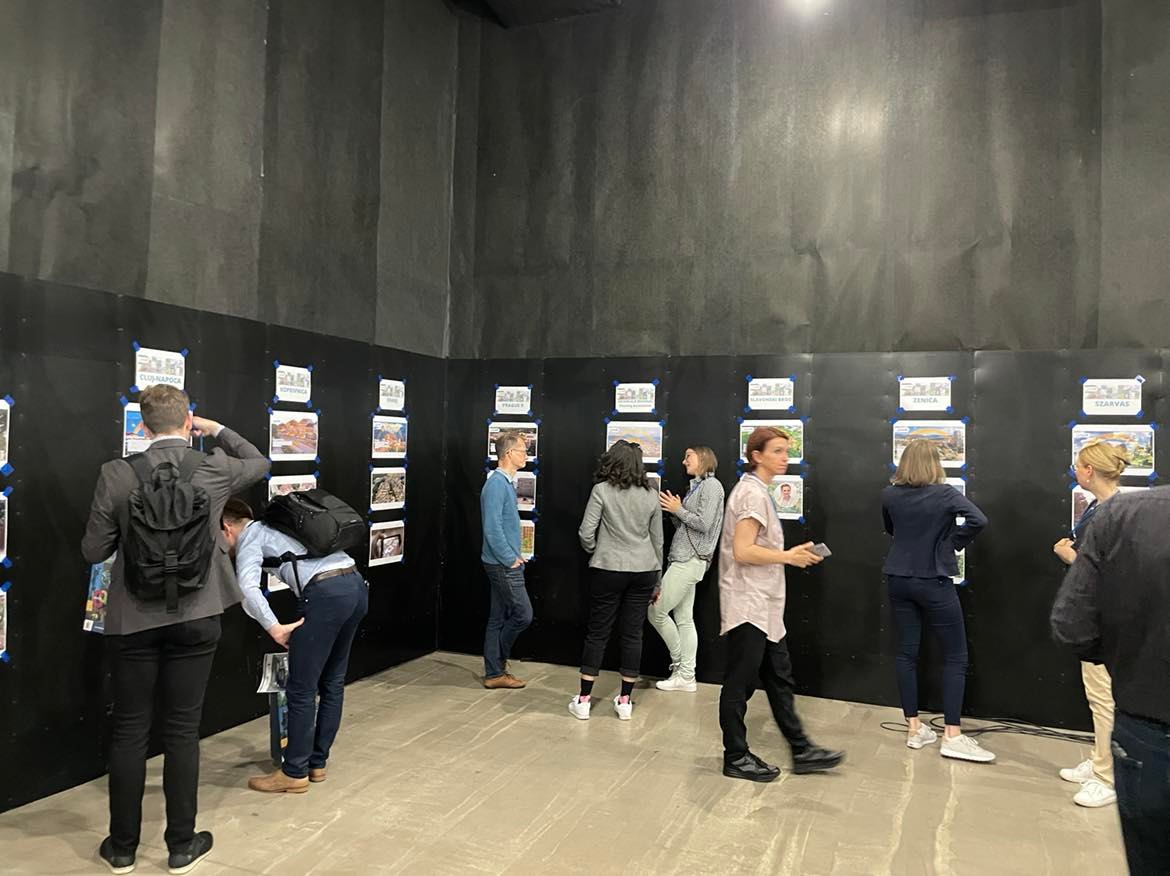 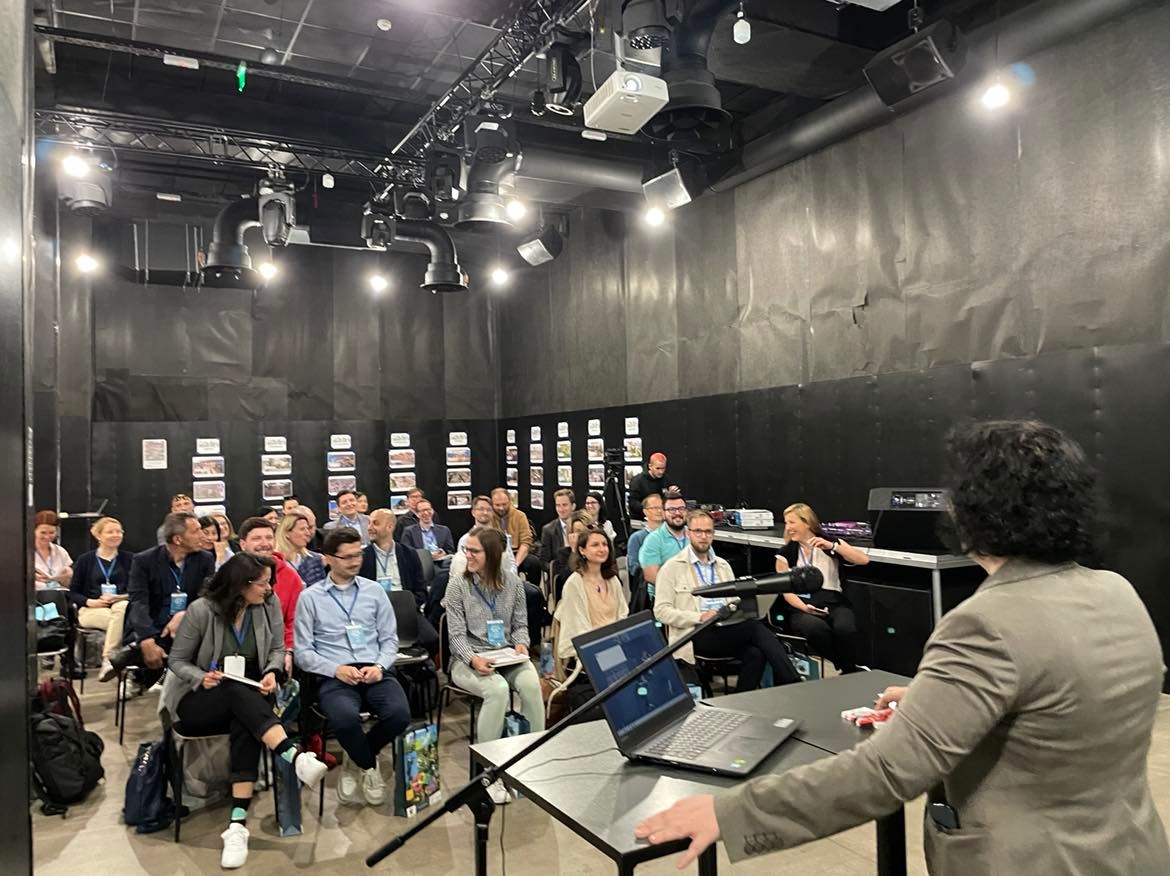 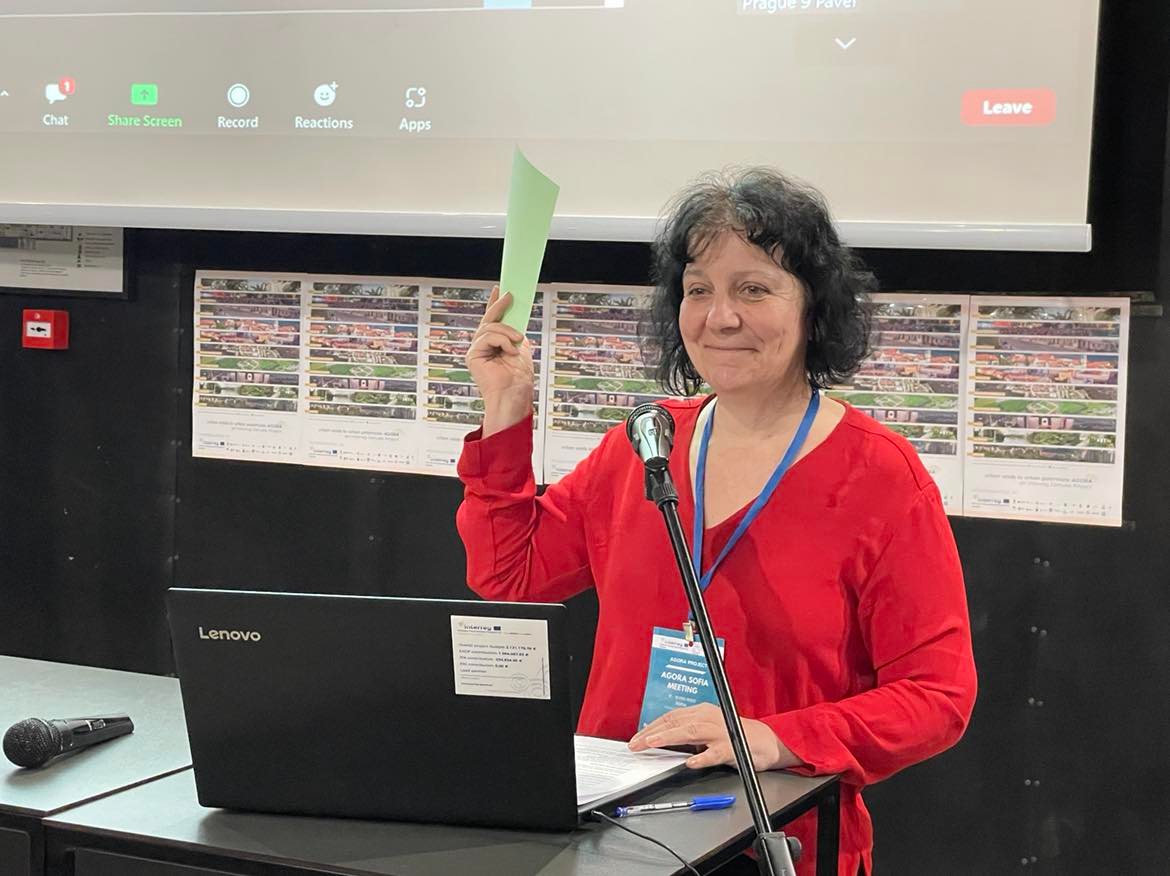 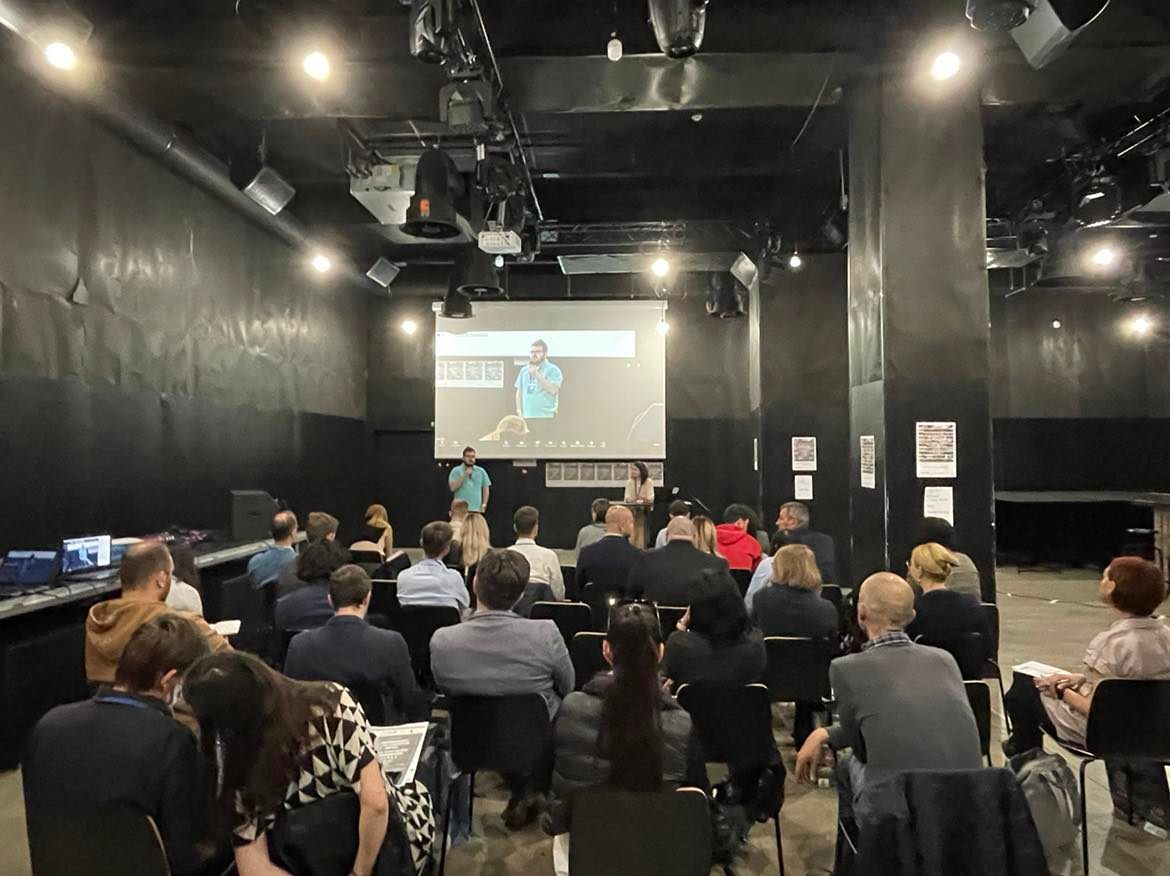 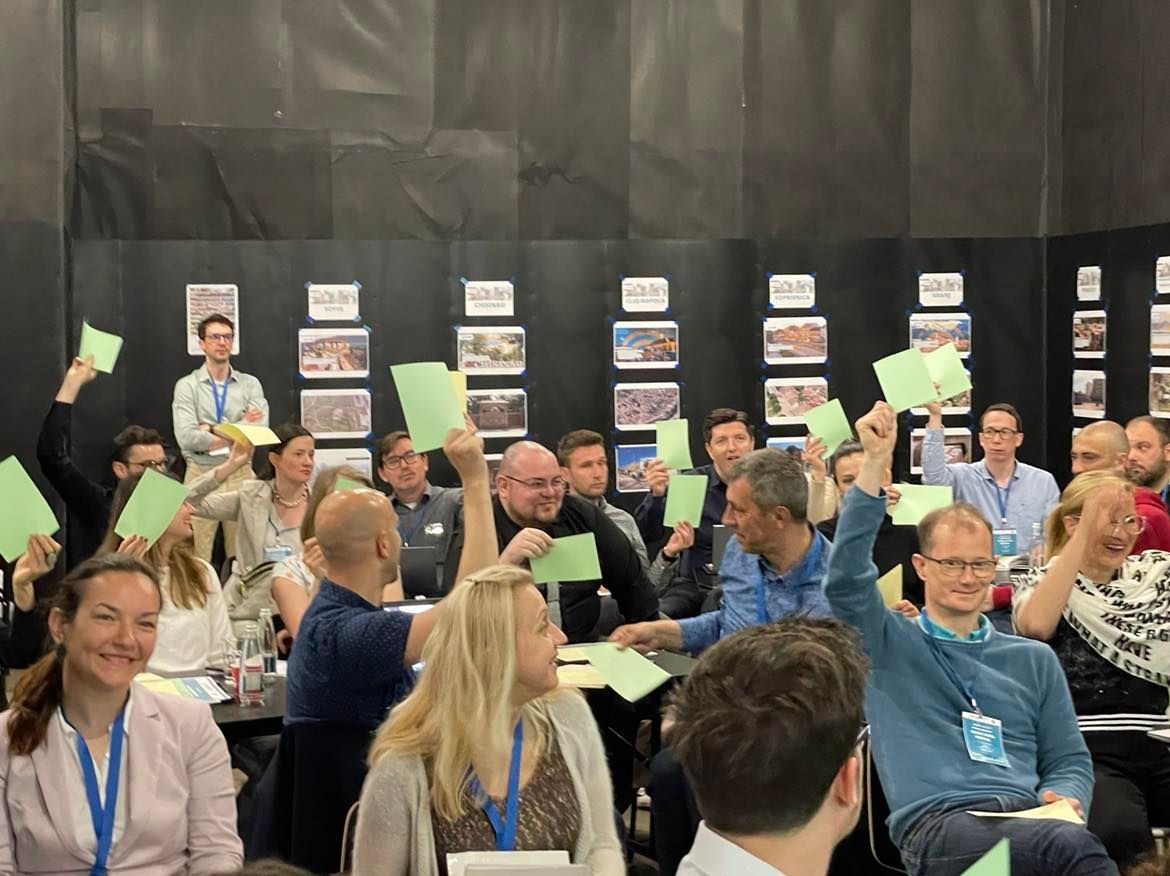 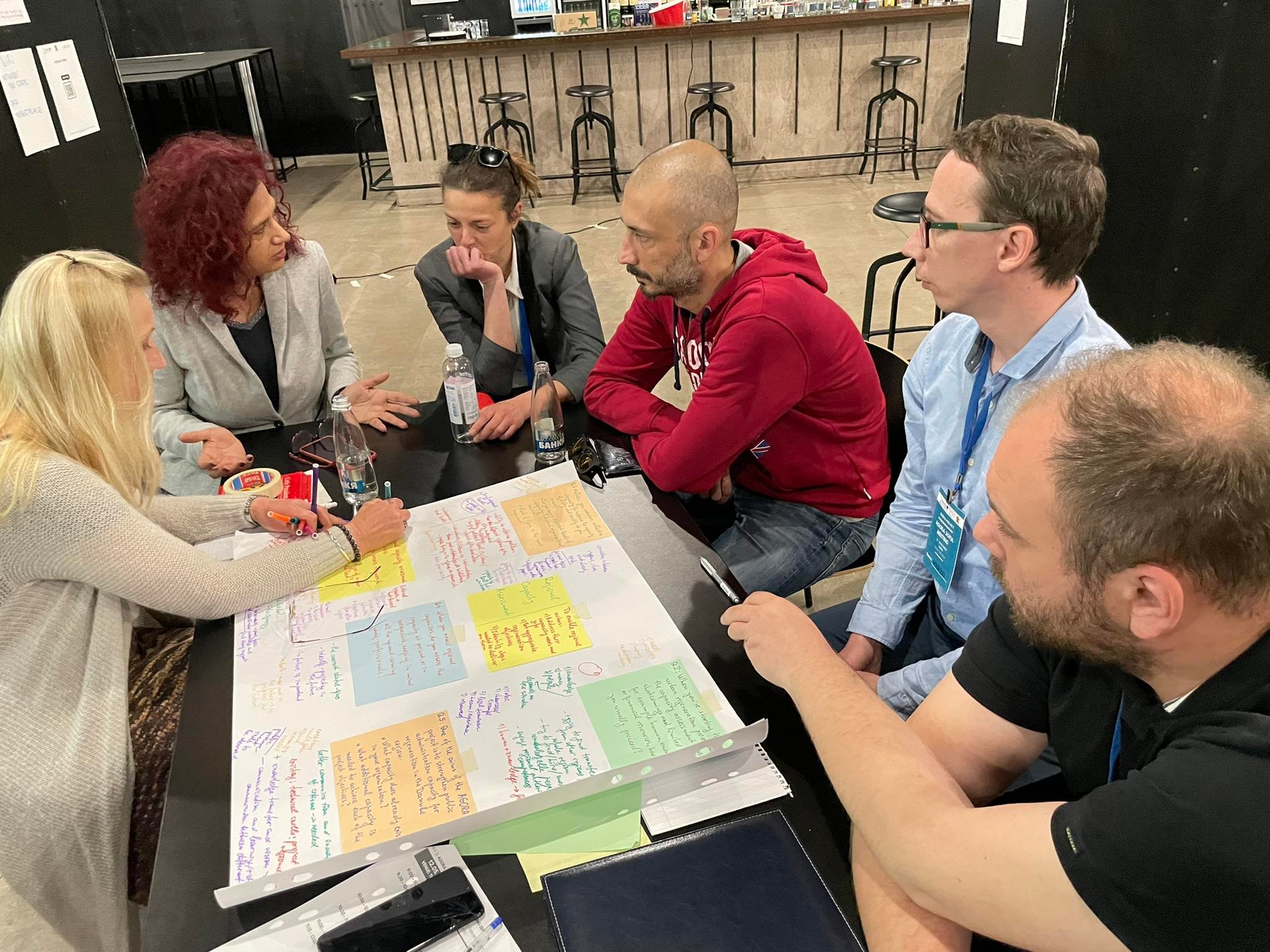 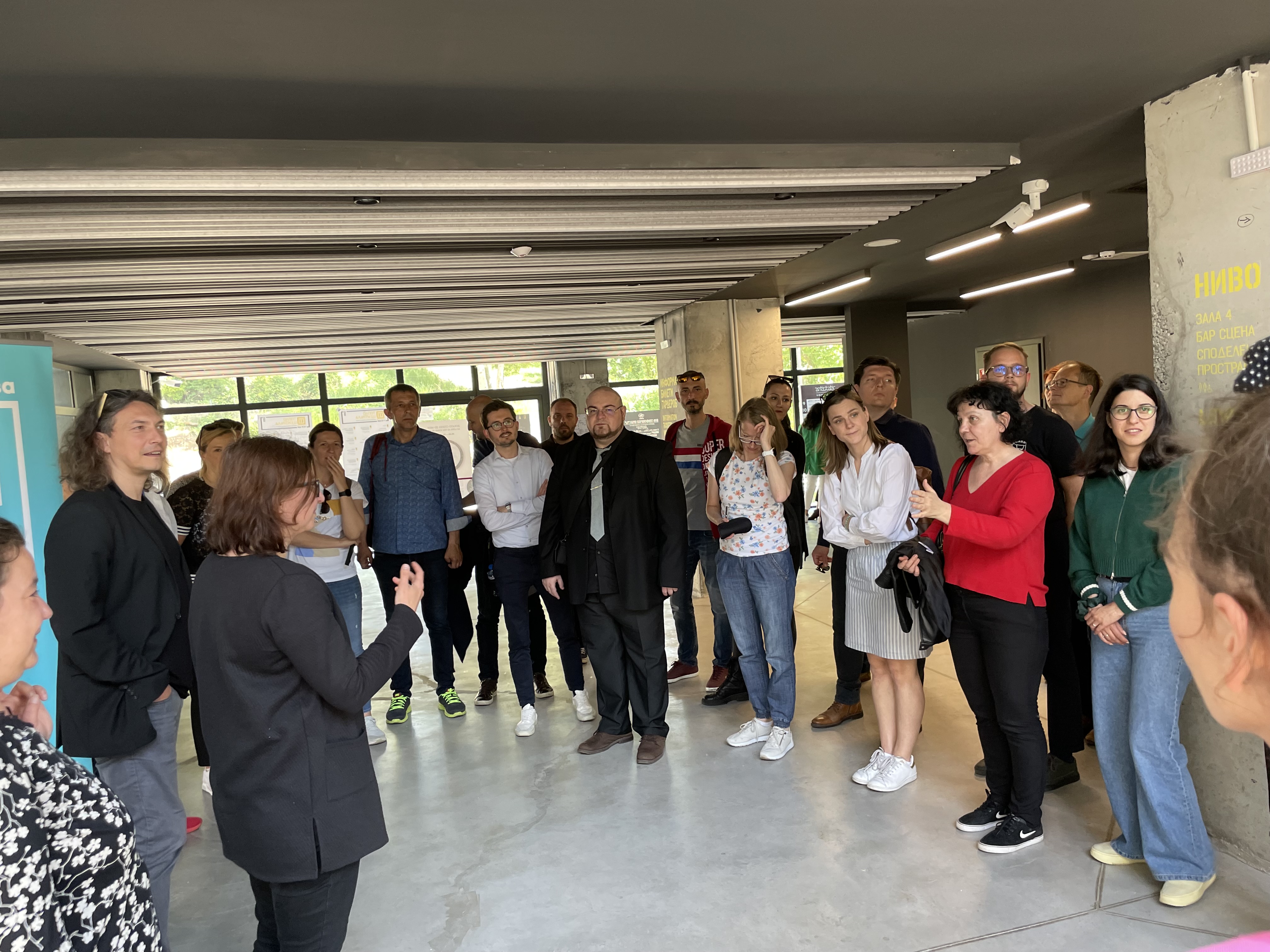 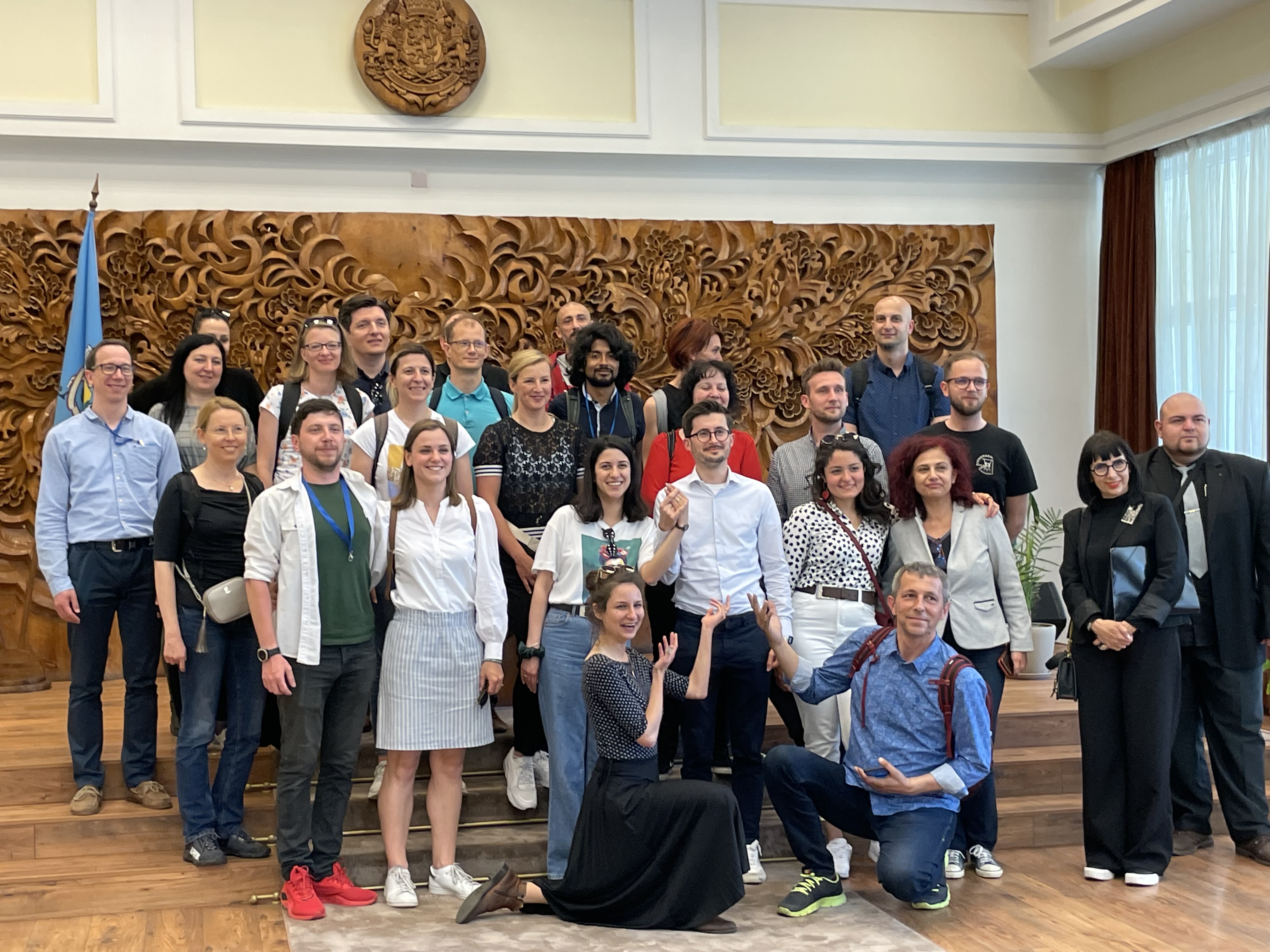 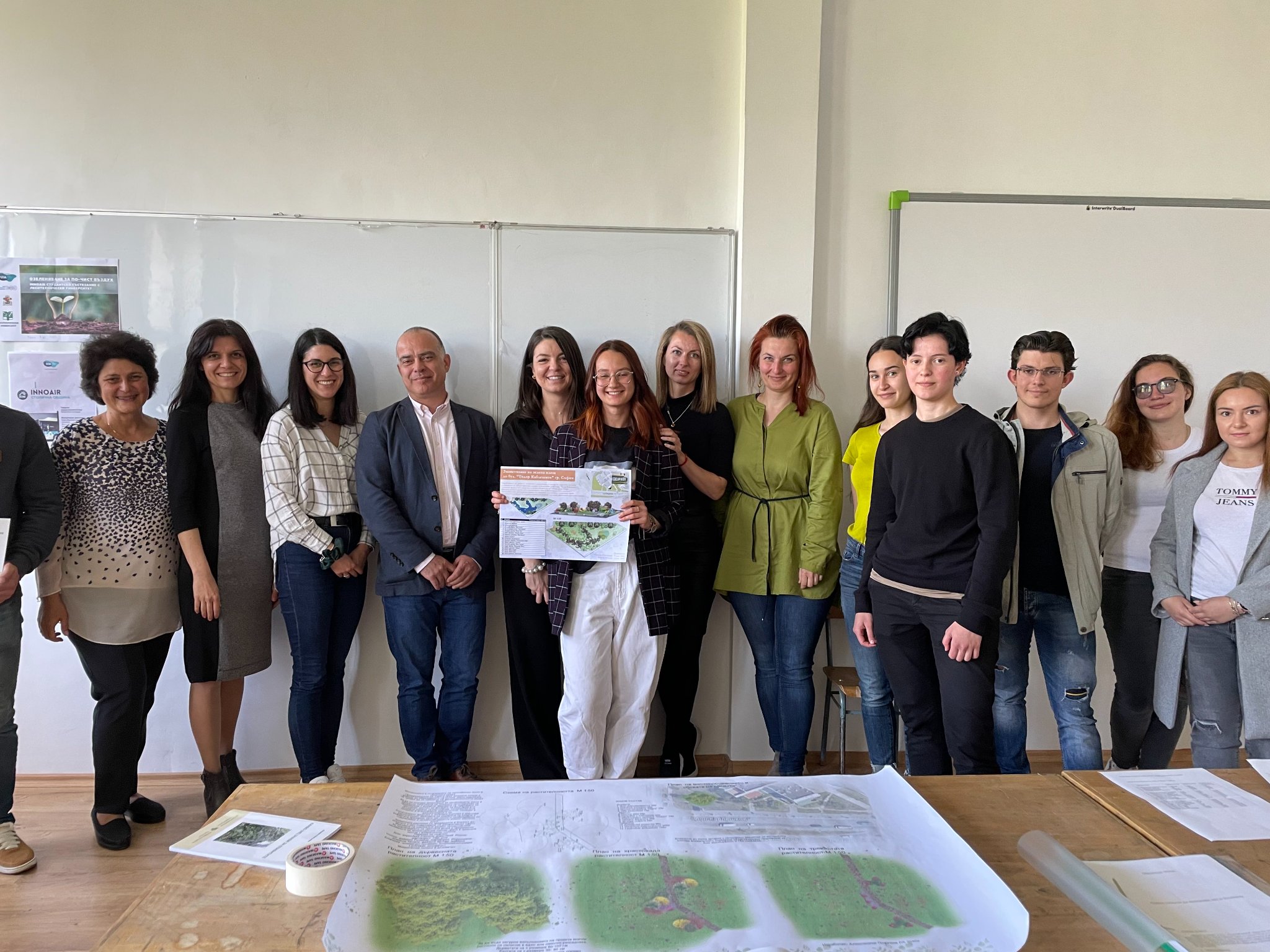 The students from University of Forestry answered the question "How can proper landscaping improve the urban environment and air quality?"

The project that took the first award was presented with the idea of ​​highlighting a good example. Residents of the selected area (around Todor Kableshkov Bldv.) have already created a colorful space that effectively purifies the air and contributes to both the natural ecosystem and the beautiful urban environment. To show that they embrace their initiative, second-year students Simona Novoselska and Merlin Nezhdet have chosen for their project the place next to their flower bed, which will now double its size. All the plants that the students have selected are very easy to maintain and extremely effective. We hope that the good example will be passed on!

The second award took a project that includes flowers as well as shrubs and trees. It was developed by Alexander Georgiev and consists of plants that are drought-tolerant, bloom from early spring to late autumn and have a long-lasting decorative effect.

Third award went to the project, which looked into the Chinese philosophy of "Yin and Yang". With its geometric shape, the author sent a clear message about the need for ecological balance. The project was created and presented by Elis Basrieva.

The decision on which of the projects to receive funding was made by a competent jury represented by experts from Sofia Municipality and the University of Forestry: Hristo Valchanov, Deputy Mayor of Triaditsa District; Iva Valkova, Ch. expert, Transport Activity Department; arch. Katerina Kanevcheva, Ch. expert, Green Systems Directorate, and Assoc. Prof. Svetlana Anisimova, lecturer in Decorative Dendrology and Floriculture, LTU.

The creativity of the students extends widely, so the decision was difficult. Slavi Dichev's project includes vegetation that serves as a sound insulator. Penka Rudeva's proposal was in the form of the world-renowned Bulgarian embroidery, and Maria Todorova recreated the house of Todor Alexandrov, whose name is the boulevard on which the winning project will be implemented.

In the gallery below you can get acquainted with some of the projects and participants. 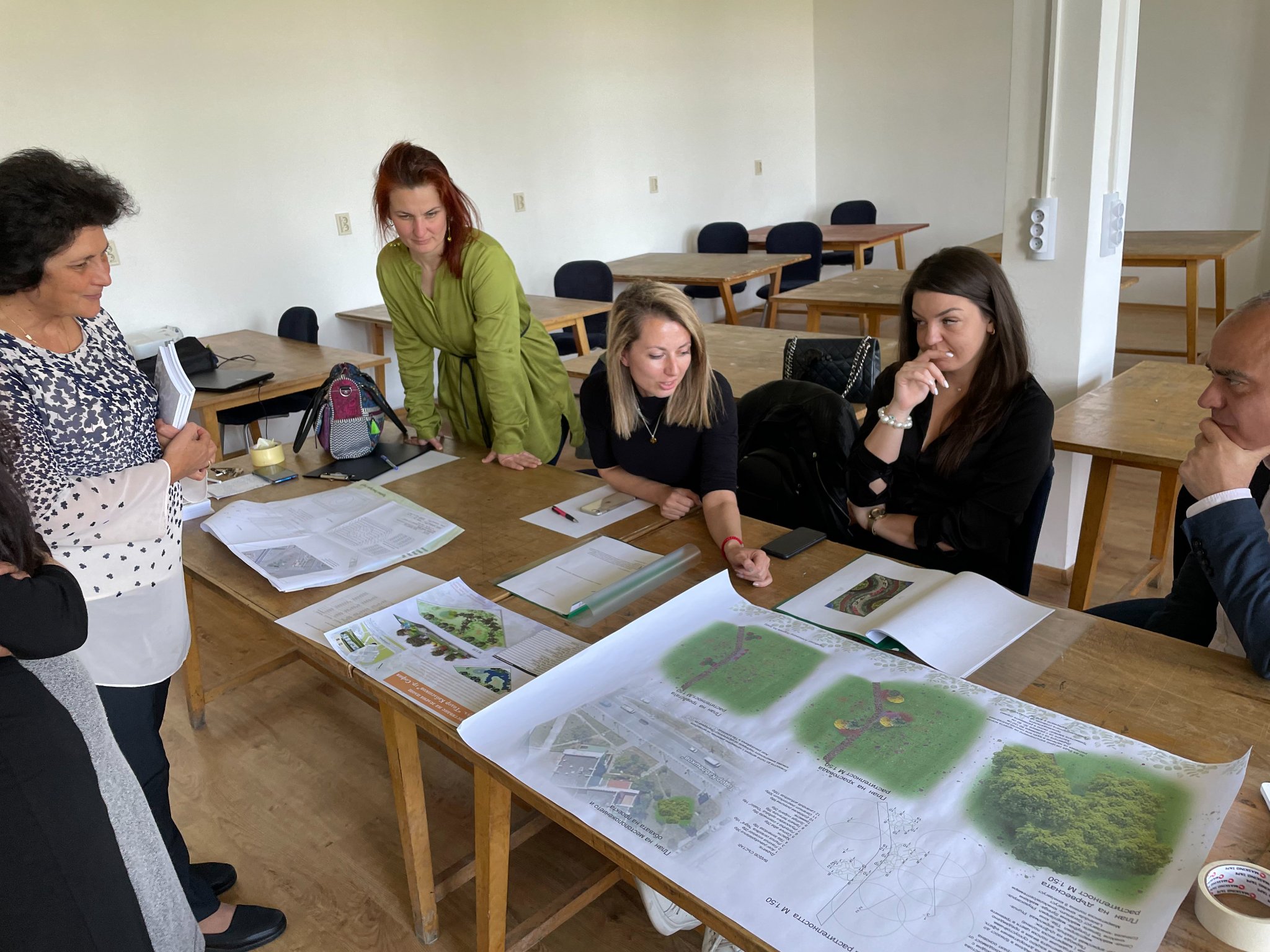 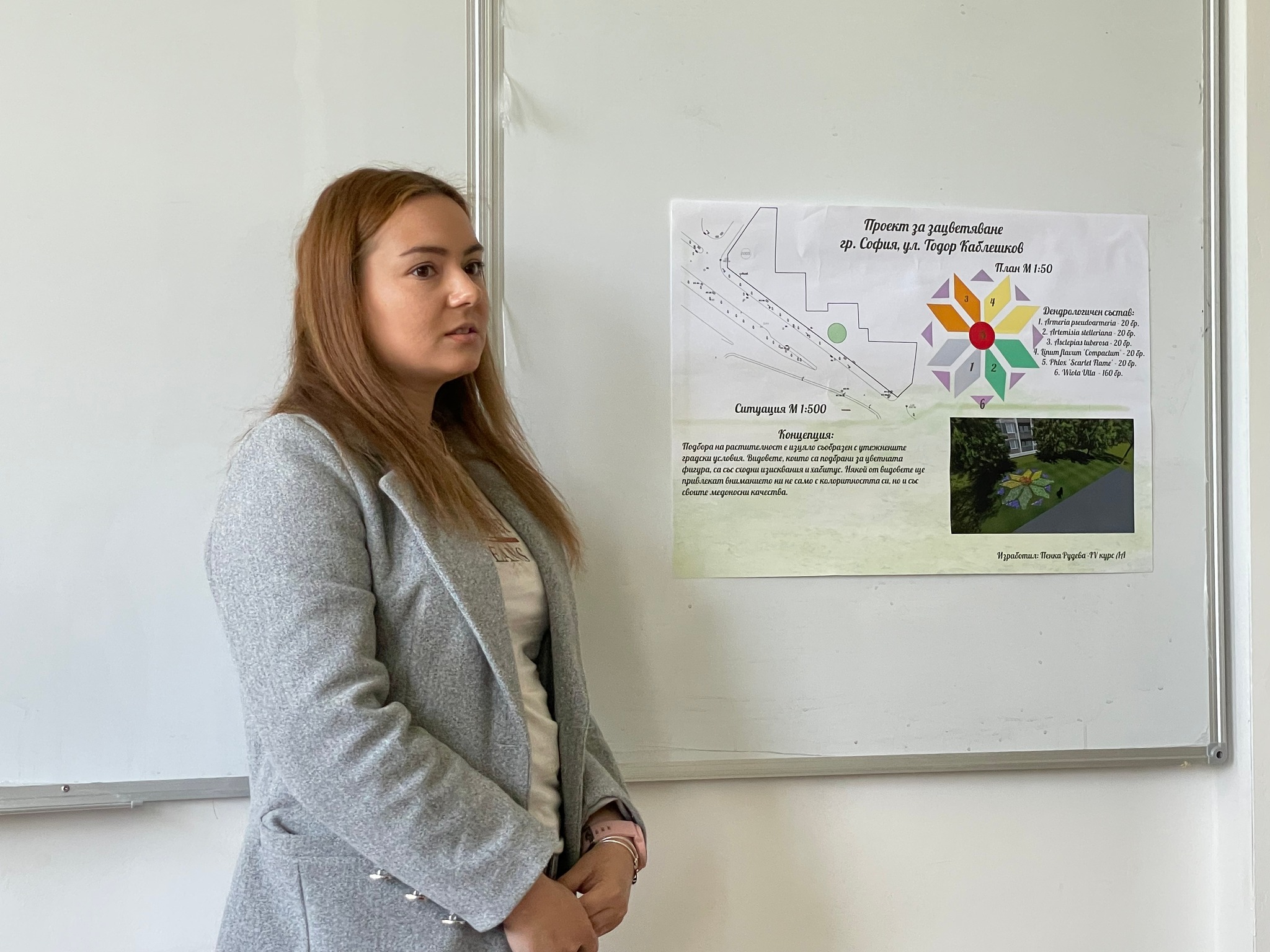 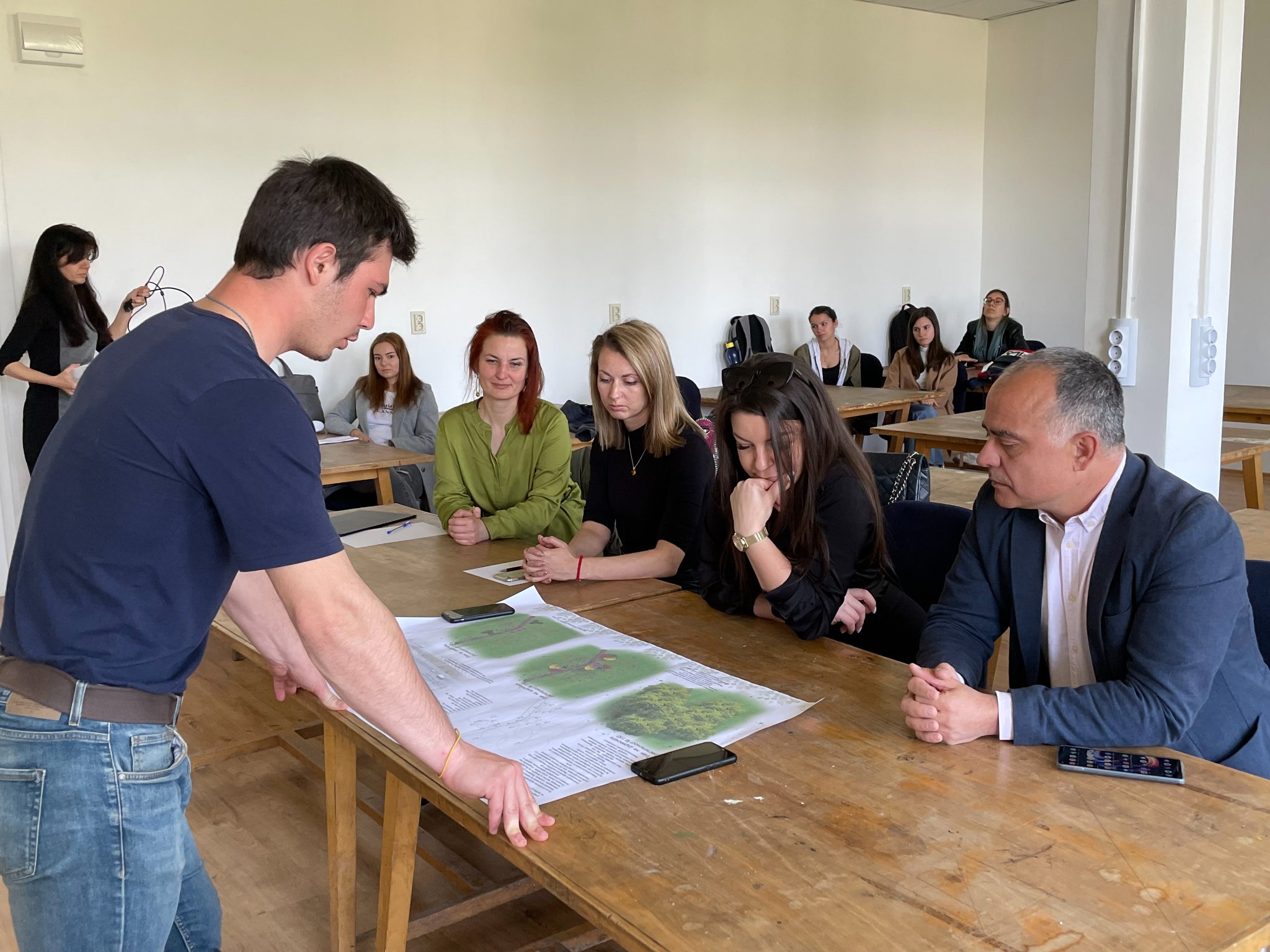 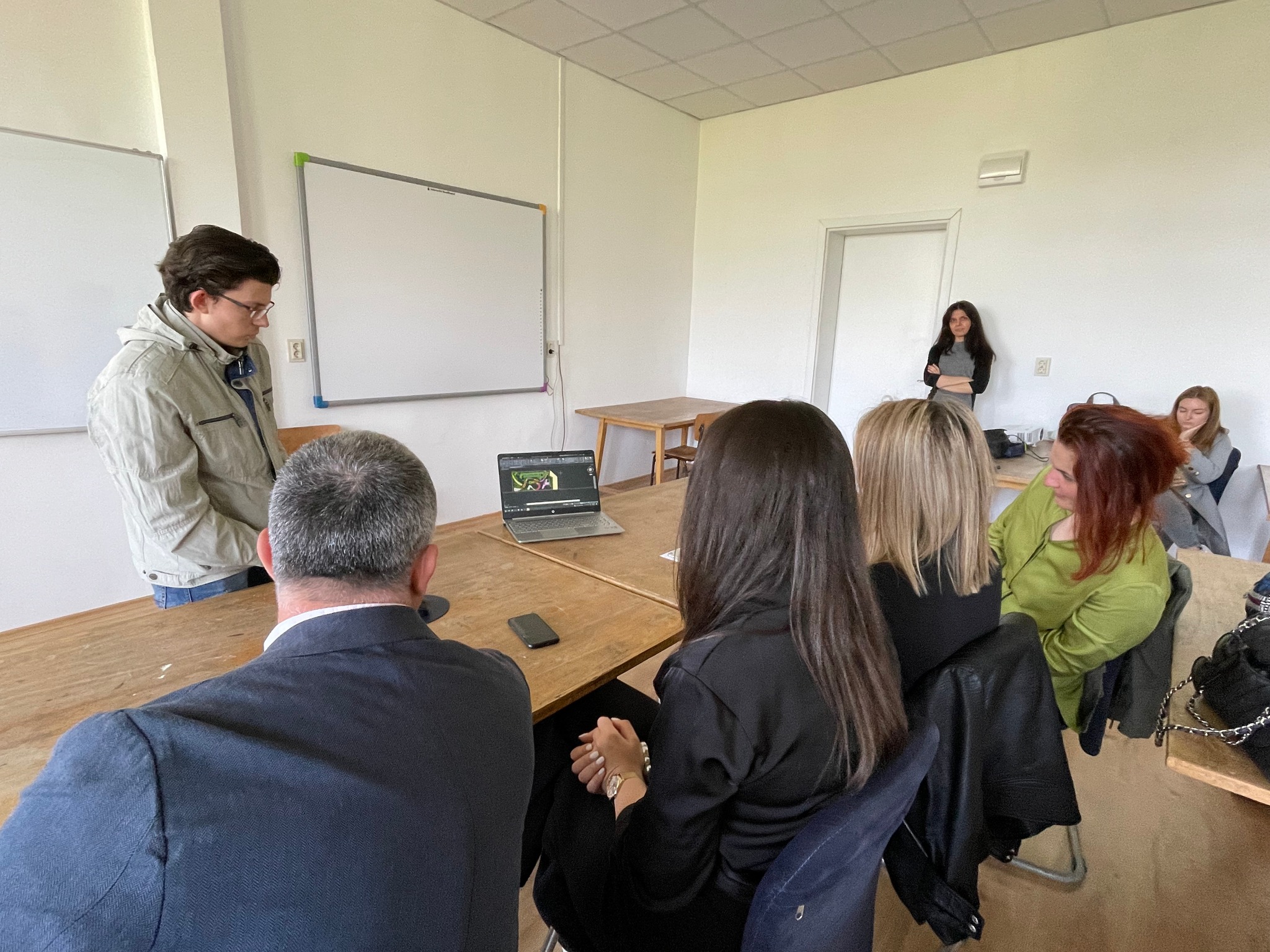 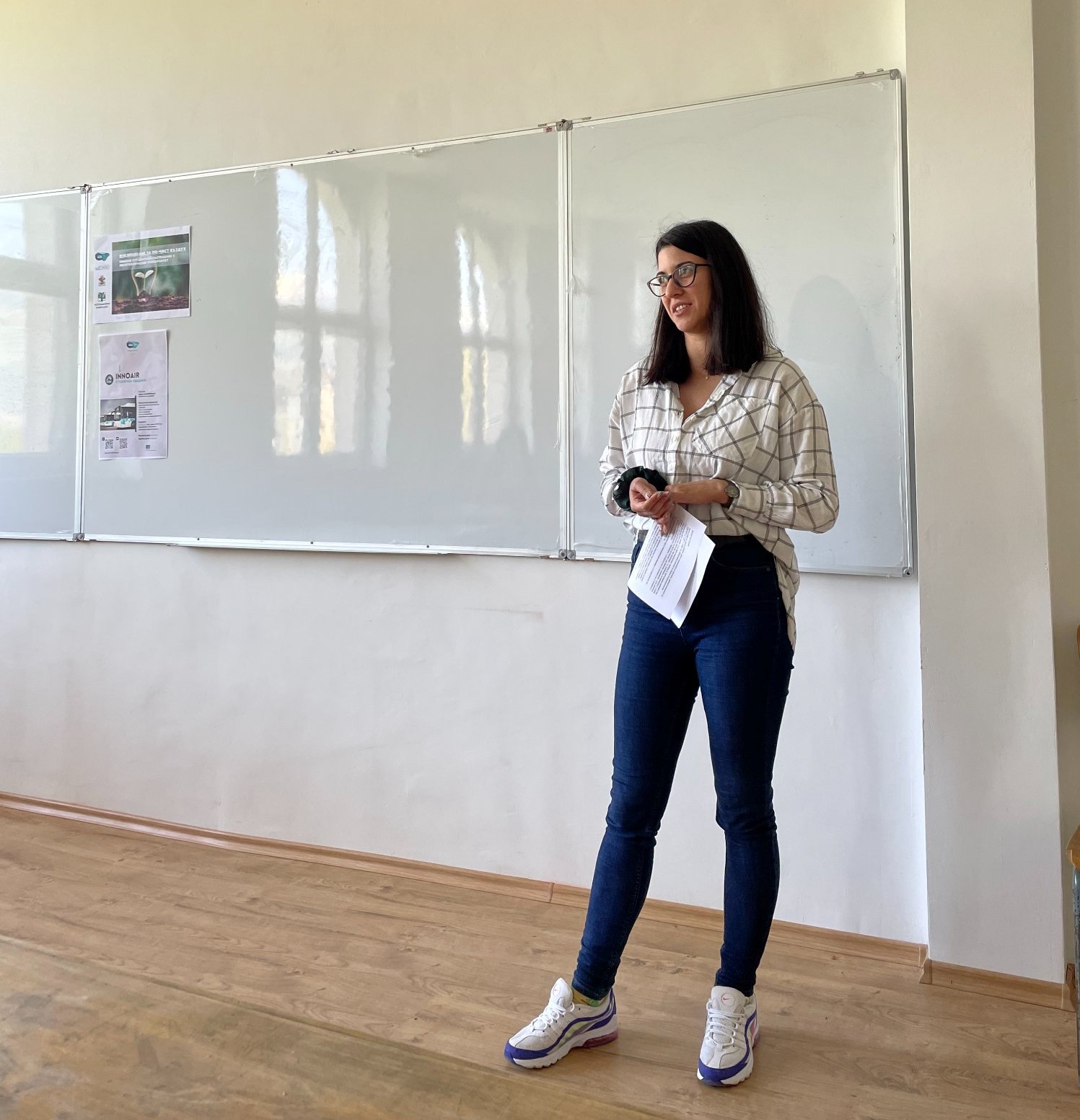 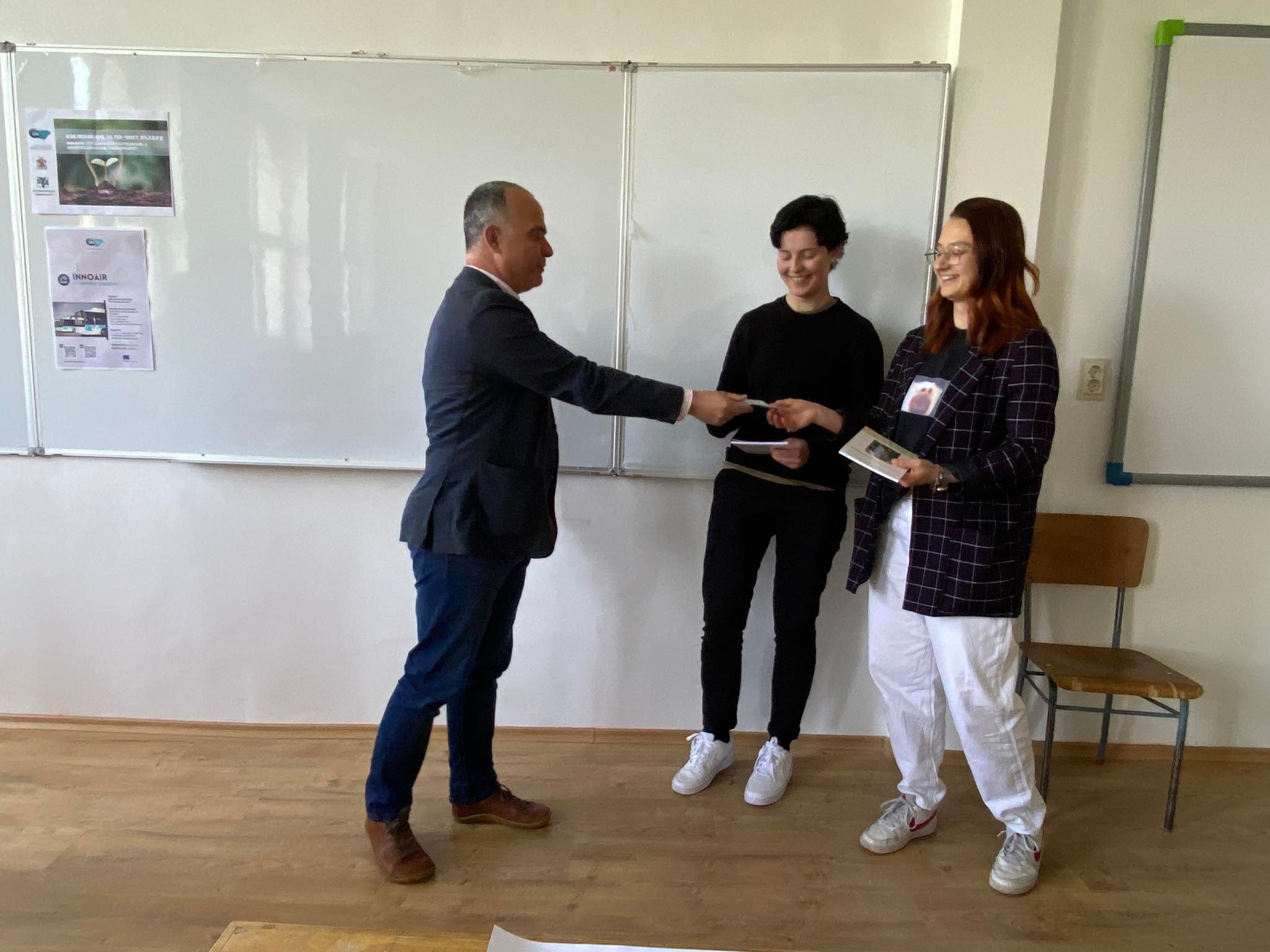 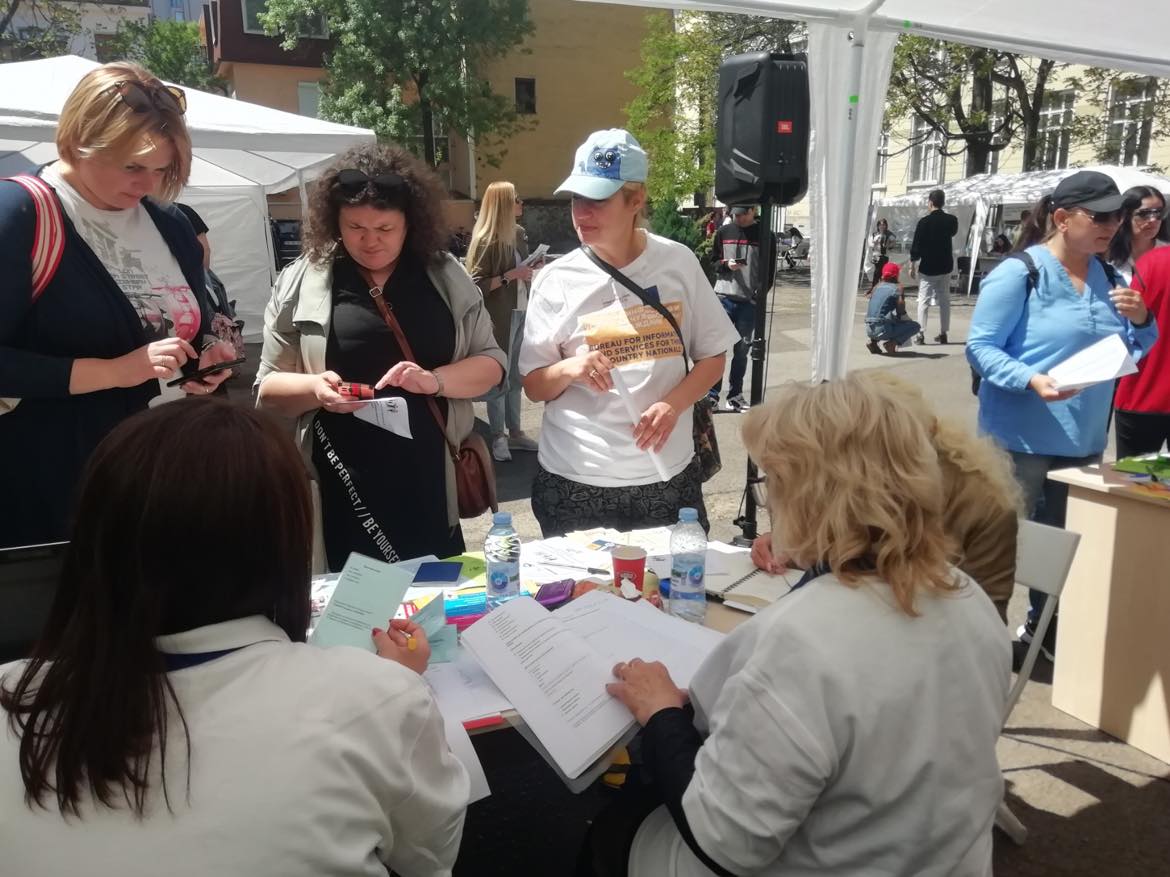 On May 11, 2022 the Labor Office Directorate of Vazrazhdane District organized a Job Search Fair. Employers from various economic sectors took part in the event. The event was an opportunity for Ukrainian citizen to meet with employers, to learn about employment procedures in Bulgaria, and to meet specialists who can guide them through the job search process.

The fair was organized by the national Employment Agency. SDA and The Bureau for Information and Services for Third-Country Nationals supported the event by providing interpretation from Bulgarian into Ukrainian and Russian.

SDA will continue to support the process of labor market integration of migrants and refugees in Sofia Municipality. For further information you can contact us or the Bureau for Information and Services for Third-Country Nationals at This email address is being protected from spambots. You need JavaScript enabled to view it.. Follow SDA’s website to learn more about similar initiatives.

The Bureau is established in the framework of #CONNECTION project and funded by a European grant. 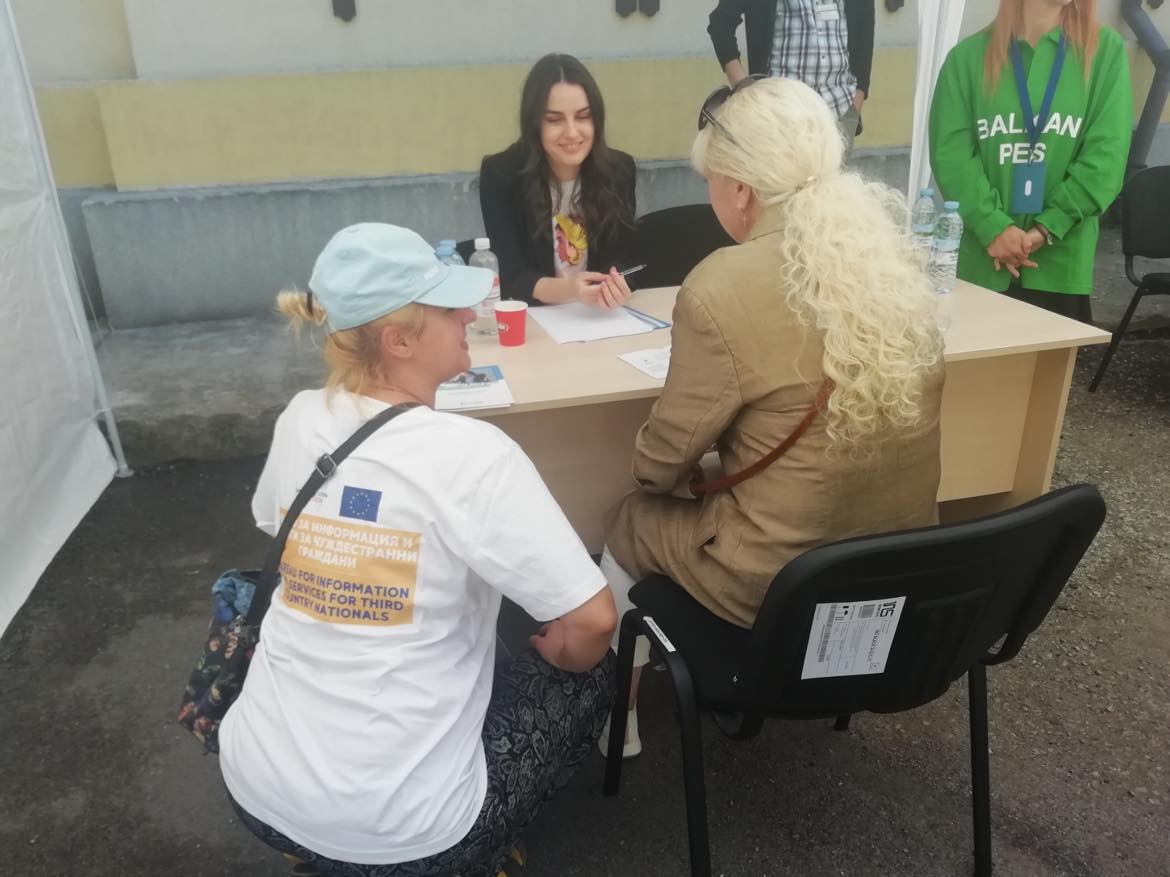 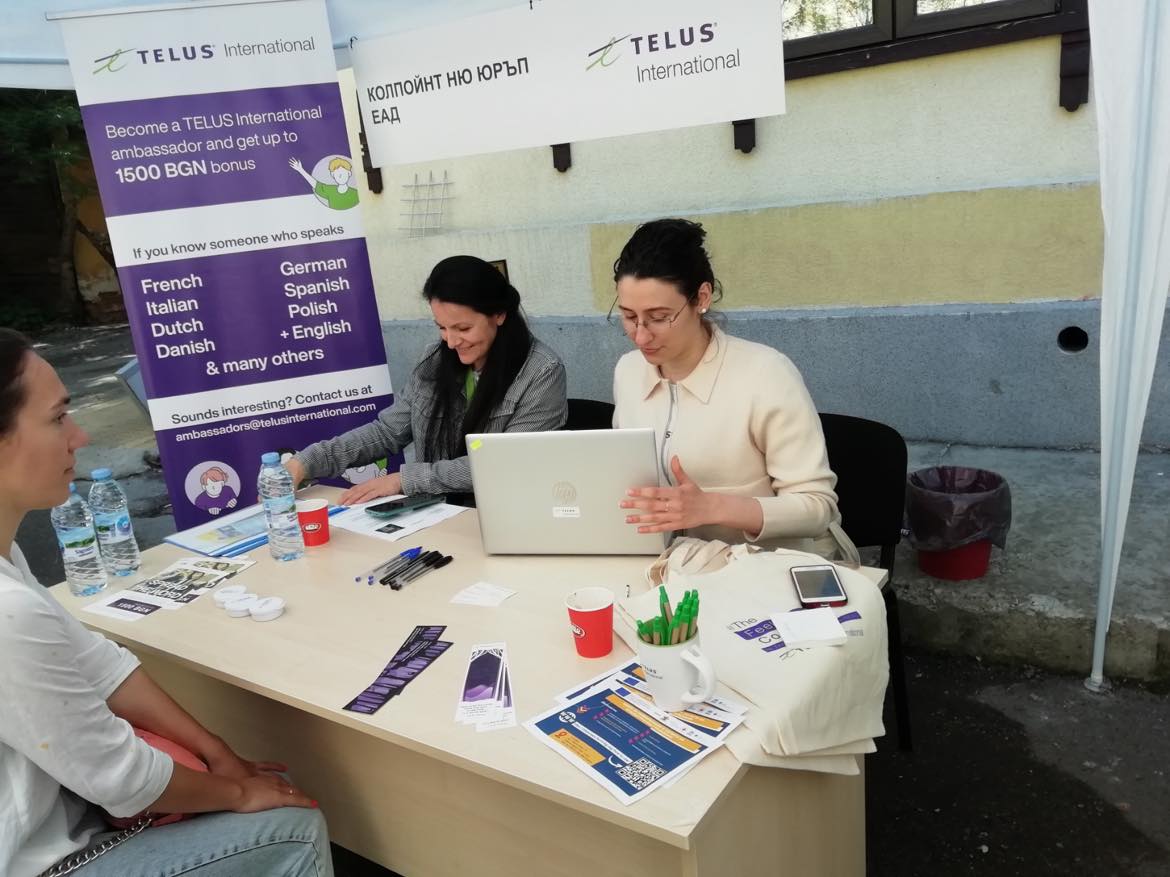 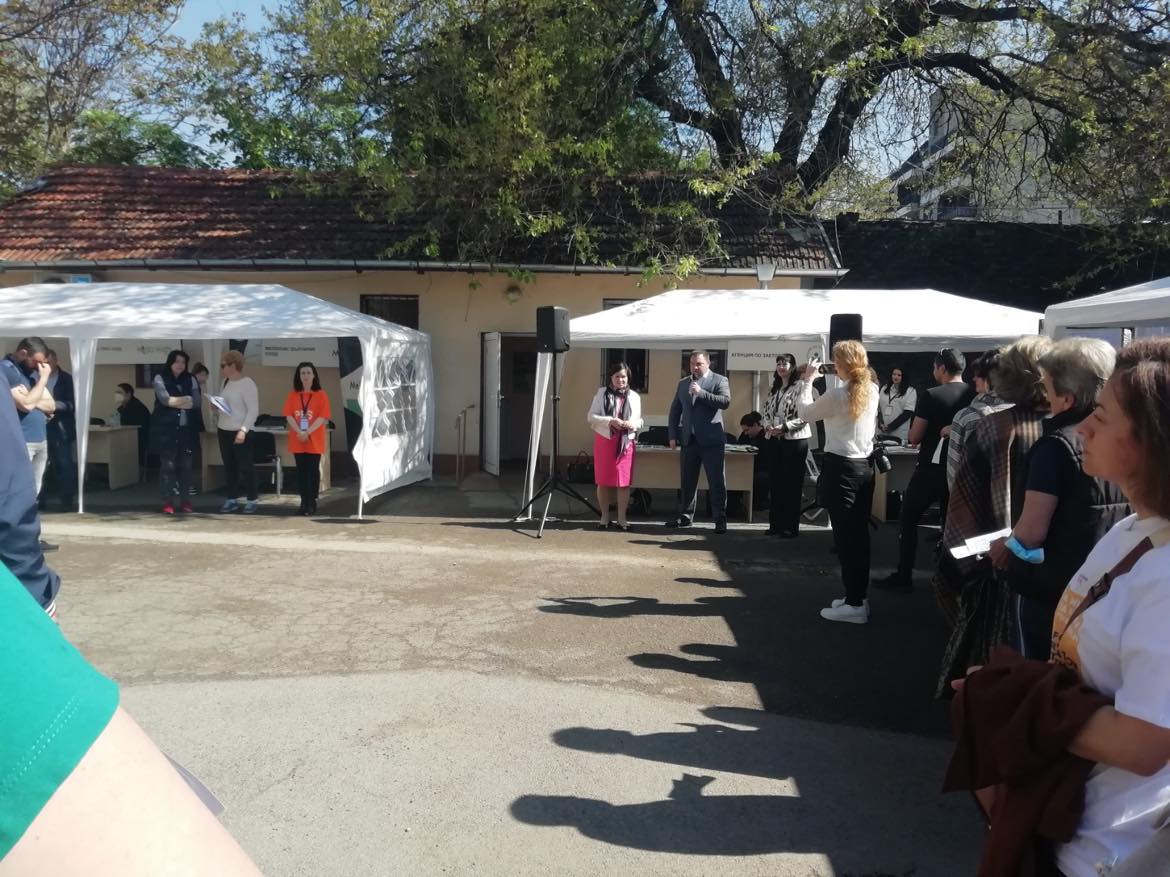 LEARN MORE ABOUT INNOAIR – INFODAY WILL BE HELD ON MAY 17 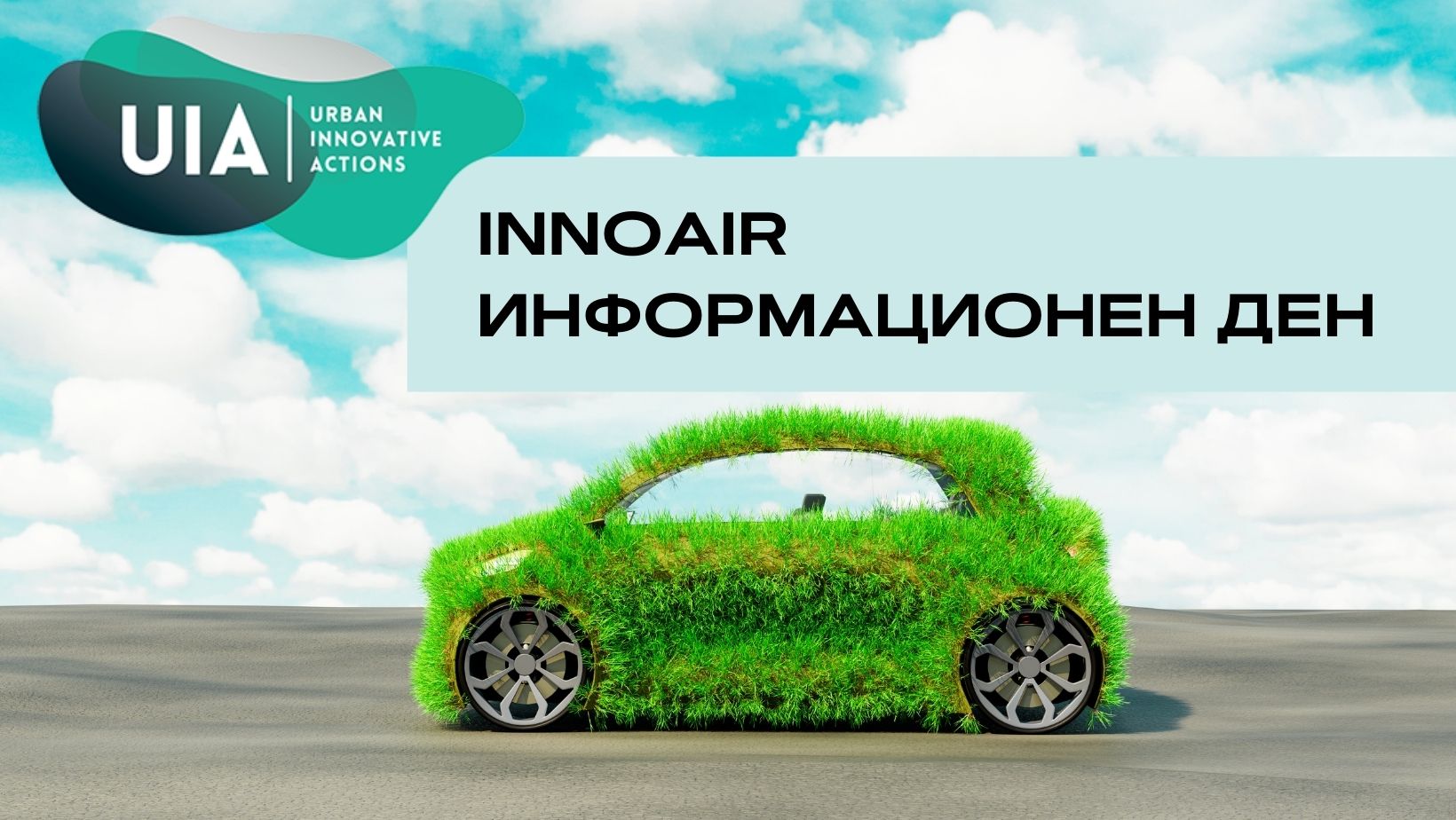 INNOAIR aims to improve the air quality in the capital through innovative, technological solutions as well as through the involvement of the public in the cause.

If you want to learn more about the activities through which the INNOAIR project partners achieve this goal, you can join the Information Day of the project, which will be held on May 17 (Tuesday) from 10:00 on-site at SofiaLab (1 Serdika Str., 3rd floor) and online at ZOOM (https://us06web.zoom.us/j/86974603820?pwd=eDNxeFQrUm9BZ09OTldjSVo2NG92QT09). You can watch the event live on Facebook - https://fb.me/e/1v5ErPmED.

During the event, each of the partners (Sofia Municipality, Sofia University, Plovdiv University, Sofia Development Association, Sofia Urban Mobility Centre, National Association of Municipalities in Republic of Bulgaria, Modeshift and the National Institute of Meteorology and Hydrology) will present their previous and upcoming activities - studies, scenarios, technical solutions and services for citizens.

The event is public and open to anyone interested in the achievements and future tasks of the project. We invite you to take part and ask your questions! 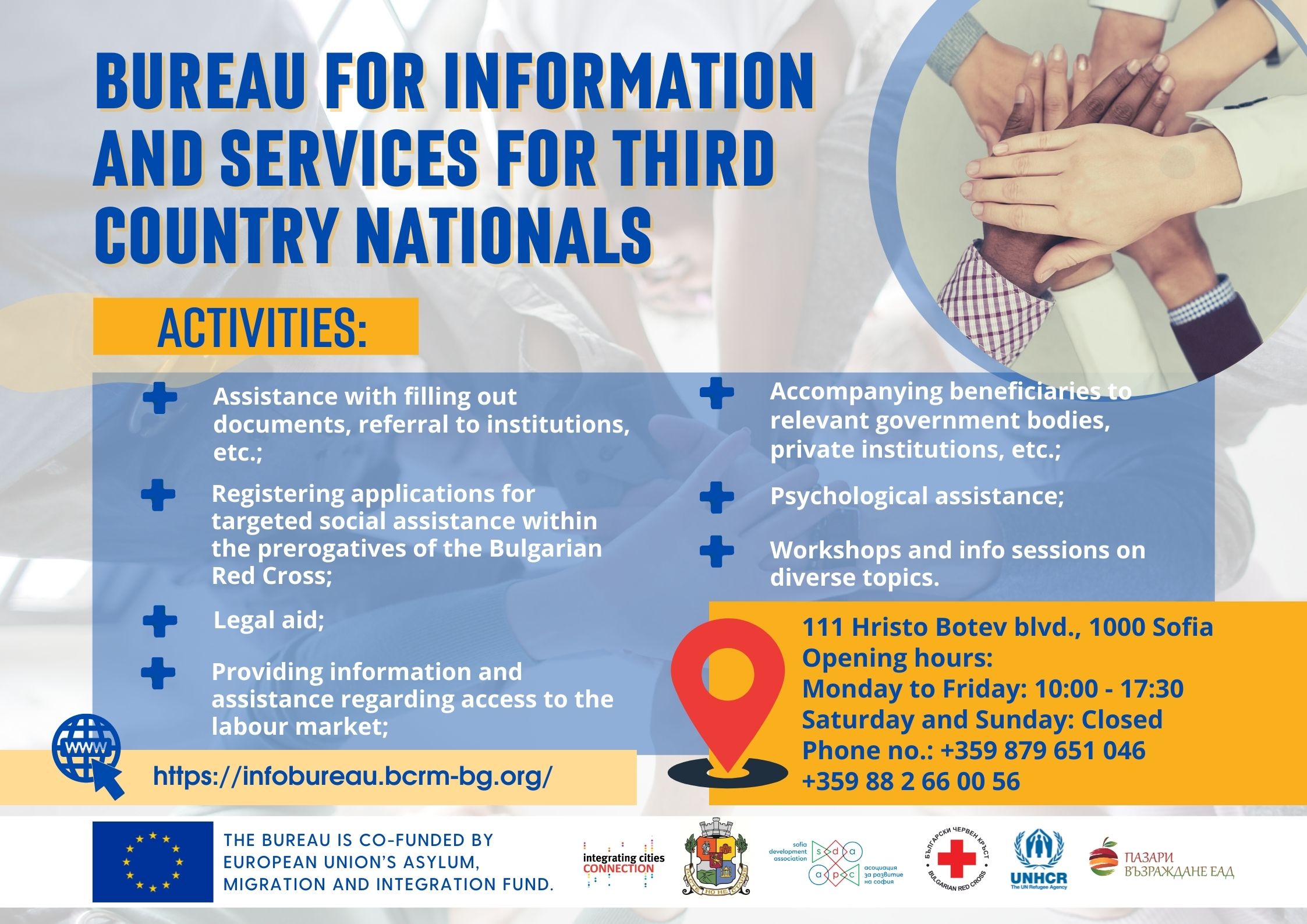 The Bureau for Information and Services for third country nationals in Sofia presents to your attention the Program with activities for the month of May. The desk is located at 111 Hristo Botev Street and is open from 10:00 to 17:30. The program and the services provided are in several languages.

The program and the services provided by the Bureau are in several languages:

The bureau is designed to be a vital entry point for foreigners and migrants looking to access accurate information on specialized services and referrals to service providers in heath, legal and protection matters.

The bureau is the result of the combined efforts, resources and expertise of the Sofia Municipality, the Sofia Development Association, the Bulgarian Red Cross and Vazrazhdane Markets, UNHCR and over 13 NGOs. It gives foreigners and migrants access to information on specialized services, as well as guidance for providers of protection, health and legal issues.

The Bureau is established in the framework of #CONNECTION project and funded by a European grant.