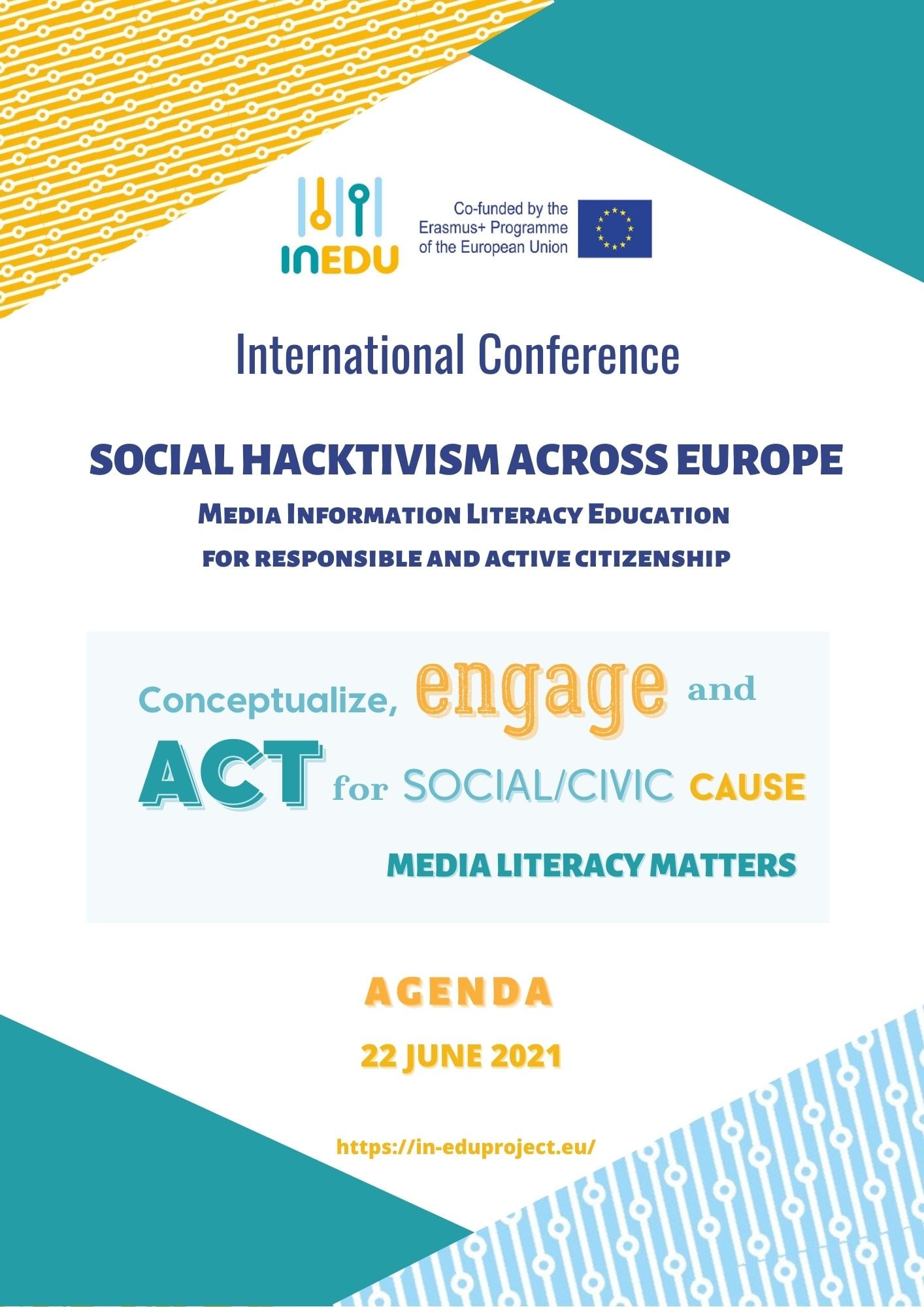 On June 22nd, at 3.00 p.m. CET, the IN-EDU International Event “SOCIAL HACKTIVISM ACROSS EUROPE. Media and Information Literacy Education for responsible and active citizenship” will be held!!

Project partners and international experts will gather online on Zoom and in real life at Barton Park in Perugia, to discuss Media Information Literacy Education in practice, and its role for promoting social activism among young people. The event will also be broadcasted on Facebook.

Check the FULL PROGRAM and don’t forget to tune in and watch the live of the event!!

To participate in the Zoom Event, please register at this link: https://forms.gle/UnNqoracEFYDEr6y5

If you have the possibility to attend the event in Perugia, please register at this link: https://forms.gle/MpJmVAqYmbgtFStF7 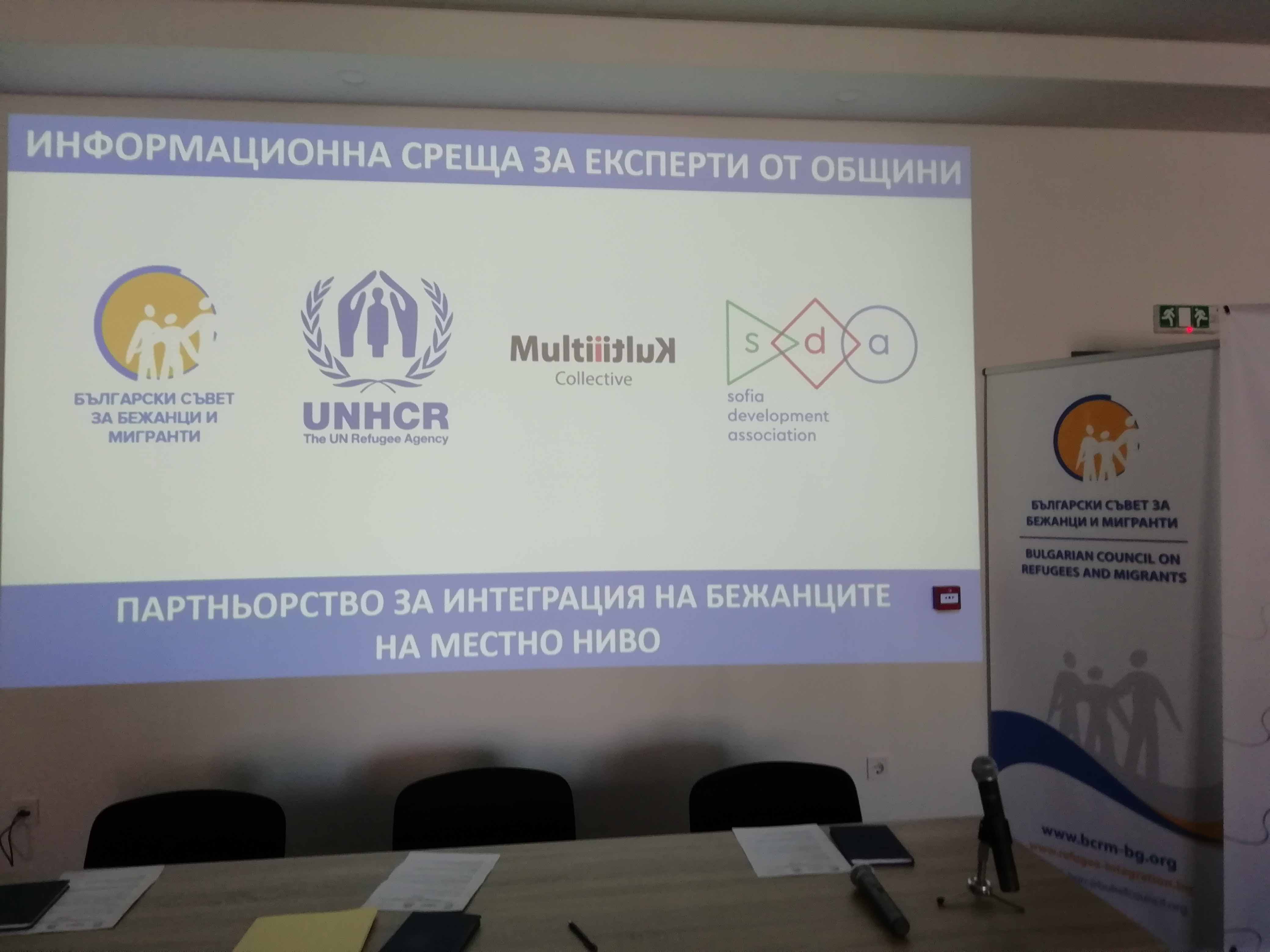 On June 8 and 9, 2021 Sofia Development Association (SDA) was a co-organizer of an information meeting in Plovdiv of local authorities and non-governmental organizations on the topic of integration of refugees at the local level, together with the Bulgarian Council for Refugees and Migrants, MultiCulti Collective, UNHCR. The meeting was attended by over 30 representatives of municipal administrations from Sofia, Plovdiv, Varna, Svoge, Haskovo, Asenovgrad, Svilengrad, Harmanli. SDA was one of the main speakers in the program, presenting the leading experience of Sofia Municipality and SDA in the implementation of measures for the integration of refugees and third-country nationals in the municipality. Since 2015 SDA has been actively working to develop policies and programs in the field of integration, with a focus on public services, urban environment, the labor market, education and culture. Participants in the meeting were interested in hearing about various projects implemented by SDA, the cooperation with the municipal administration, e.g. the introduction of a small grant scheme supporting civil society initiatives, including for integration; as well as the about the new Bureau for Information and Services for Third-Country Nationals, established in 2021 with the support of Sofia Municipality, SDA and the Bulgarian Red Cross. During the meeting, SDA also presented two very important EU-level projects funded by AMIF, through which Sofia and SDA have an opportunity to gain expertise and improve both the governance of migration and integration in the municipality as wells to expand the scope of integration measures in line with the latest EU Action plan and regulations. The two projects are UnionMigrantNet and Cities Together for Integration (UMN) and CONNECTION, led by Eurocities. The city representatives attending the meeting in Plovdiv had an opportunity to learn about the project activities and how they can benefit from the international exchange of good practices. Both projects, which continue until 2022, foresee dissemination and information activities, so that SDA will continue to share its experience with cities and interested organizations around the country. More about the projects at www.sofia-da.eu.

WHAT HAPPENED AFTER THE END OF THE IN-EDU HACKATHON FOR MEDIA AND INFORMATION LITERACY HELD IN BULGARIA?

Unlike many other competitions, the IN-EDU hackathon did not finish immediately after the best teams received their prizes, on the contrary – the participants were encouraged to realize their creative ideas by using the fund, provided by IN-EDU. The aim was to promote the topic of media and information literacy widely and to do it through the students, in their language, because they know best how to attract like-minded classmates and how to present this topic to their parents. The stimulus for the teams was not only the opportunity to put their knowledge into practice, but also to win the additional awards.

The results speak for themselves – for only 4 months the 6 awarded teams managed to engage more than 500 000 students and parents through their campaigns. They have used their creativity to produce content varying from simple educational posters and posts through interviews with public figures in the form of podcasts to guidebook for media and information literacy. All these materials were created after throughout research and were widely spread both online and offline. Thus they managed to help their audience to orientate better in the digital world.

The teams presented the results of their campaigns during an online event, which was held on 28th of May and streamed for the general public. The public had to make the hard decision who deserves most to receive the two additional awards – 1500 BGN and working visit to the Bulgarian National Television. The teams MEDIAcated and Messengers were selected as the best of the best. The visit in “the kitchen” of the Bulgarian National Television was a special prize provided and organized by Sofia Development Association and it seemed to be highly appreciate by the teams. They got involved in the whole process of getting ready for being on air, met journalists, gave interviews, fell in love in the atmosphere and even considered to follow the lead of the their mentors of the day.

The decision for the rest of the financial prize in the amount of BGN 3,500 was taken by Sofia Development Association and DZZD Obuchenie having into consideration the full reports of the activities of the teams. The awarded teams were MEDIAcated, Messengers and Our voice – now they have the chance to develop their campaigns even further and make a positive change in the online behavior of their audience. Congratulations and good luck!

The hackathon is organized by Sofia Development Association and DZZD Obuchenie in the framework of INclusion Communities through Media Inclusion and Critical Thinking EDUcation (IN-EDU) project, co-financed by the EU Erasmus + Programme. 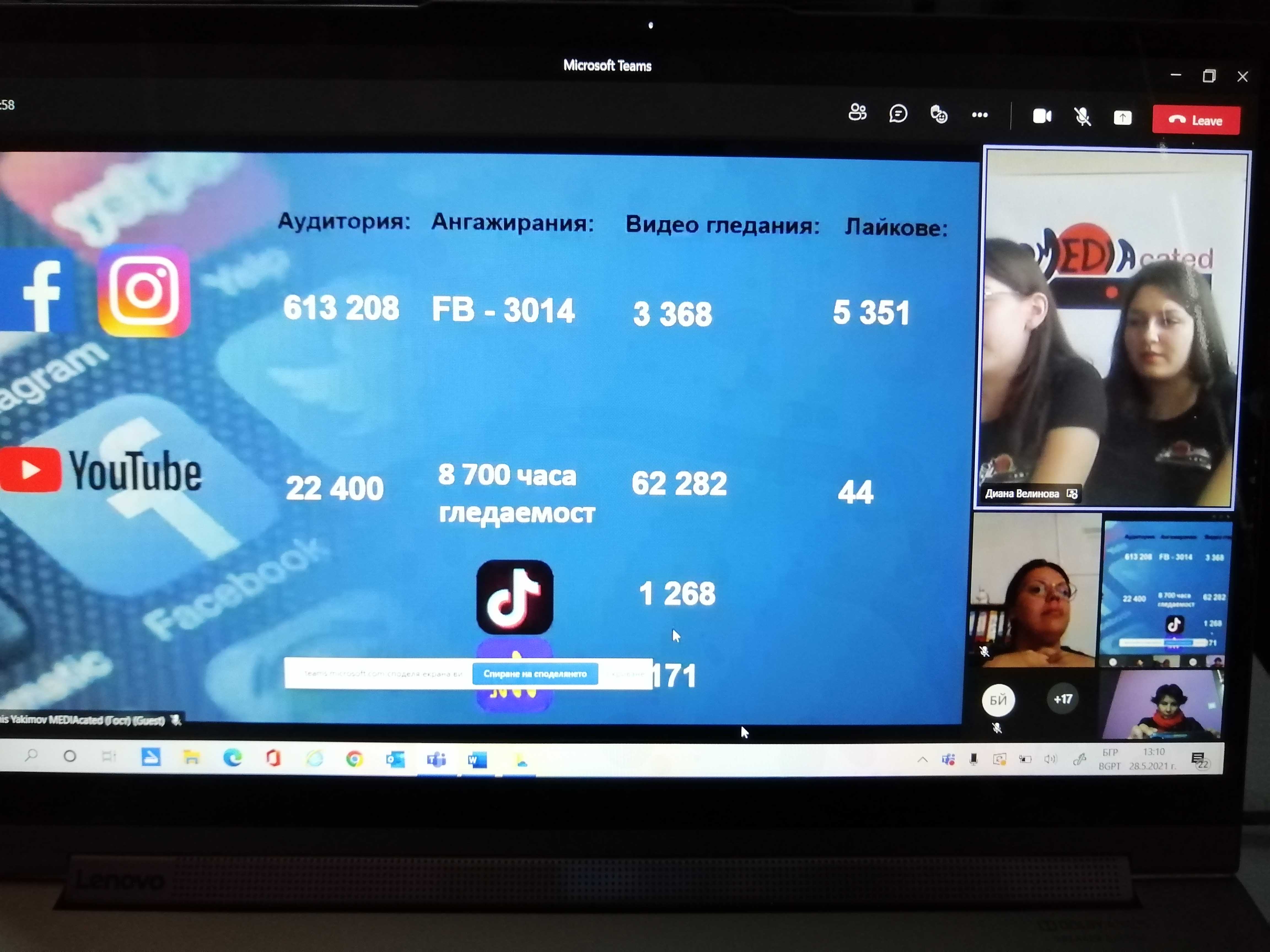 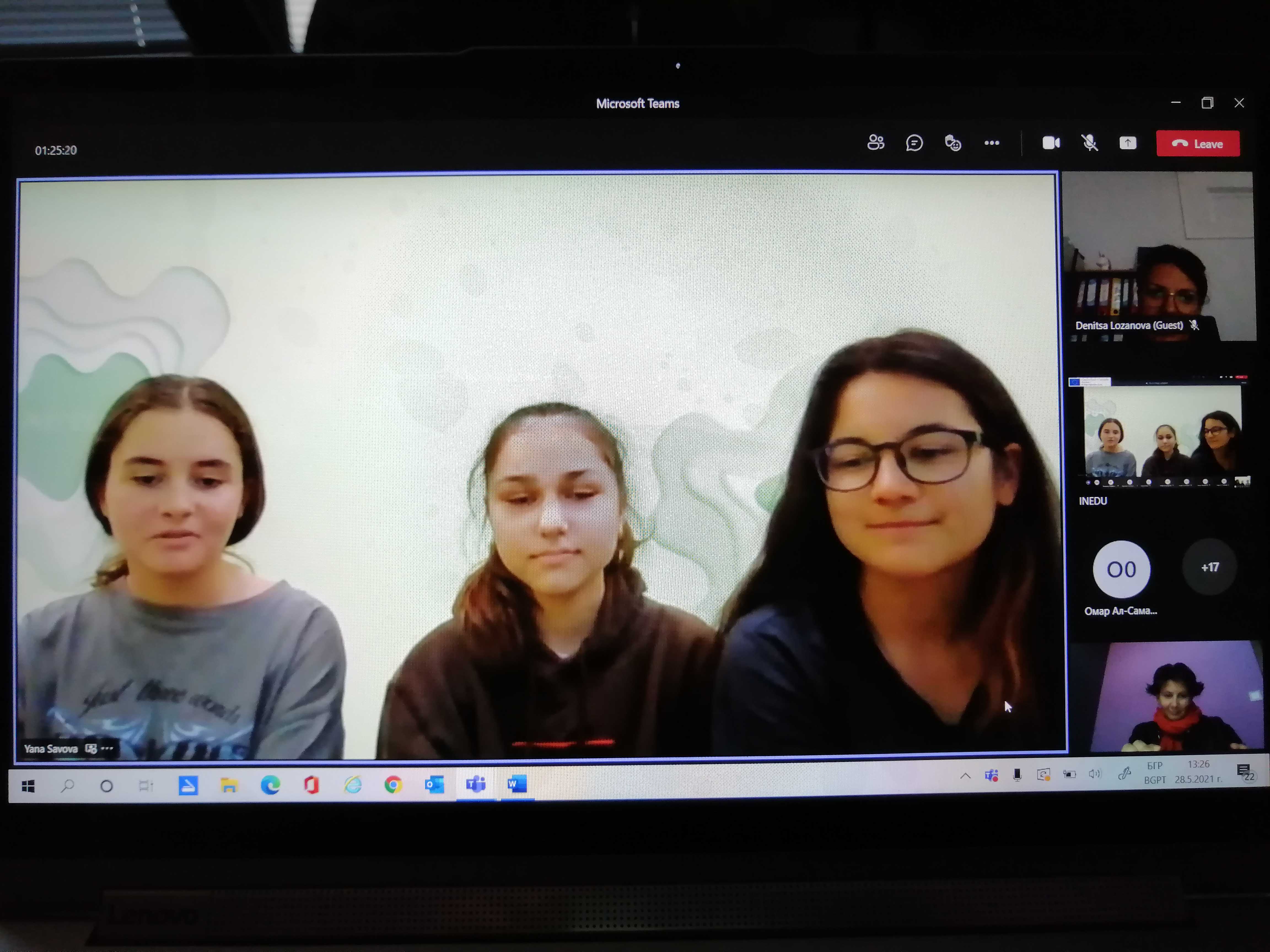 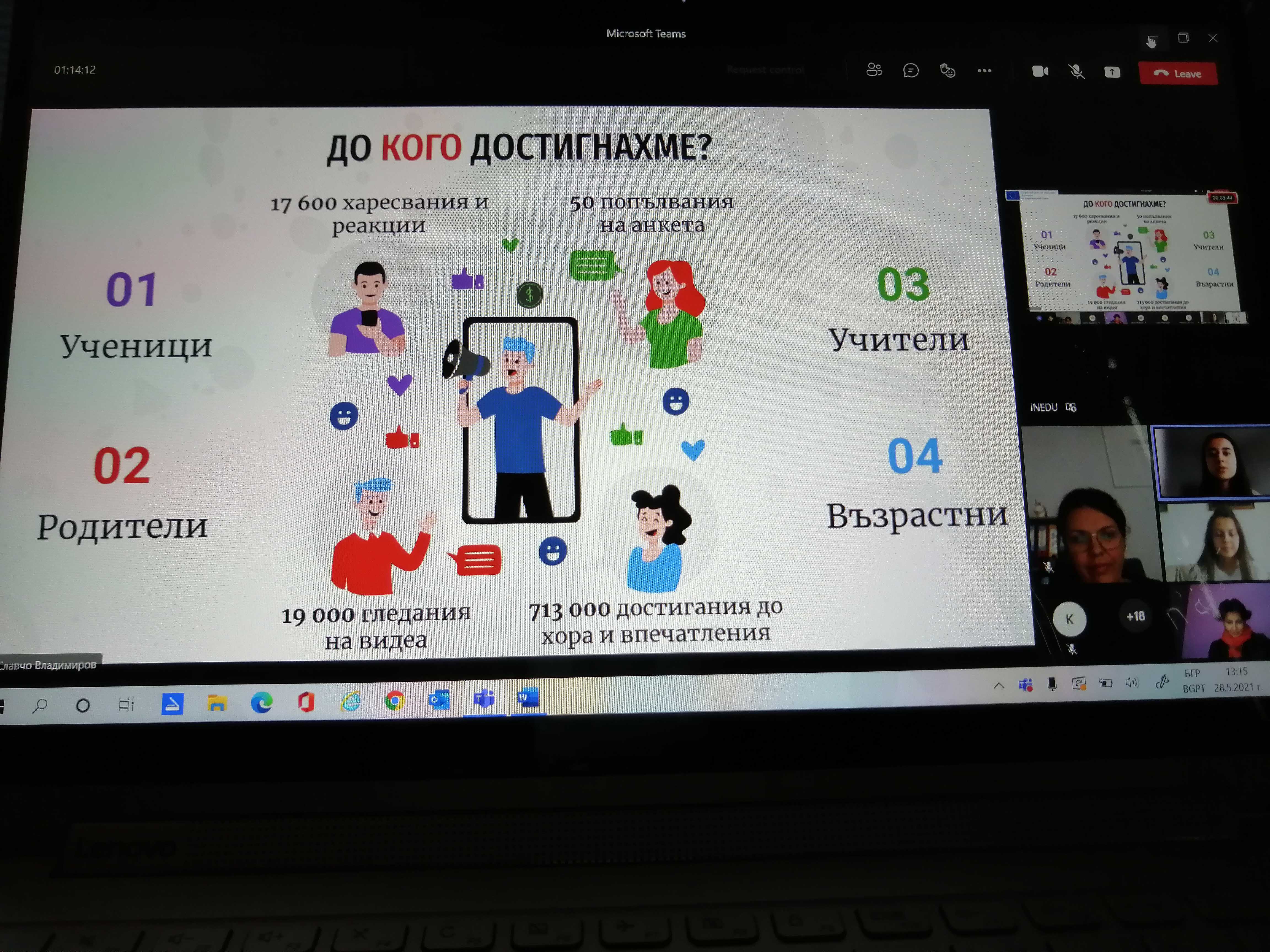 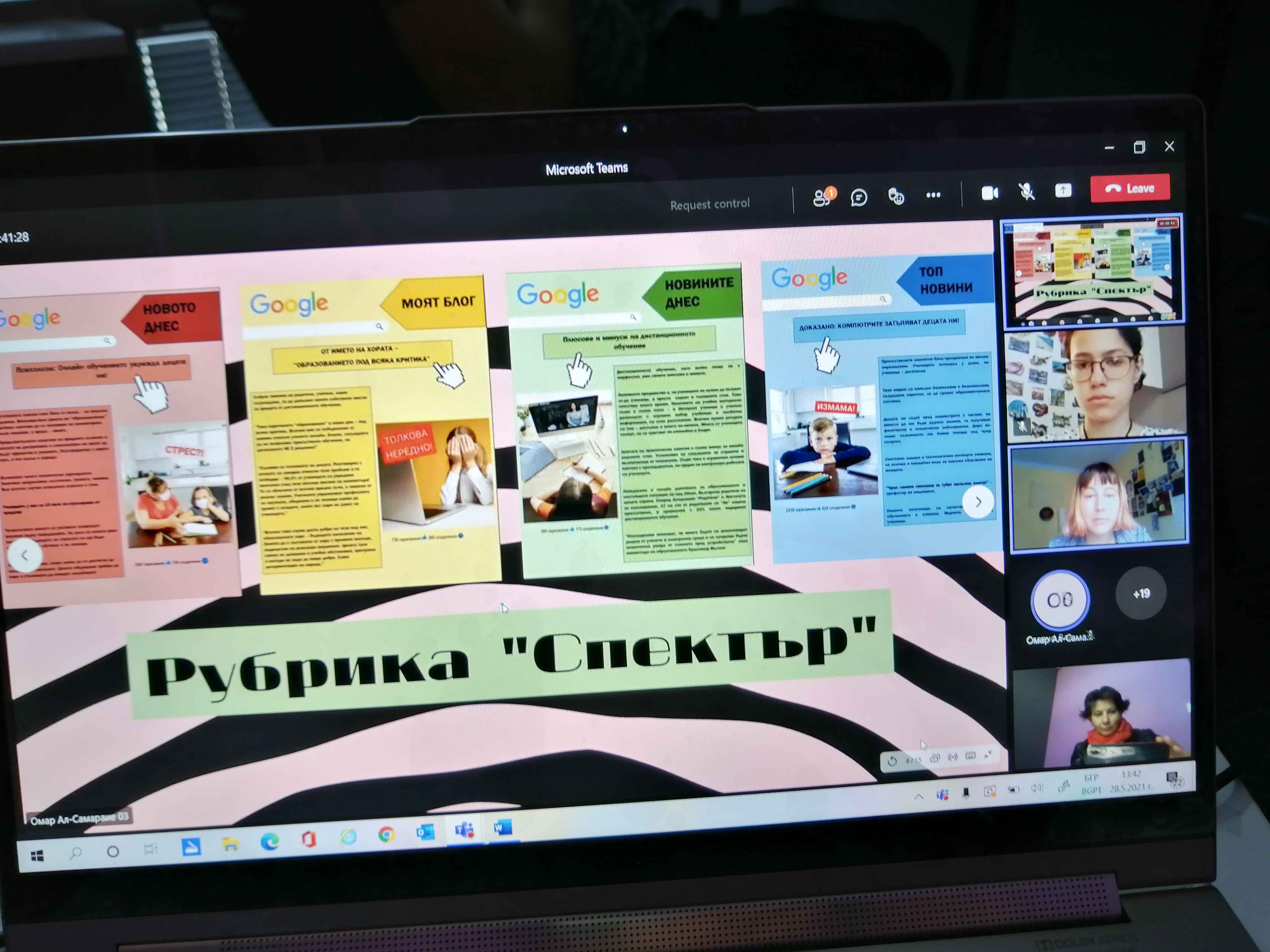 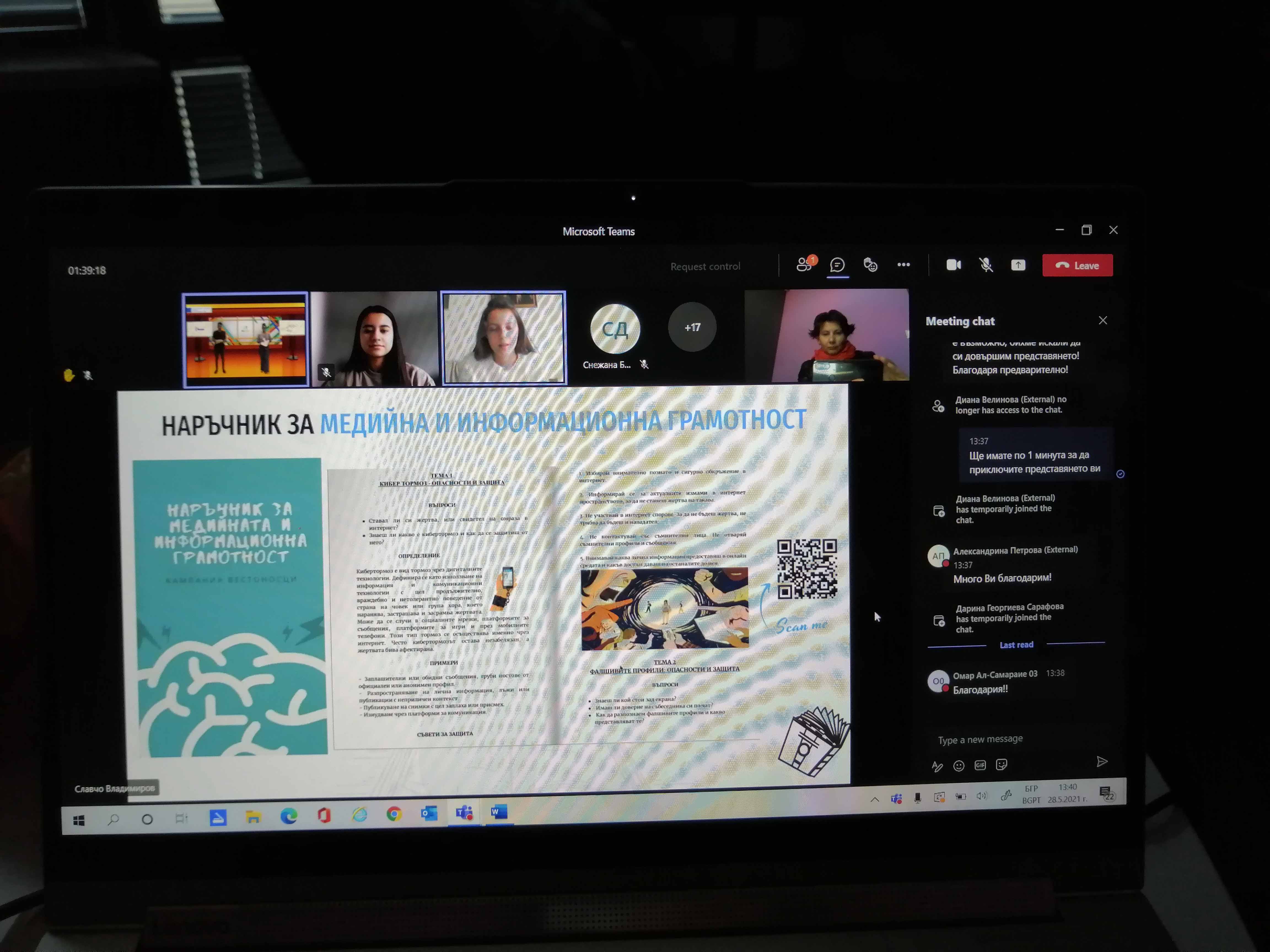 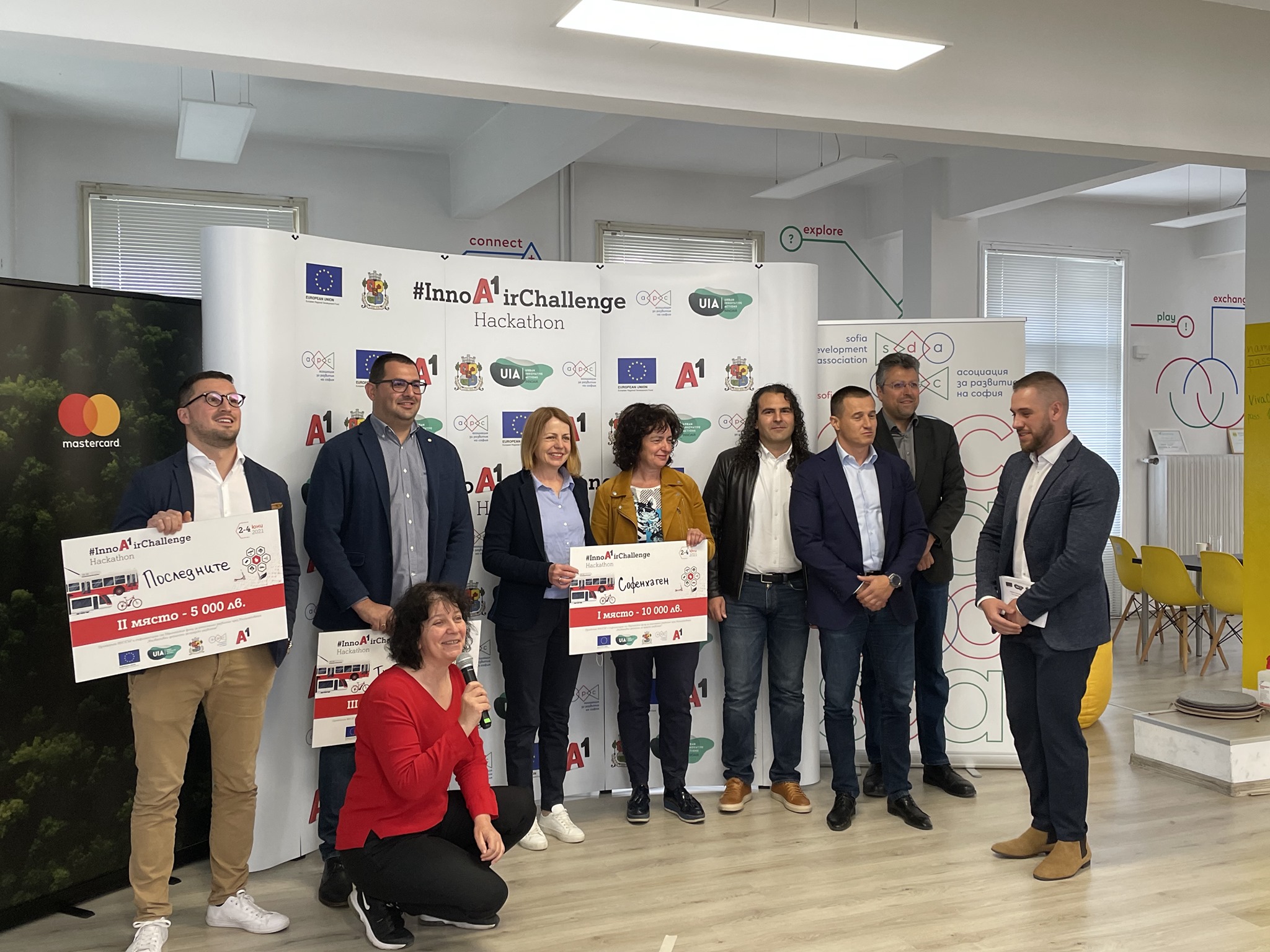 The hackathon InnoAirChallenge: Making urban mobility smarter, organized by Sofia Development Association and A1 Bulgaria, was held online in the period 2-4 June, and gathered 24 teams from 7 cities in a race for a cause. All participants worked online on the difficult task of developing and presenting projects that outline the vision of a future generation of transport services and connectivity that work for cleaner air in Sofia.

After the official opening of the hackathon on 2 June by Sevdalina Voynova, project coordinator of INNOAIR, and Kristian Krastev, Deputy Mayor for Transport in Sofia, the participants had about 36 hours to grow their ideas. The development of the ideas was digital, and the teams had the opportunity to consult with mentors from business, academia and Sofia Municipality who work on similar issues. Among the main questions that the teams’ ideas had to answer were ways to make the public transport in Sofia more environmentally sustainable and attractive for citizens.

The Mayor of Sofia Yordanka Fandakova congratulated all participants for their hard work. "I thank all 68 participants from the bottom of my heart for participating in this very important project through the competition. Change is possible if we all participate in it together – if we argue, seek and find solutions, and support each other. The modern urban transport is important for air quality and the environment. In recent years we have been doing large-scale modernization, introducing electronic systems, video surveillance, etc. and I am glad that so many inspired, young people are developing green solutions in our city and giving ideas on how to make the public transport even more attractive to all citizens."

The prize fund of BGN 21 000 gave an opportunity to further develop the most creative ideas in the hackathon. The winning teams, determined by a competent jury, have the opportunity to help turn Sofia into a greener and smarter city by investing their prizes in the realization of their ideas.

The projects were evaluated based on criteria for originality, applicability and technological approach in real time. The decision for the best ideas was made after a lively and intense discussions. The “Sofenhagen“ team won first place and BGN 10 000, with its project for an application that offers cycling routes and allows cyclists to give feedback on the routes. They managed to convince the jury that "their next automobile will be a bicycle".

"Participating in the Hackathon was very useful for us for several reasons. Perhaps the most important of these was the validation of our idea and its ability to solve a problem in the real world. The hackathon was also a good test for our organizational skills, because in order to present the project in such a short period of time we had to be very disciplined. We will use the award to build a fully functional application that provides users with the most convenient way to find safe cycling routes in Sofia," shared the “Sogenhagen“ team.

“Poslednite“ took the second place and received a BGN 5 000 check for their idea for an integrated system of sensors for measuring air quality, noise pollution and other indicators. “Innovaone” team from Harmanli came in third, winning BGN 3 000 for their project for a device with a solar panel and sensors that measure fine dust particles and water quality.

The prizes for the first three teams were provided by A1 Bulgaria. In addition, Mastercard provided a special prize of BGN 3 000 for the “Asembria” team, which presented a mobile application that makes it easier for blind citizens to use public transport.

Sofia Development Association provided a special prize of BGN 1 000 for the “KiNation” team from Burgas, which presented a project for an external device for bus stops that purifies the air and monitors pollutants.

A special award was also given by Sofia Urban Mobility Center, who awarded the “ITG“ team, which developed a system for counting passengers through cameras installed inside the vehicles. The four participants received free semester passes for the entire city network of public transport.

The competitive ideas varied and ranged from replacement of the controllers’ devices with a mobile phone, through a shared parking system in private parking lots, to a hub project - solar transport stop, which integrates classic and public transport and information, as well as terminals for food deliveries, bill payments and fitness equipment.

The hackathon InnoAirChallenge: Making urban mobility smarter was the first of a number of hackathons and competitions that Sofia Development Association will organize within the INNOAIR project. The competition gathered many meaningful ideas that are to be realized. You can see their public presentation in the recordings of the live broadcast on the Facebook page of INNOAIR. 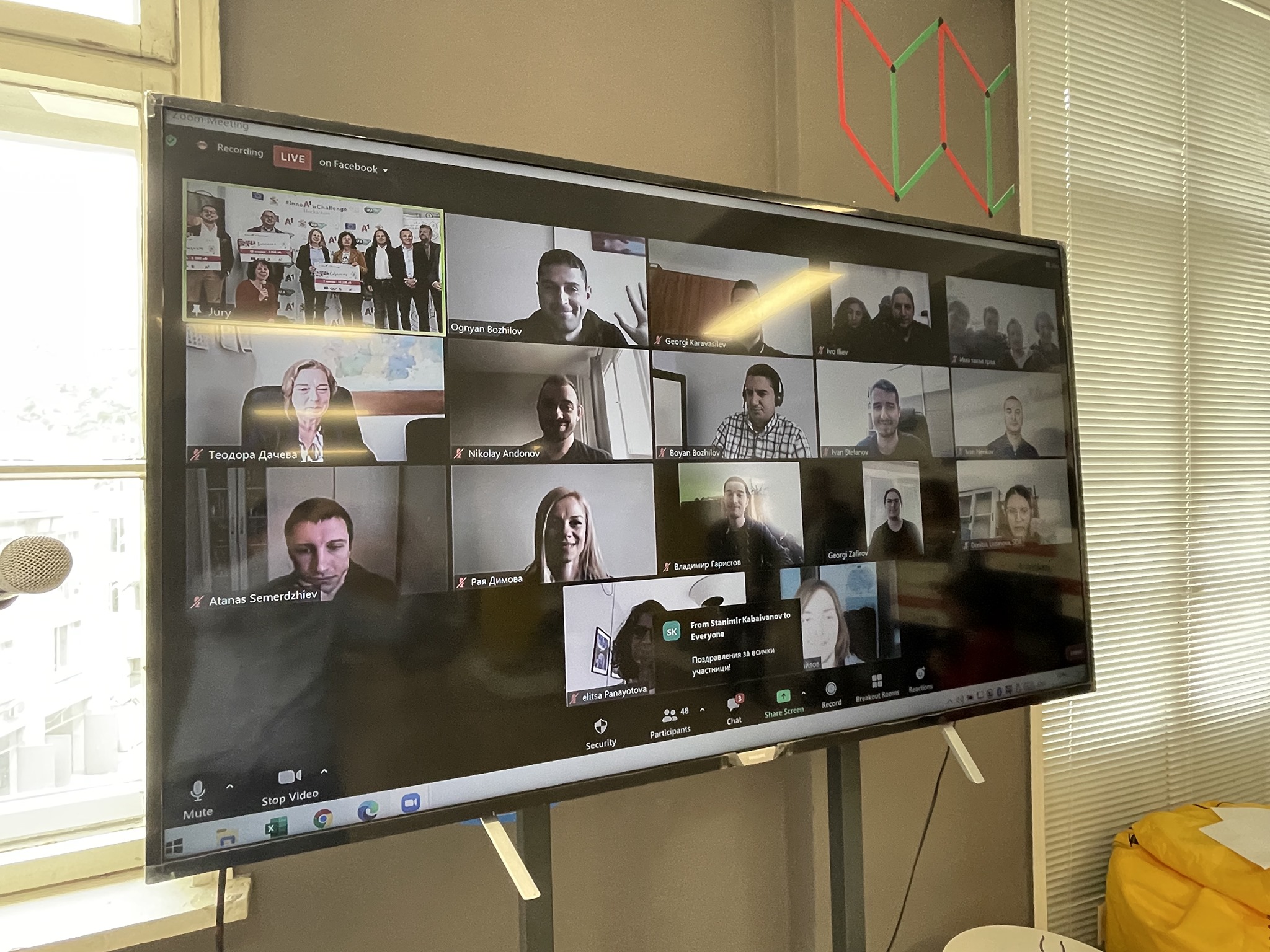 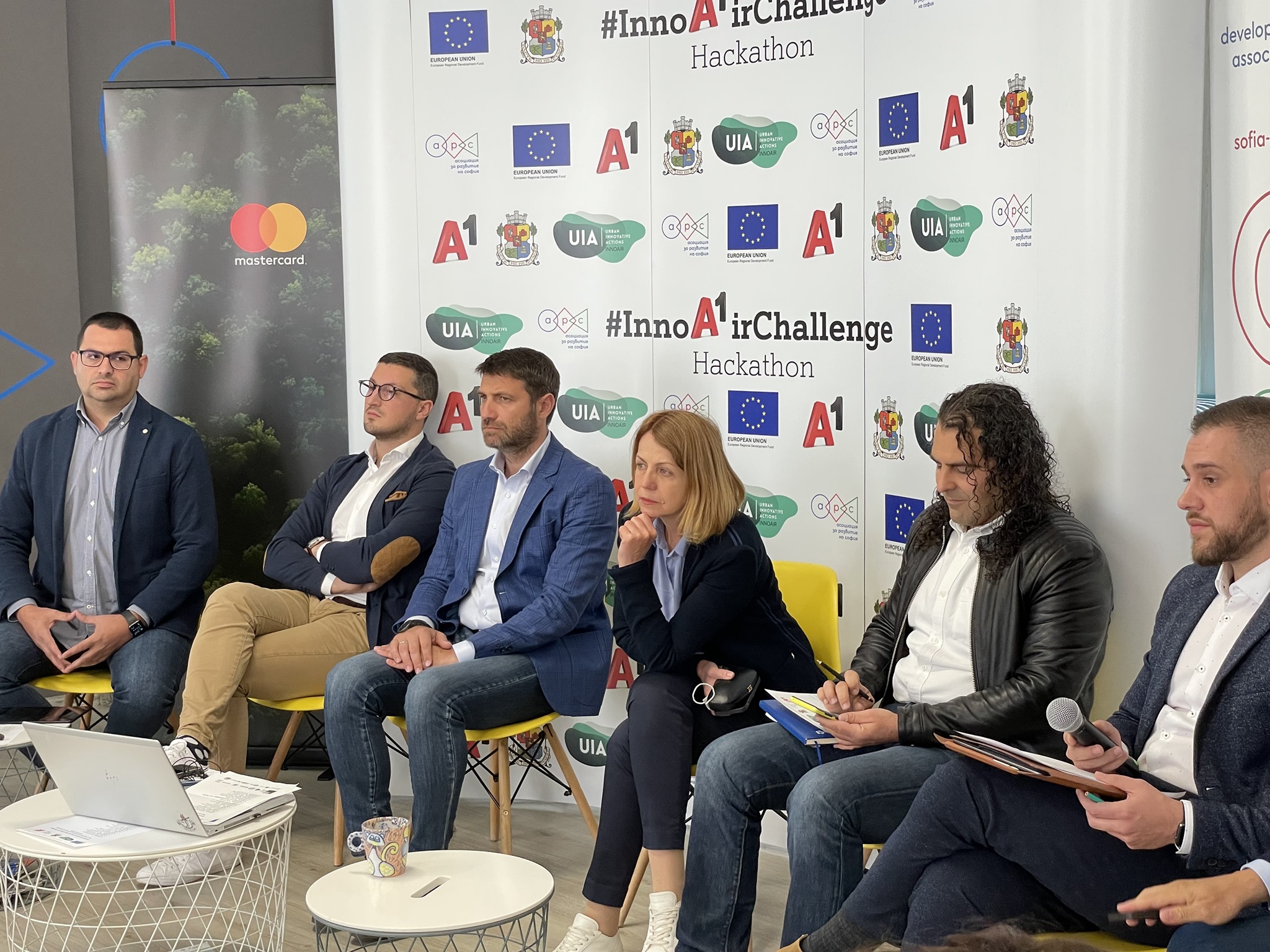 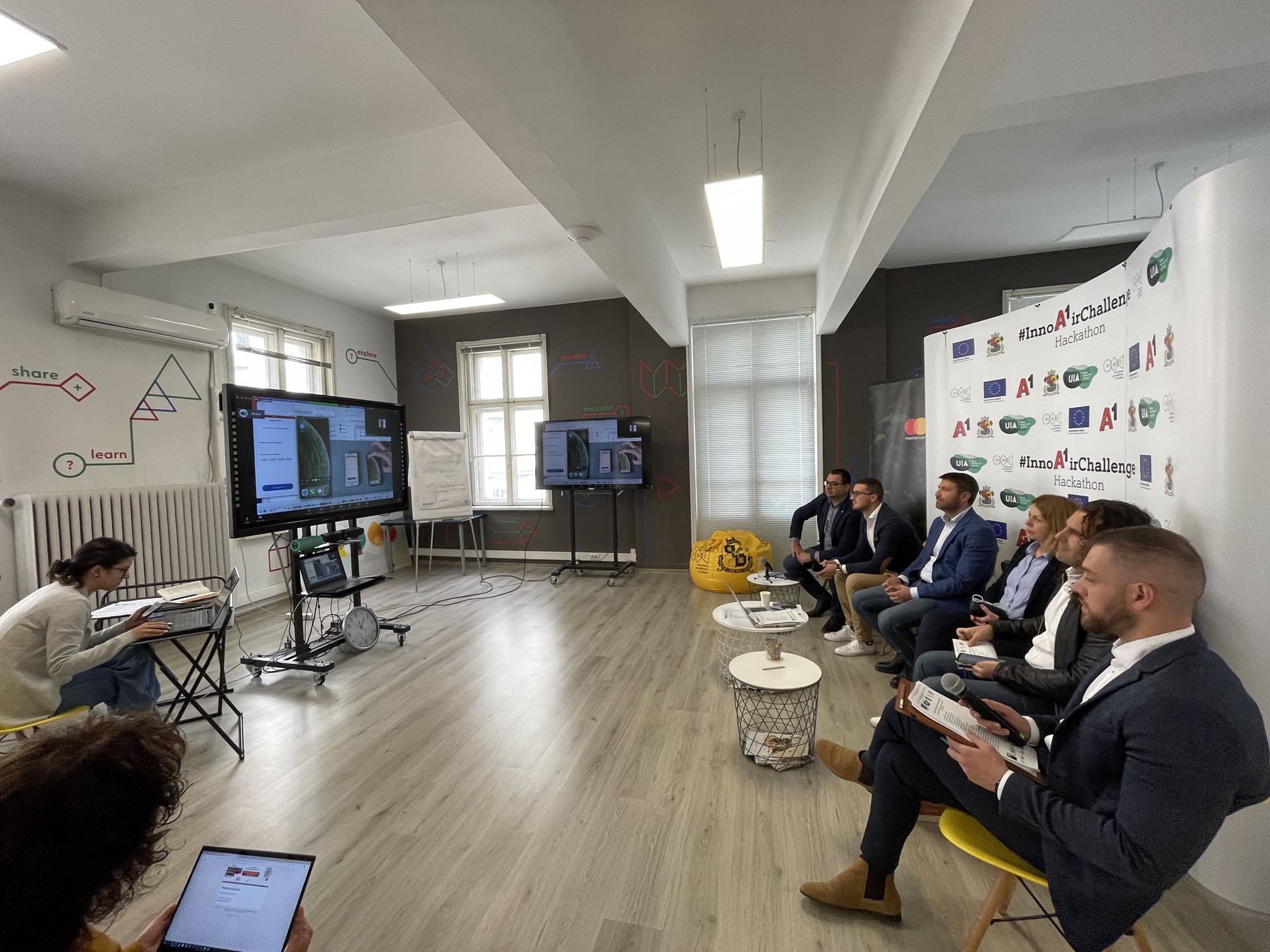 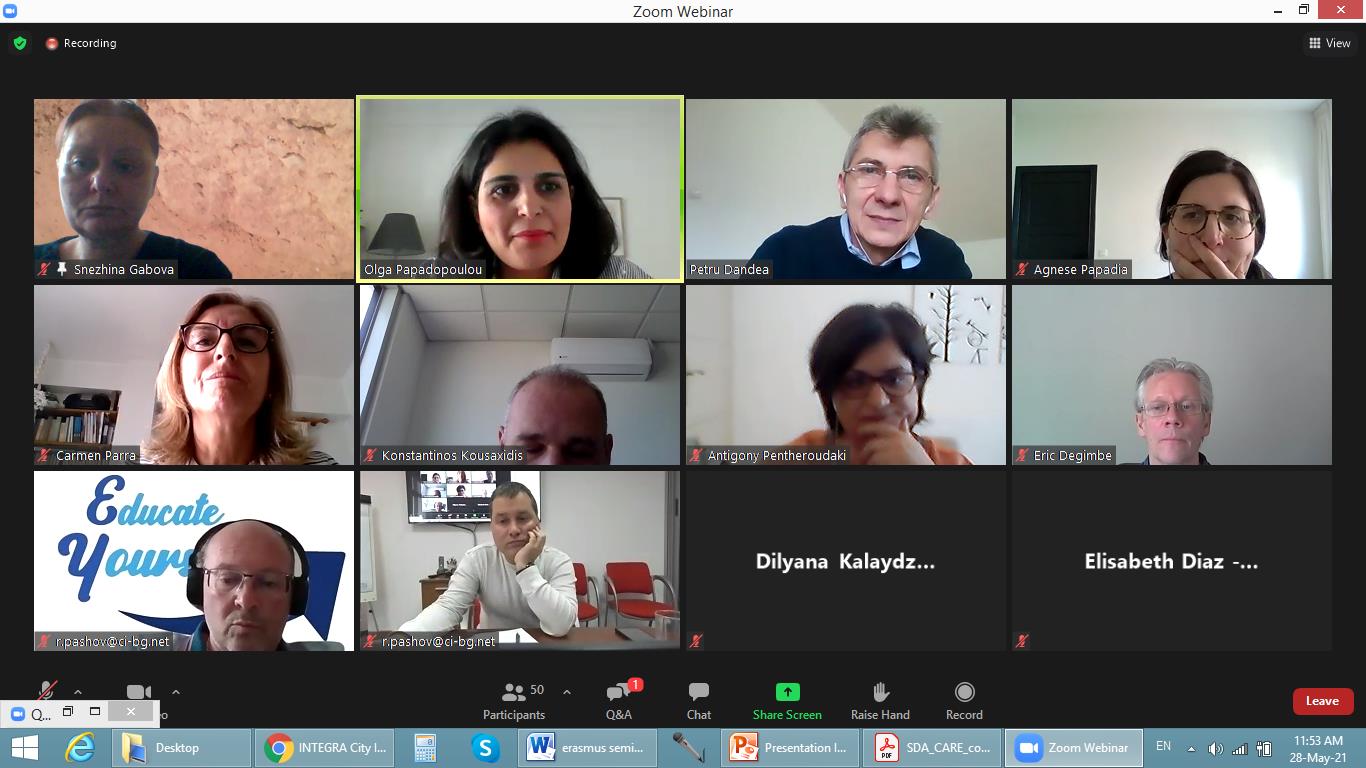 As part of the ongoing awareness and advocacy campaign of the UMN project, SDA took part in an international forum, organized by the consortium of the project Educate Yourself: Social inclusion through self-education and learning for migrants (https://platform.integritybg.com), funded by the Erasmus+ program. SDA presented the methodology and key messages of the UMN awareness-raising campaign, which aims to mobilize local employers, social partners, and NGOs to support the integration of third-country nationals (TCNs) in the local labor market through activities for increasing their knowledge, facilitating the recognition of their skills, connecting them to local employers. The Bulgarian members of the consortium of Educate Yourself will be invited to join the coalition of local stakeholders, established by SDA within the UMN project to support TCNs to find employment in the labor market in Sofia. 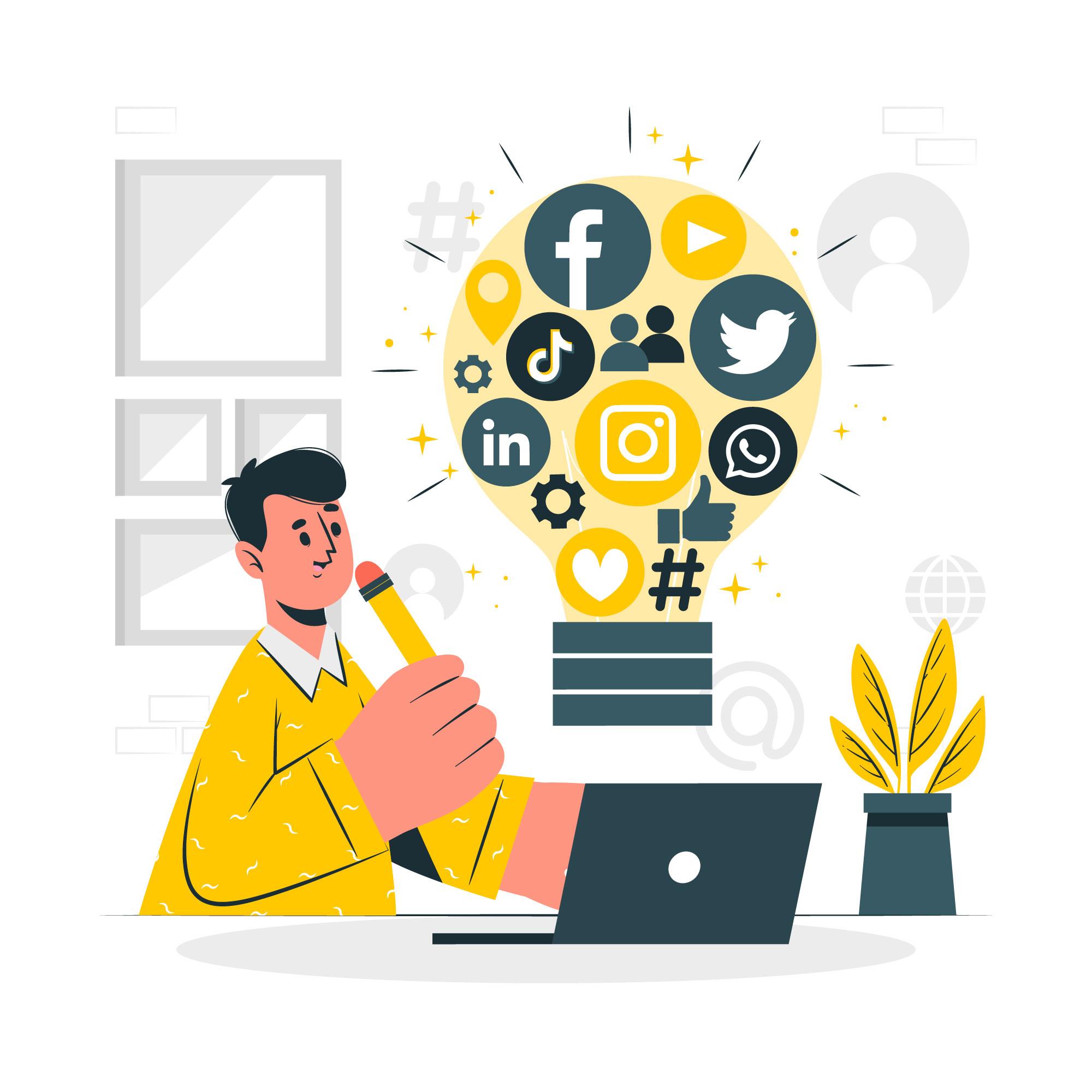 Starting in May, 2021, SDA will be a part of an international consortium with organizations from Austria, Hungary and Slovakia, implementing the project Social Innovation Plus - Competence Centres (SI PLUS). The project, led by Lechner, Reiter & Riesenfelder Social Research OG, aims at advancing the development of social innovation (SI) by mapping and supporting existing initiatives and establishing new approaches. The project will support relevant ESF and ESF+ stakeholders through offering information, knowledge and know-how, through providing advice, guidance and training, and through organizing networking and mutual learning formats at national and European levels. The planned project is going to establish SI competence centres in Austria, Bulgaria, Hungary, and Slovakia in order to support ESF Managing Authorities in planning and implementing subsidy programs for boosting SI, as well as social innovators in order to benefit from these programs. The project’s duration is 24 months.

The project is funded by the EUROPEAN COMMISSION, European Social Fund and European Programme for Employment and Social Innovation.