The Future of Project Management – Project Leadership, Competences and Culture 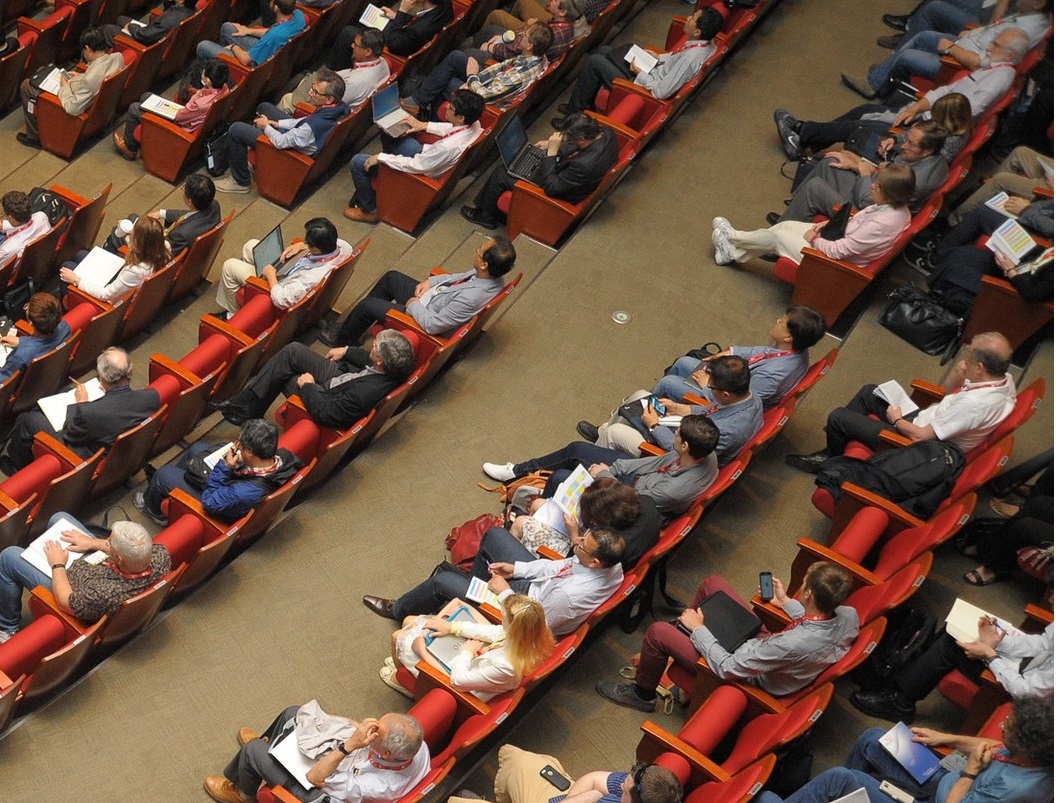 The annual conference of the International Project Management Association brought together on October 10, 2018, project managers, executive directors from a broad spectrum of industries, representatives of national and local governments, to discuss the newest trends and good practices in project management. From projects in the area of marketing and HR to projects funded by European institutions, IT projects, construction projects, the demand for effective organising, coordination and communication skills is critical for their successful completion.

Sevdalina Voynova with Sofia Development Association was a panelist in the panel Project Management – A key Factor for Municipal Development, and shared the experiences and lessons learned of the organization in managing European, national and local projects on behalf of Sofia Municipality. The panel was moderated by Ivan Velkov, deputy chairperson of Sofia Municipal Council. 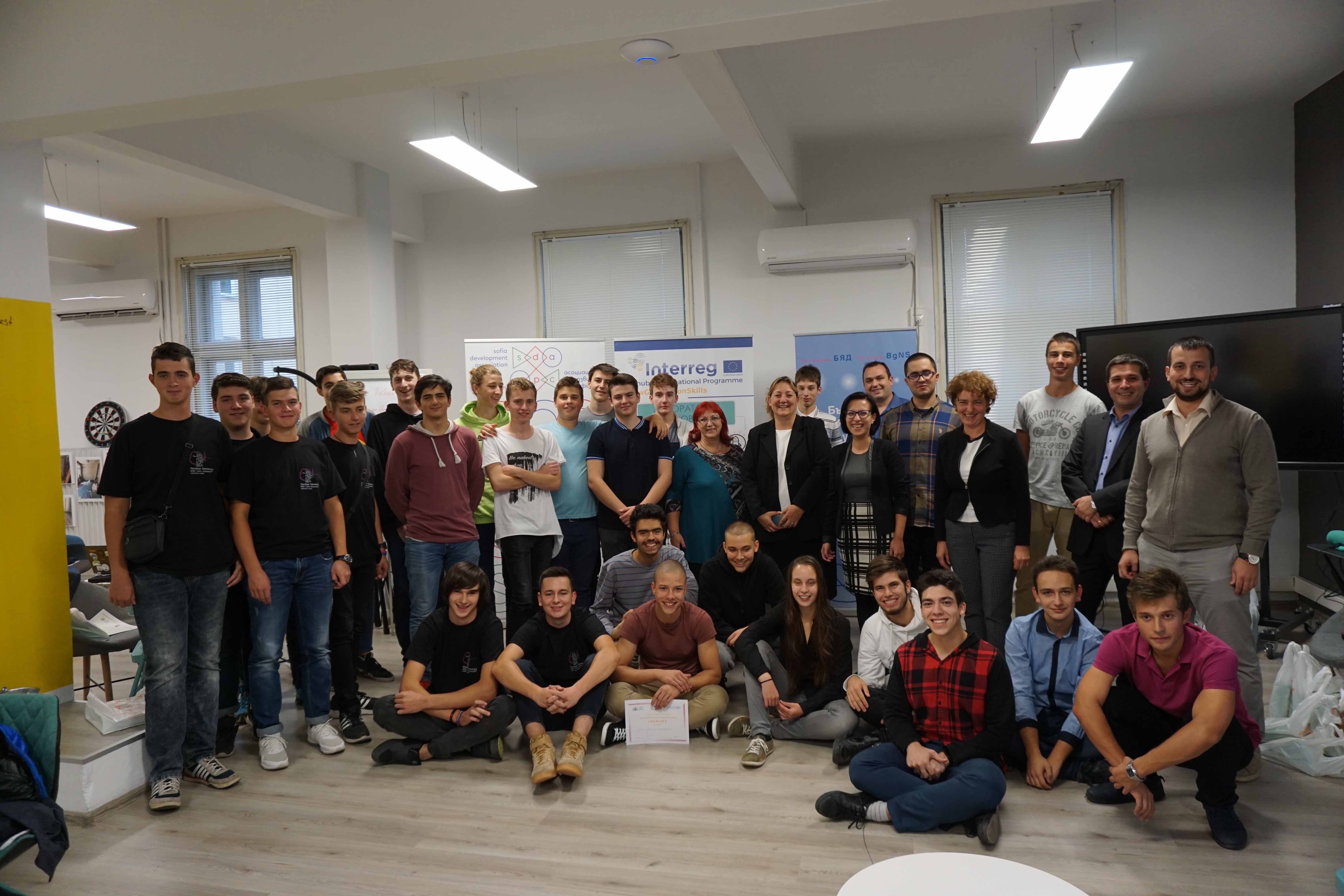 The first Hackathon on Information Technologies in Nuclear Science and Technology held in Eastern Europe is now over. After an intensive day of lectures, exchanges with scientists and businesspeople, brainstorming and programming, the five school teams presented their work over 12 hours, prototyping solutions to the problems and opportunities in the field of nuclear science.

The project by team “John Atanasoff” is called “Nuclear Energy and its Safe Application.” The students believe there can be no innovation unless people are convinced that nuclear energy is safe and don’t confuse nuclear bombs with nuclear power plants. This is why the team proposed a wide platform for educating the public and adapted a robotic arm they had previously designed for disarming explosives to be used in high radiation scenarios.

The ELSYS team proposed the “Optimization of Nuclear Reactor Design via a Genetic Algorithm.” The problem this project addresses is that the optimization of a nuclear reactor has many different purposes, many variables, and many local problems, i.e. there is no guarantee that a particular optimization would lead to the best general design. The genetic algorithm the team used is derived from nature and contains the phases of population, selection of the most appropriate elements, pairing and mutation of the elements placed in an appropriate environment. The team generated a simulated model of a nuclear reactor and applied the genetic algorithm to outline the most effective optimization of the design, based on variables such as price, number of reactors, fuel and others.

NHSMNS (physicists and programmers) developed a demo version of a nuclear physics educational website. The site compiles information arranged by topic, resources, video lectures and tests, as well as a discussion forum the team plans to develop in the future. The test section allows users to register and learn on the basis of interactive educational games: correct answers win a badge, while incorrect responses return the user to the information from that section of the test to re-study, and then automatically generates a new test. The site includes a section for news and events.

SHSM team #2 took on the problem of radiation pollution of water resources. The example the team worked on is the Rossen mine and the polluted beach Vromos near Chernomorets. Their proposal is to use zeoliths (minerals that can absorb certain elements with a specific mass) to reduce the radiation pollution and to clean the beach using centrifugal sedimentation.

SHSM team #1 also saw the information gap in the area of nuclear physics, and designed an educational website full of graphs and images intended to help students in this area of physics and to prepare them for physics competitions. The website links up students with theoretical physicists, and students compete amongst themselves in real time and can keep track of their rating and success.

SDA is a project knowledge partner in the NGS project under the Danube Transnational programme, co-founded by the EU funds (ERDF and IPA), http://www.interreg-danube.eu/approved-projects/newgenerationskills. 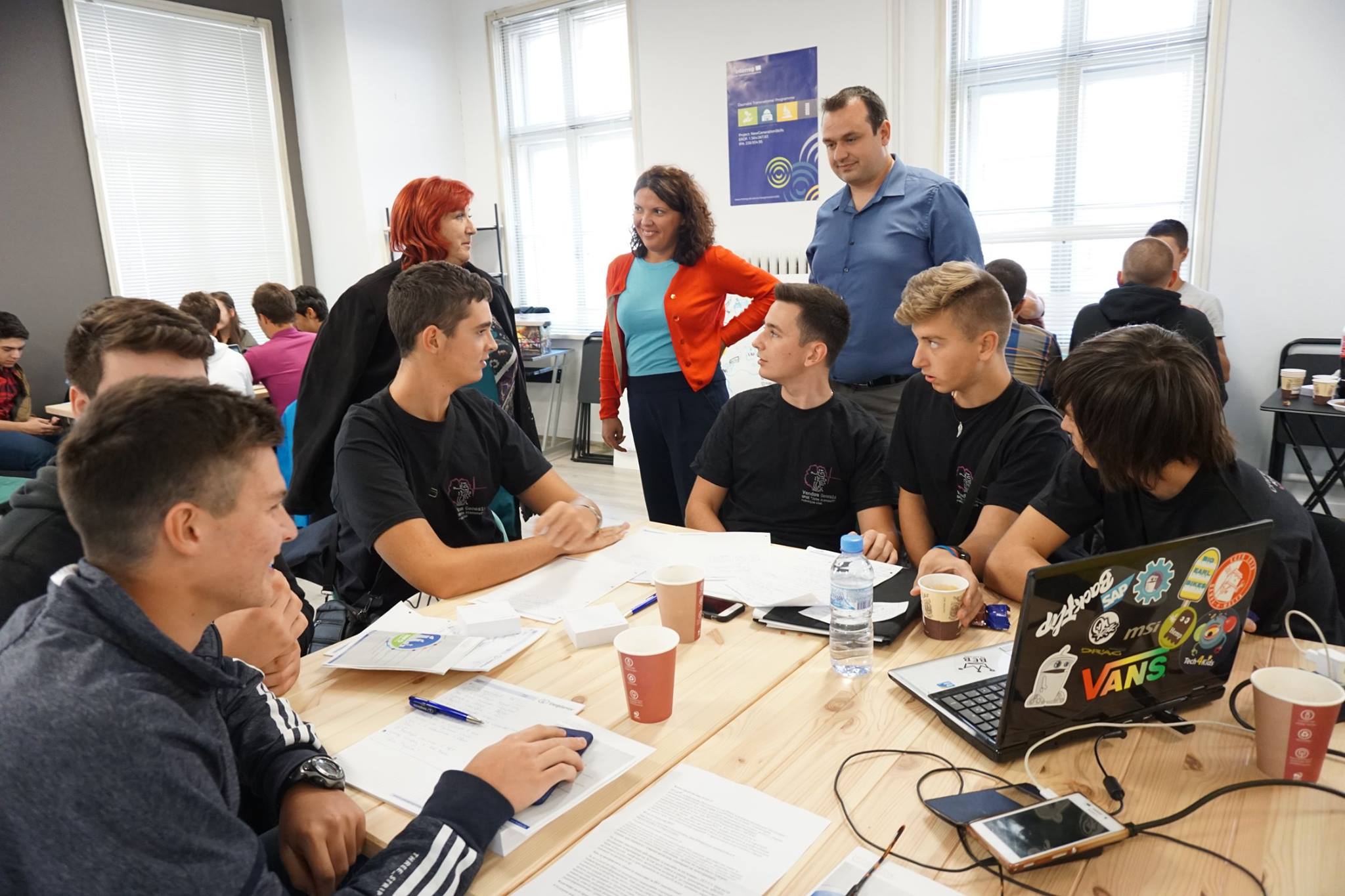 “Physics was my favorite subject in school, even though I ended up in a different field. We hope that many of you will continue to work in physics and new technologies.” With words of hope, Mayor of Sofia Ms. Yordanka Fandakova welcomed the students competing from Sofia Vocational High School of Electronics “John Atanasoff,” National High School of Mathematics and Natural Sciences “Academician Lyubomir Chakalov,” the Technical School of Electronic Systems, and Sofia High School of Mathematics “Paisii Hilendarski.” She added, “This year’s Nobel prizes were awarded for scientific advancements not in pure science, but in concrete applications for improving people’s lives. I have hopes that a future Bulgarian Nobel laureate is here in this room today.”

The Nuclear Technology Hackathon is organized by the Bulgarian Nuclear Society, Sofia Development Association, and the Institute for Nuclear Research and Nuclear Energy at the Bulgarian Academy of Sciences. The event is held at the Sofia Innovation Lab and is part of the Labs’ dynamic training program aimed at stimulating innovation and entrepreneurship.

Five teams from Sofia schools are competing to search for and develop applications for nuclear science using data and intelligent control systems. The competition ends at 16:00, and the award ceremony begins at 17:30. The special prize will be awarded by MEP Mr. Vladimir Uruchev – a visit to the European Parliament upon his invitation.

STUDENTS DEVELOP IT PROJECTS IN NUCLEAR SCIENCE AND TECHNOLOGY 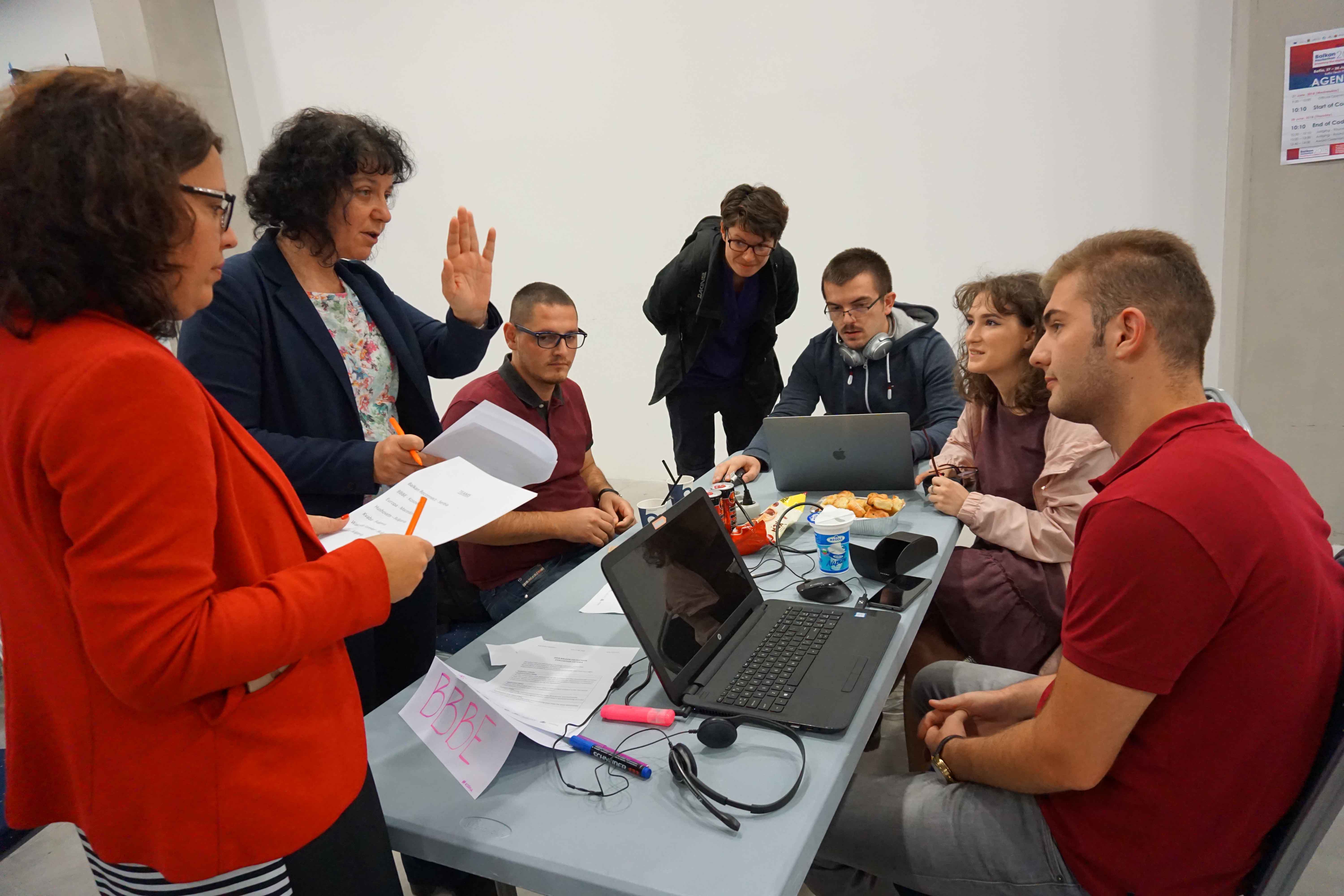 Five teams of students from leading schools in Sofia will compete in the tech-educational competition “Information Technologies in Nuclear Science and Technology.” The competition will take place on October 5th 2018 at 9 at Sofia Innovation Lab (Sofia, №1 Serdika Street, 3rd floor), which opened doors as part of the New Generation Skills Project, co-funded by the ERDF and IPA EU funds.

The event is part of the Innovation Lab’s dynamic training program, which aims to stimulate innovation and entrepreneurship, and is among the Bulgarian Nuclear Society’s initiatives for raising student interest in high-tech fields, including nuclear science and technology.
The first stage of the event includes lectures on the latest developments in the field, as well as an overview of the future employment opportunities that the industry provides.

The second stage of “Information Technologies in Nuclear Science and Technology” is a competition with elements of a hackathon, in which young people get to apply their innovative potential to practical challenges of integrating Industry 4.0 with nuclear technologies. In the form of 10-minute presentations and demonstrations of the IT products they have developed during the competition, teams will present their vision for the application of cyber-physical systems, intelligent control systems and IoT in the field of nuclear science, as well as their own completely new ideas. Their work will be mentored and judged by recognized members of the business world, entrepreneurial ecosystem, and academia.

One of the benefits of an event like this is the opportunity to stimulate the search for digital solutions that can augment the achievements in nuclear science and to encourage innovative applications of nuclear energy, physics, medicine and radiation protection, as well as nuclear safety and security.

Among the official guests of the competition will be the Mayor of Sofia Ms. Yordanka Fandakova, Member of European Parliament Vladimir Uruchev, Director of the Institute for Nuclear Research and Nuclear Energy at the Bulgarian Academy of Science Prof. Dimitar Tonev, and Chair of the Bulgarian Nuclear Society Mr. Mladen Mitev.

SDA is a project knowledge partner in the NGS project under the Danube Transnational programme, co-founded by the EU funds (ERDF and IPA), http://www.interreg-danube.eu/approved-projects/newgenerationskills.

“The Academy for training of cultural managers has developed and sustained as a regional Balkan project“, said the Mayor of Sofia Mrs. Yordanka Fandakova at the launch of the regional conference and network meeting of the Regional Balkan cultural academy network, held in Sofia between 29 September and 1 of October, 2018. “We started with Sofia Development Association this academy in 2013 as an initiative related to Sofia candidacy for European Capital of Culture. However, this project is among the numerous examples of sustainable developments that have been recognized as successful European best practices”, the Mayor pointed out.

Since last year the Academy is implemented in partnership not only with Goethe-Institut in Sofia but also the institutes n Thessaloniki and Bucharest, while this year the institute in Sarajevo also joined in. “Thus we turn the Academy into an innovation lab for culture and space for mutual learning and establishing partnerships”, added Mrs. Fandakova.

The conference and the network meeting brought together over 50 managers from the four countries, who had already undergone a week-long training in Sofia, Sarajevo, Thessaloniki or Bucharest, to exchange experiences in the areas of cultural heritage, digitalization and innovation. The last day was devoted to generating ideas for collaborative joint projects. The idea camp was took place in the new space of SDA – Sofia innovation lab, which just opened doors.

Since last year SDA also produces also an annual publication with texts of Academy participants and experts. This year’s publication will be devoted to the topic of cultural heritage – the main theme of the training program as well.

For its 5 years of existence the Academy has given the chance of over 120 Bulgarian cultural managers to improve their knowledge and skills. The Academy already has over 220 alumni from the Balkan countries, who are the ambassadors of new cultural policies and new management models in culture. 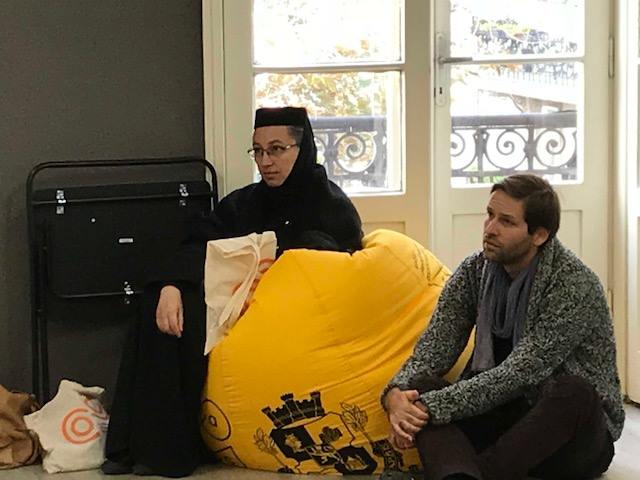 On September 27 and 28, 2018 the staff exchange visit to Krakow, Małopolska Region, took place as part of the project InnoBridge – Bridging the innovation gap through converting R&D results into commercial success in a more effective and efficient way. Snezhina Gabova from Sofia Development Association and Prof. Rumen Nikolov, member of the project stakeholder group, participated in the visit, together with partners from Finland and Austria.

The purpose of the staff exchange was to learn from the experience of the Polish partners in organizing and developing initiatives in support of the innovation ecosystem in the region through the utilization of European structural funds. One such good practice is the organization of the annual Małopolska Innovation Festival (since 2011), a region-wide, one-week long event that brings together companies, start-ups, universities, entrepreneurs and scientists. The regional administration coordinates the event which is also a main component of the work to promote regional smart specialization. The Regional administration is responsible for organizing the annual call for partners of the Festival, meeting with the partners to set the event agenda and a comprehensive promotion of the Festival (in Krakow and all participating cities, currently six).

After meeting with the regional office, the first day of the visit included also meetings at the Institute of Advanced Manufacturing Technology and attending the Awards Gala of the Małopolska Innovator Competition, during which the most innovative companies and products were recognized and awarded. The competition is organized by Enterprise Europe Network at the Technology Transfer Centre – Krakow University of Technology and by the Marshal Office of Małopolskie Voivodeship (http://fismalopolska.pl/?lang=en.) The second day involved meetings at the LifeScience Cluster, a cooperation initiative of several universities in Krakow, businesses and technology companies that supports cutting-edge research in the life sciences sector. The next stop was the Aptiv company, a high-end automotive company and world-leader in delivering solutions for automated/autonomous driving and automated mobility on demand, high-speed sensing and networking systems in vehicles. APTIV is also an active partner of the Innovation Festival. The final event in the study visit was the opening ceremony of the Researcher’s Night. We had an opportunity to attend a fun science show organized for school children in Kijów Centrum, titled “TIME MACHINE. Children who changed the world.” 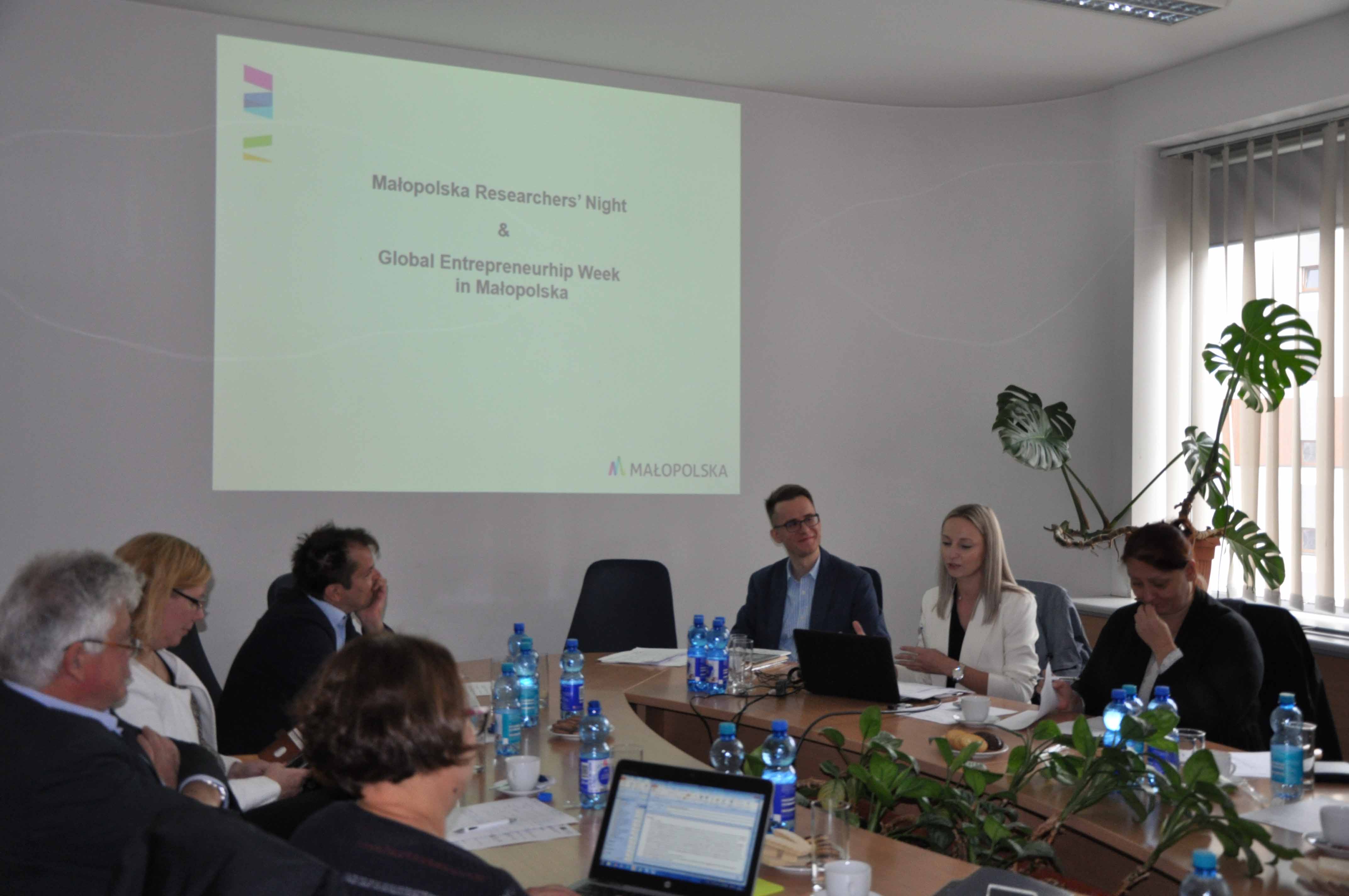