Predict the Air Pollution by Geo-locations in Sofia

Scientists from Faculty of Economics and Business Administration at Sofia University presented study for prediction Air Pollution by Geo-location in Sofia at the beginning of the Sofia Innovation Camp. The Air Pollution Predict Model was developed with the JRC financial and expert support.
This study is organized in cooperation with the Science meets Regions event (Sofia InnoCamp) on Energy and Climate Change and Social Effects of Climate Change, organized by Sofia Municipality (Sofia Development Association) in March 2019. The premise here is that the study would foster the debate on Sofia’s air quality - one of the biggest environmental issues of the city in later years.

The ultimate objective of this analysis is to deliver forecast for the next 24 hours per station using data from citizen and official science measurements. Firstly, there is bias correction of citizen science measurements, checked against the official measurement stations. The official comply with the EU directives on air quality monitoring can be used for regulatory purposes, but are limited in number (only 5 in the whole city). Citizen science stations have very good coverage of the city, but may carry instrumental biases – due to different measurement methods, different interaction with meteorology, etc.

Secondly a prediction model for next-day forecast of PM10 is built, using additional factor from meteorological parameters (from a weather forecast) and topography satellite data. When there are qualitative prediction results, the data is mapped over geo-locations of Sofia.

The authors of the model Assoc. Prof. Boryana Pelova and Assoc. Prof. Angel Marchev shared that “There is a lack of confidence from a certain group of citizens to the data from the official sources. At the same time, the popularity of the civil air quality sensors system is based mainly on the fact that the data is locally oriented (the quarter of the neighborhood) and they give to residents of Sofia some local context and understanding. It is important to emphasize that no one challenges the immense technical superiority of official measurement stations over civil network sensors, but the popular opinion is that the five official stations do not meet the needs of citizens to predict time and place.”

Also, the Prediction model uses additional meteorological data (weather forecast) and topographic satellite data. When the qualitative results are predicted, the data are mapped in geo-locations of Sofia.

"These are well-spent money," said Charlina Vicheva, Deputy Director of the DG Joint Research Center, European Commission (JRC) after hearing the presentation of the Air Pollution Forecasting Model in Sofia through geo-locations. The data and methodology are already published on sofiaPM10.report and can be used by everyone. 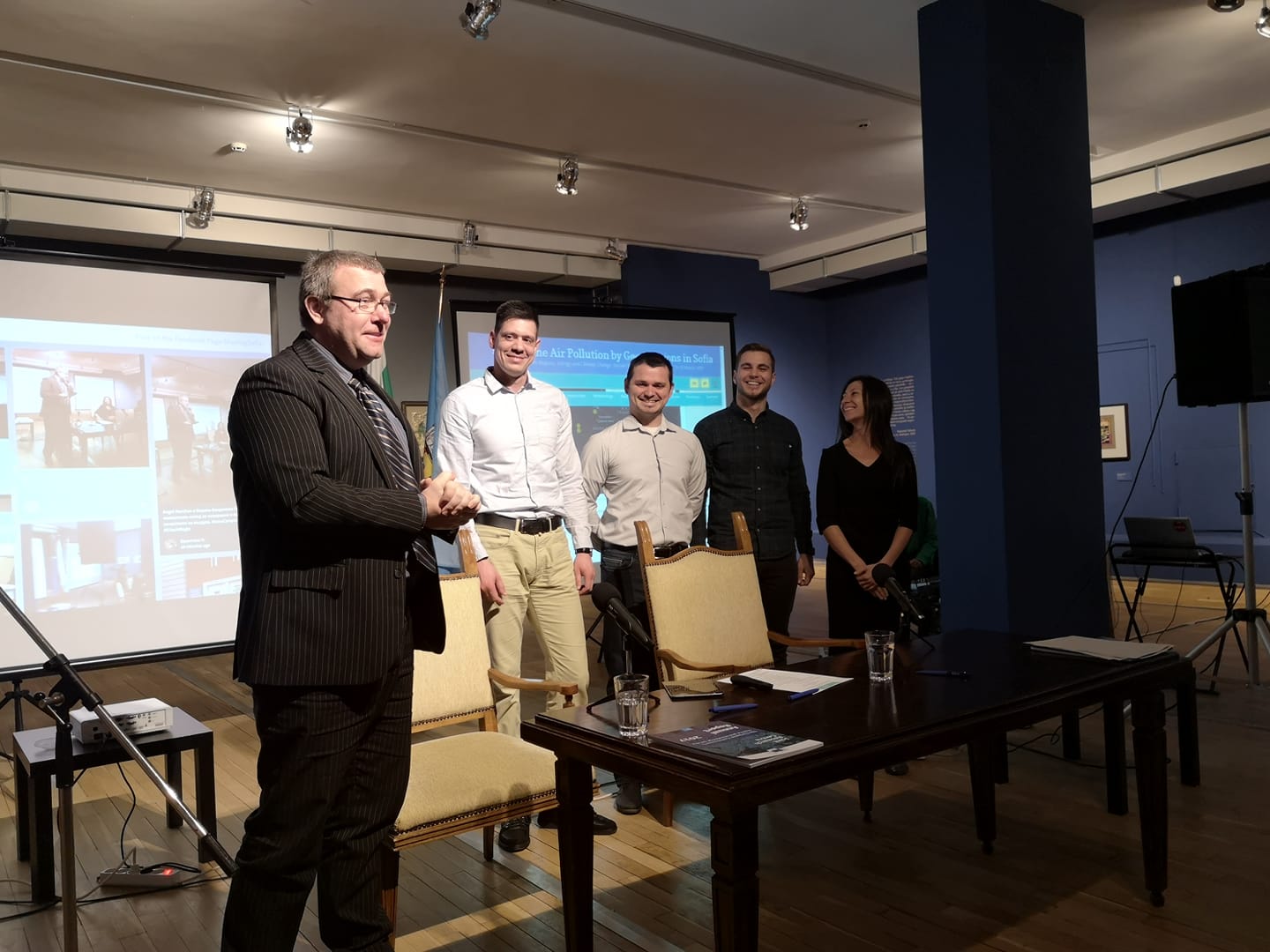 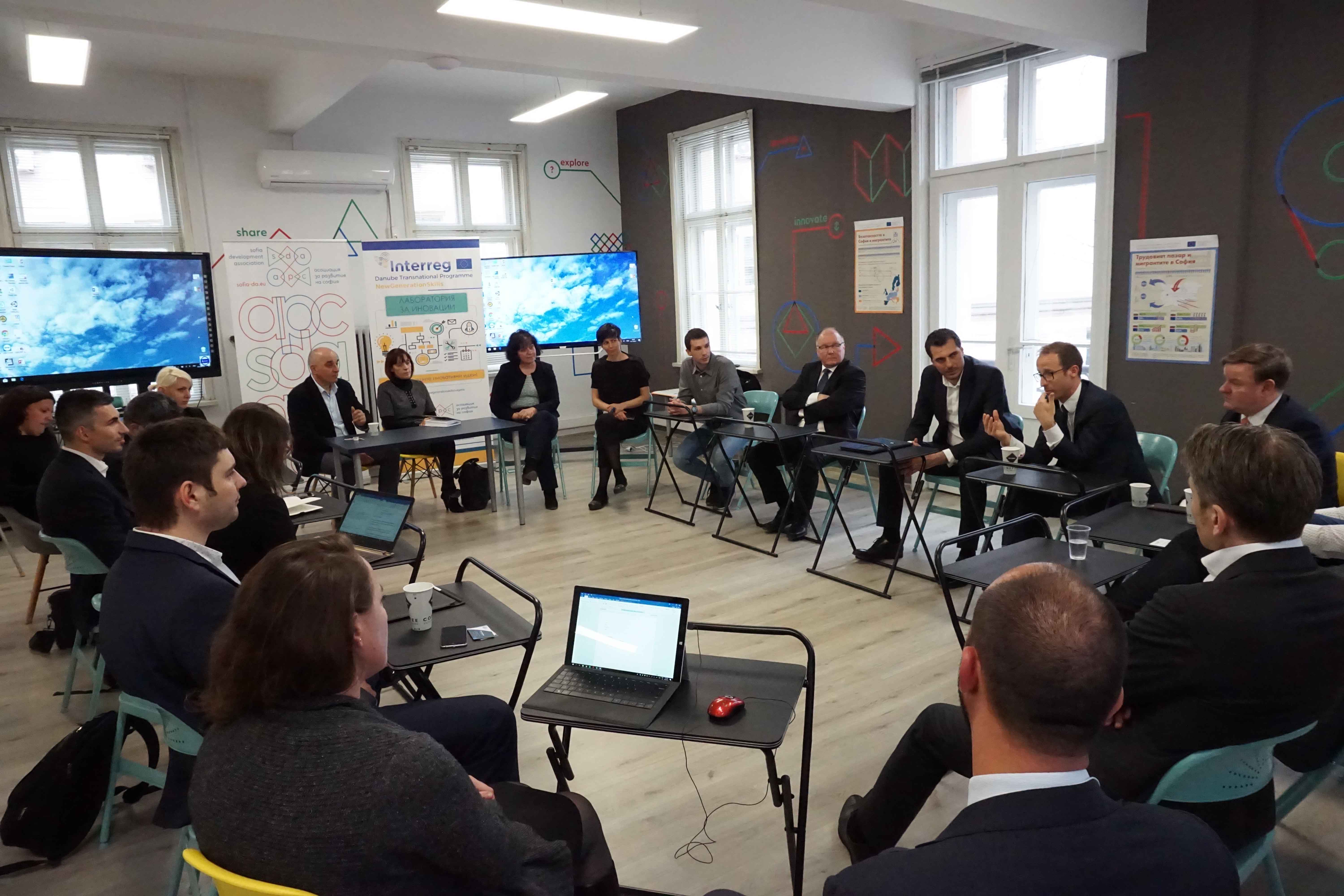 Leaders of the cities of Prague, Vienna, Tallinn, Aspen (Austria), Tampere (Finland) met on March 26, 2019 in SofiaLab with Sofia municipal councilors, representatives of Sofia Development Association and Green Sofia, municipal enterprises and structures, to share what they have learnt on their road to smart governance. The development and modernization of big cities bring about new types of problems. The best solutions are to be found in the “smart city” concept.

On 21st of March 2019, in Karlsruhe was held a meeting under the project „Finance for Social Change“. The topic of the training of trainers event was „Knowledge exchange on public benefit support to foster social enterprises“. Partner organizations from Hungary, Austria, Germany, Romania, Slovakia, Slovenia, Croatia, Serbia and Moldova presented good practices that have led to a change in policies at local and national level. As a partner in the project, SDA presented the Sofia Innovation Fund, which is a good example of public-private financing of social innovations. The participants exchanged experience and discussed in details the strengths and weaknesses of the practices. The practiced presented and lessons learned will provide a basis for assessing the readiness for socially-oriented investments in the Danube region of the European Union. 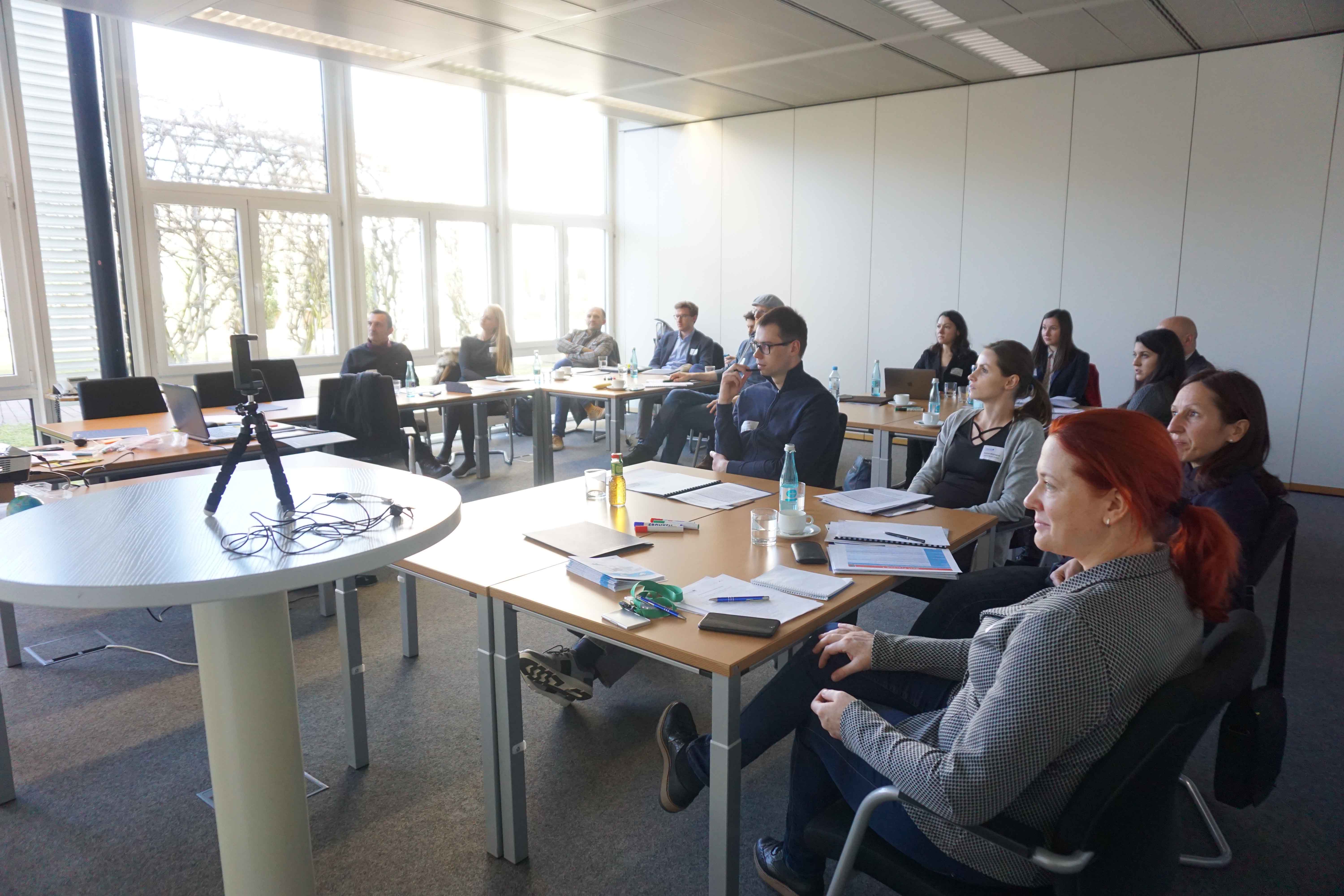 СAs one of the coordinators of the Digital Transition Partnership in the framework of the Urban Agenda for the EU, Sofia together with the city of Oulu, Finland, and Estonia, developed a joint Action Plan with pilot projects the results of which will serve to improve the European policies in the area of legislation, funding and education in the digital era.

One of the instruments Sofia took the leadership to develop and test is entitled Digital Neighbourhood. In a society where we are increasingly defined by our access to information, no access to technology and skills to use technology well would leave one in the digital dark ages. This is what the digital divide is about, and sealing this gap is critical for the local development.

Sofia Municipality, Sofia Development Association and Sofia City Library held an extended consultative meeting and workshop on March 21, 2019, at SofiaLab, which brought together 30 experts from the local administrations, relevant ministries and national authorities, academia and business. The aim of the seminar was to start the development of specific measures to overcome the digital divide like more renters for community access to technology and digital services, more trained technical staff to serve the citizens, programmes for training and skills building. 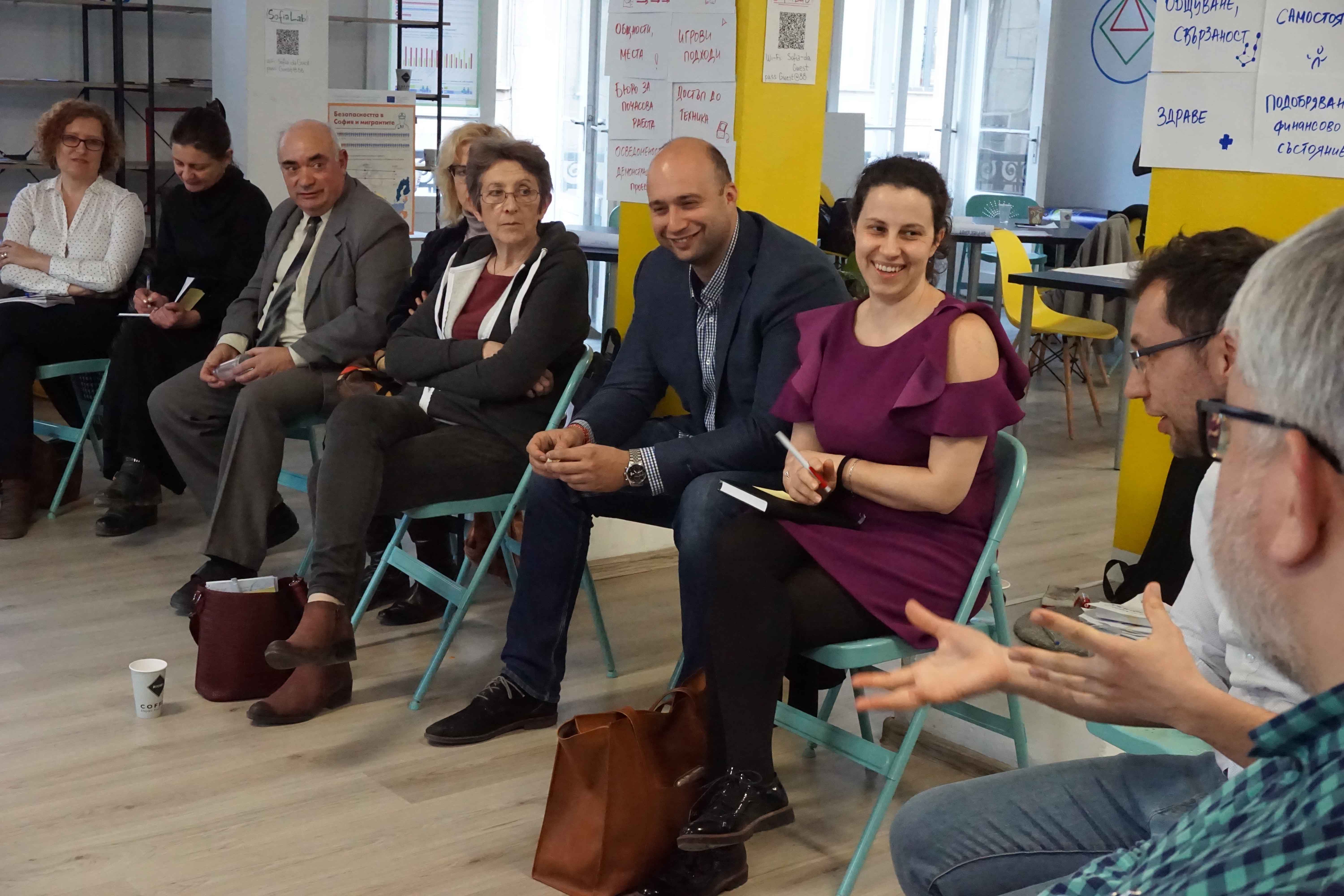 The InnoBridge Experience Book reflects the first 3 years of the interregional learning process going through series of Peer Reviews, Capacity Building Workshops, Staff Exchanges, Study Visits and in-depth analyses. The Book gives an overview of the InnoBridge process and methodology alongside with the ultimate achievements within this
period.

Sofia Development Association is an InnoBridge project partner, and has contributed to the publication and the experience-based policy recommendations towards R&D commercialization, shaped by the strengths and challenges of each partner region, its regional perspectives and smart specialization.

The InnoBridge project is cofunded by EU’s ERDF.

Sofia Innovation Camp will be held from March 29 -31st, at Sofia City Gallery, as part of the pilot project “Science Meets Regions” of the Joint Research Center of the European Commission. Sofia Municipality, in partnership with the Faculty of Economics and Business of Sofia University, Sofia Development Association and Green Sofia, offers three complex challenges to the stakeholders to brainstorm and use collective intelligence to identify solutions and develop prototypes. The Innovation Camp methodology relies on the diversity of participants that would generate innovative ideas.