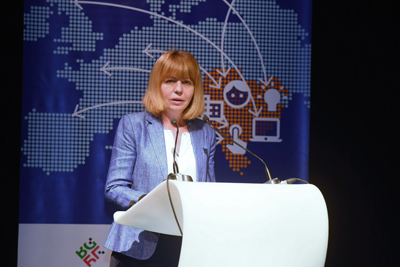 “Sofia Municipality is the first municipality in Bulgaria to develop, adopt, and currently implement an Innovation Strategy for Smart Specialization of Sofia, The strategy lays out information and communication technologies and creative industries as priorities for the city,” said Mayor of Sofia Ms Yordanka Fandakova at the “Smart Specialization and Technology Transfer as Innovation Drivers for Regional Growth” conference, organized by the Joint Research Center and the European Commission. Taking part in the conference were EU Commissioner Mariya Gabriel, Deputy Prime Minister Tomislav Donchev, and President of the European Committee of the Regions Markku Markkula.

"In the last several years, Sofia Municipality is actively involved in supporting events connected to digital technologies and innovations, such as Webit.Festival and Innovation Explorer, and, in just a few weeks in June, Sofia will again be the host of Webit.Festival Europe. With the cooperation of of EU Commissioner Mariya Gabriel, Sofia will host the Digital Assembly, and as part of which is organizing the Balkan Hackathon,” said Fandakova.

In recent years, Sofia has been developing as the largest Municipal economy, outputting 40% of the country’s GDP, and is continuing to prove itself as an attractive place for investment.

Information technologies are among the fastest growing industries in Sofia. They comprise 5,7% of the economy and generate a growing part of Bulgaria’s exports. The IT sector employs 40 400 workers in Sofia, one third of whom are women.

Over 100 IT companies are currently working in Sofia, additionally developing highly qualified specialists. One of the primary stimuli for new investors in the capitol is a well-prepared work force, with over 50% of the active population carrying a university degree.

The Mayor also noted that Sofia is the first municipality in Bulgaria undertaking the process of opening its data. With the support of programme “Europe” and the cooperation of Sofia Development Association, an open data platform is developed, starting with the publication of the summary budget of Sofia Municipality, as well as the projects under programme “Culture” and public procurements. Currently, Sofia Municipality maintains 27 open datasets. 2018 forsees the opening of 23 more.

In addition, the city is developing free public WiFi zones, including in public transport. The Sofia Metro has full free WiFi coverage. Sofia Municipality is also applying as part of project WiFi4EU for financing and assisting the installment of public WiFi hotspots.

"Sofia is among the coordinators of the Urban Agenda for the EU, in which the EC and multiple European cities are in direct partnership. Sofia is coodrinator of the Digital Transition partnership along with Estonia and Oulu, Finland. The aim of the partnership is to identify and propose new measures and solutions for improving EU legislation, financing municipal policies and education programs for making a smooth digital transition in Europe,” added Fandakova.